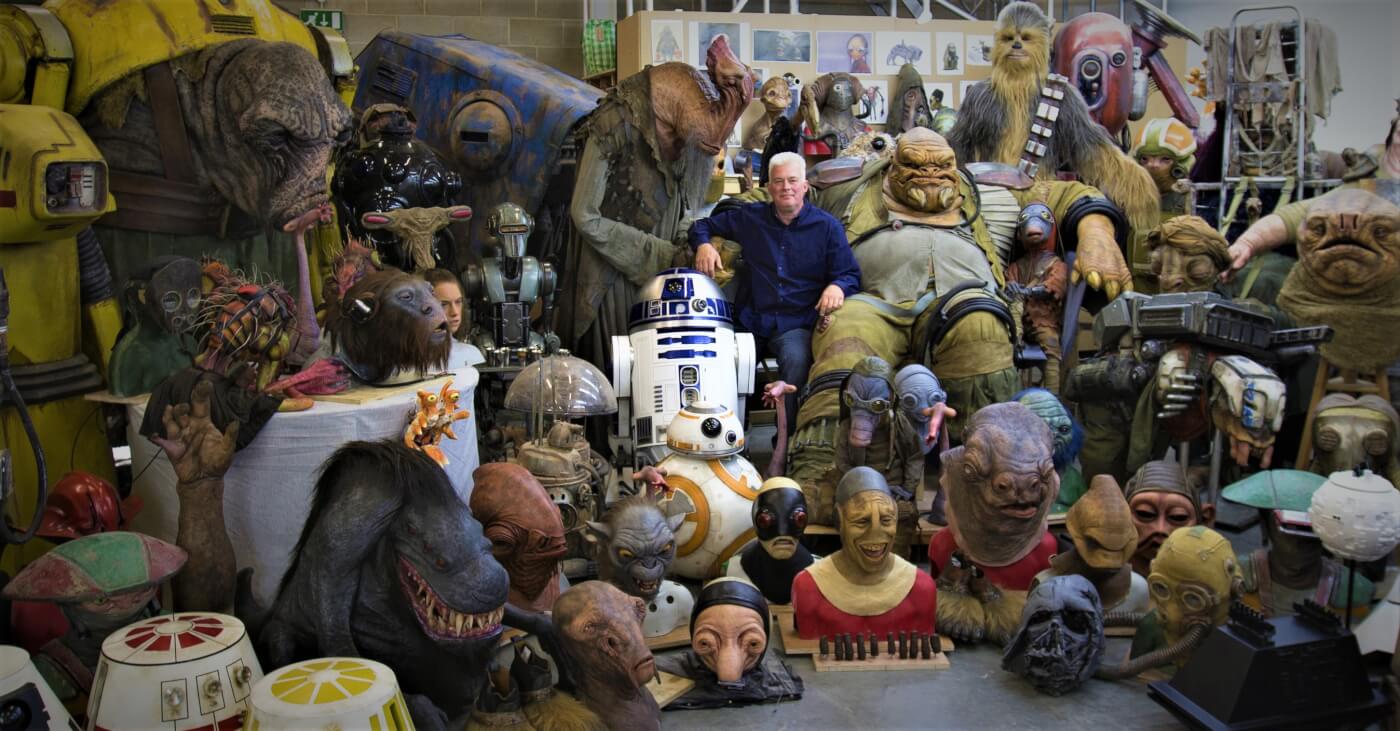 When you’re part of a team for a website like this one, you hear lots of interesting rumors. Some end up being true, lots end up being false, and plenty end up somewhere in between. We usually apply a filter to what we end up sharing online, it’s not our wish to ‘scoop’ the production, or more potently, spoil the story. However, sometimes interesting news comes in that isn’t a spoiler of any sort, but rather just an update on the happenings of the production.

We’ve all heard Colin Trevorrow and J.A. Bayona say that animatronic dinosaurs would be featured more heavily in the upcoming Jurassic World sequel, and likely all assumed the same franchise alumni would be involved in creating them. However, a couple of months ago we heard an interesting rumor that Legacy Effects would likely not be involved with the Jurassic World animatronics – this was surprising to us, as Legacy essentially is the studio that did the practical FX for each Jurassic film (in actuality Stan Winston Studios did Jurassic Park – JP3, but when that studio closed after Stan Winston’s passing Legacy was formed by the key members of the old team).

Upon further digging, we heard that in fact Neal Scanlan’s ‘Star Wars Creature Shop’ team would be heading the animatronic front this time around. We sat on this news for some time, and within a few weeks of learning it saw a new update to the Jurassic World sequel on IMDB – Neal Scanlan had been added. Now this was hardly confirmation, as essentially anyone can edit the IMDB page, but as the Neal Scanlan rumor had not gone public it did pique our interest. The probability of this tipoff was looking more credible, especially when you look at the circumstances practically.

Jurassic World 2 is operating primarily out of Pinewood Studios, London – this studio is also home to the ‘Creature Shop’ of Neal Scanlan and the numerous talented artists he enlists. It would make sense for JW2 director J.A. Bayona to work with a team close to the base of production, as it would make overseeing and collaborating with their work all the easier. Further, animatronics are usually used in a studio setting rather than on-location, and moving the work from Legacy in California to Pinewood in London would certainly be an added expense. Logistically, it makes sense, and once you look at Neal Scanlan’s pedigree with the recent Star Wars outings it all falls nicely into place.

Our suspicions were mostly substantiated when certain ‘Star Wars Creature Shop’ artists confirmed their involvement in the upcoming sequel. For the sake of anonymity, we aren’t going to publish – while these were done publicly, we’re unsure if the studio would react negatively (it’s not our intention of causing any internal conflict simply due to people being excited about their new gig). However, this certainly is exciting news, as the practical FX work done on ‘The Force Awakens’ and ‘Rogue One’ is nothing short of fantastic – but the news is also bittersweet.


Assuming the first part of the rumor about Legacy not being involved at all is true, this is a bit of a bummer. This will be the first Jurassic Park movie artists such as John Rosengrant have not worked on, and the sudden passing of the torch was not expected by myself. Of course, there is a chance that Legacy Effects is still involved in some capacity – we have reached out to the studio for comment, but as of this time have not received a reply. (It’s worth noting that IMDB lists several Legacy Effects artists, but as previously pointed out IMDB is not the most reliable for these matters.)

With that in mind, if the team behind the animatronics had to change, Neal Scanlan and the Star Wars Creature Shop team would be my first choice. They’re loaded with incredible talent and enormous passion, and I think they have done phenomenal things on the new Star Wars films. That said, their more complex creations seem to favor more fantasy humanoid designs, and something like dinosaurs for the Jurassic Park franchise would be a huge change in style. I imagine they’re entirely up for the challenge, but I do hope they’ve had ample time to prepare, and blow away audiences once again. While I feel a pang of sadness to hear that Legacy will likely not be involved this time, I won’t deny that I’m incredibly excited to see what the new team creates – until then, here’s a few videos on how the animatronic Jurassic Park dinosaurs were made!


Are you excited for the team behind ‘The Force Awakens’ creatures to tackle the Jurassic World sequel animatronics? Sound off in the comments below, and as always stay tuned for more news!

With cameras set to start rolling in less than a month, it’s no surprise that we’re beginning to hear of more locations getting the confirmation that they’ll feature in the sequel to 2015’s Jurassic World. A few days ago a Spanish website confirmed that Brecon Beacons in Wales was a location, and we already know that the islands of Hawaii will be utilised for filming, along with Pinewood Studios in London.

“I had Harrow Council Planning Department visit my house, to approve my new extension. They saw my Jurassic Park collection, and said the filmmakers were scouting Pinner (an area in Harrow) for filming”

He went on to say that they didn’t have any other information to offer other than that. The area of Pinner is described as a wealthy area of the London Borough of Harrow in northwest London.

Without any further information we have to take news like this with a pinch of salt – and it’s unclear in exactly what capacity the area of Pinner might be used. Due to its relatively short distance to Pinewood Studios, it’s a logical location for the production, and it may even be that they’re only shooting an interior location here, which could stand in for anywhere in the world. This in no way confirms that the actual city of London will feature in the sequel – but at this point, it could.

Either way, this little rumour is reminiscent of the days before social media, when internet message boards and word of mouth were the main source for film news. Council Workers liking the look of someone’s Jurassic Park collection and handing out some information sounds like it was pulled straight out of 2002! Huge thanks to Dijeirusan for sharing!

Have you heard any rumours about filming? Shoot us a message and we’ll devour it. 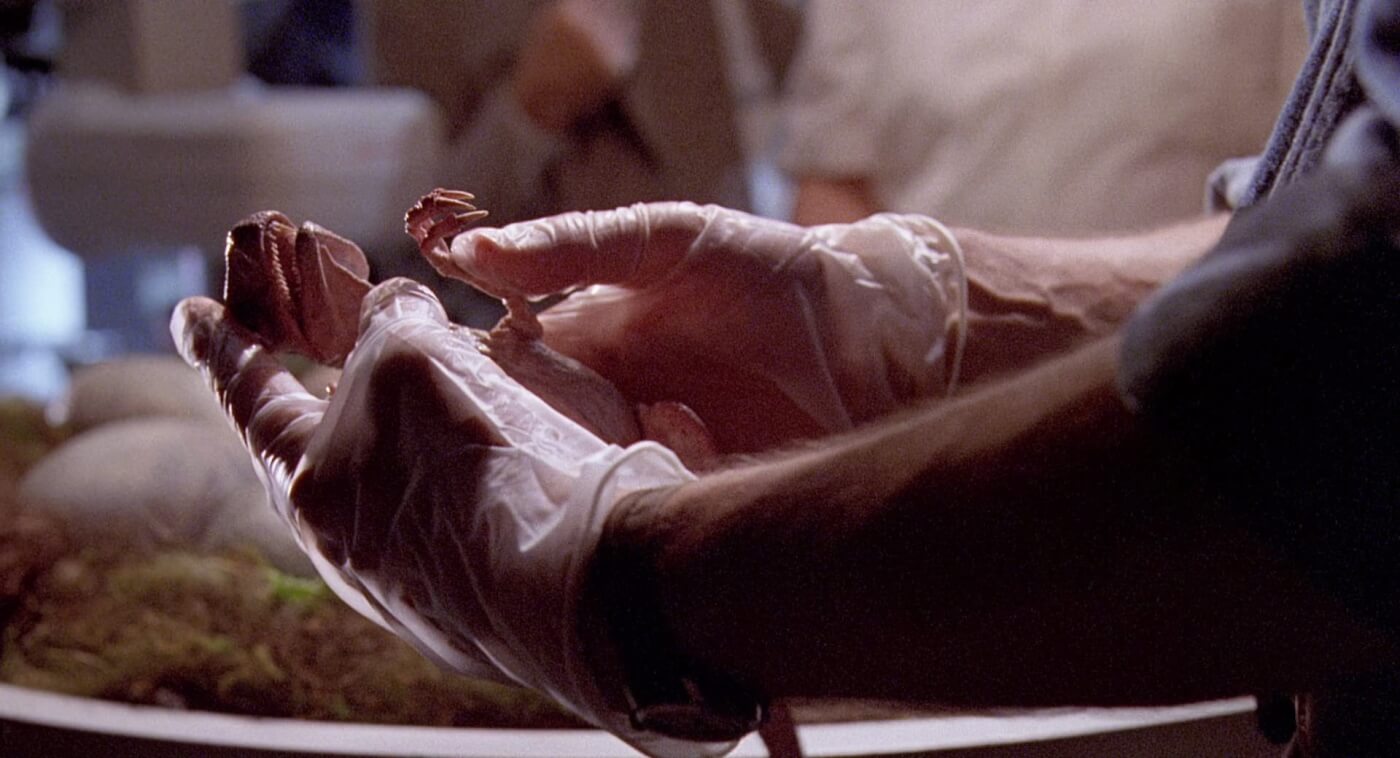 Last week we shared storyboards that show an alternate ending for Dennis Nedry in Jurassic Park. Those storyboards were posted by Jurassic Time creator Derrick Davis, who has spent the past few weeks combing through the Early Sequence Storyboard Binder which he won at Phil Tippett’s online auction.

Today Derrick shared a new sequence, one that never made it to the final screenplay but was strikingly similar to the original scene in the novel. The sequence takes place when the park guests are introduced to the baby Velociraptor, which is revealed as so by Chief Geneticist Dr. Henry Wu. In the movie you’ll remember that the guests witness the baby Raptor break out of its shell and are concerned when Dr Wu. reveals the breed.

In these storyboards however, we can see a different scene unfold. It takes place in the Nursery, and an already hatched baby Raptor is perched upon a technician’s shoulder. Check out some highlights below!

Along with the full storyboards which you can make your way through here, Derrick also included the original script pages and a piece of concept art showing the Baby Raptor in action:

As I stated in the previous article, it’s incredibly exciting to see such old material now come into the spotlight for us all to see. If you liked seeing the above, have a read of the alternate ending to the Nedry vs Dilophosaurus scene, as well as the alternate storyboard shots for the Main Road sequence and an entirely different ending to the movie!

Thanks again to Derrick for sharing these! He also filmed the unboxing of his win, which you can see below:

Be sure to check out our latest podcast episode where we discuss all of the Jurassic World 2 news, along with the recently trademarked video game, Jurassic World: Survivor!