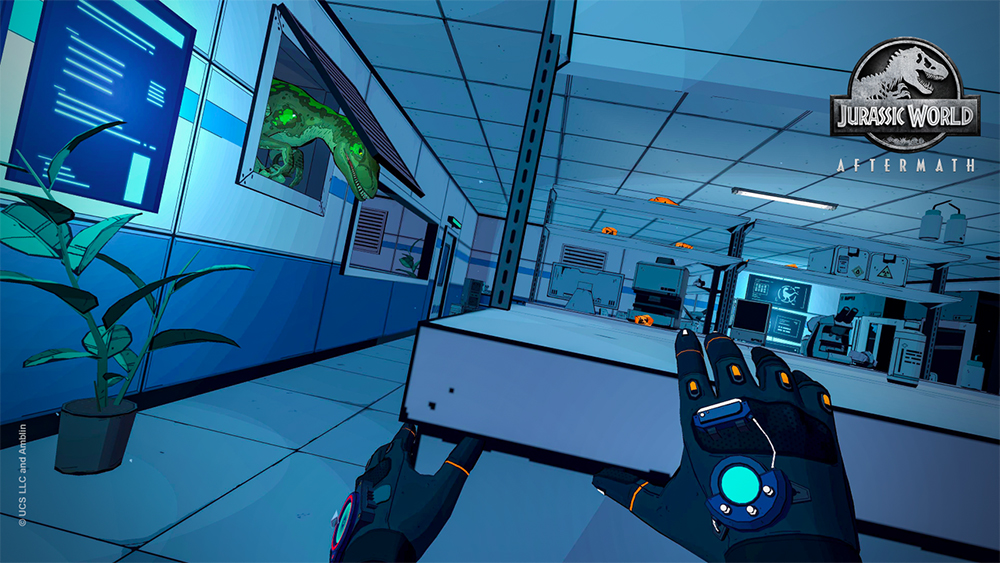 At long last, a Jurassic World game that is not mobile-exclusive or a park builder has arrived! ‘Jurassic World: Aftermath’ is an immersive VR survival adventure game hitting platforms like the recently released Oculus Quest 2, featuring plenty of Dino-action, and compelling storytelling.

Check out the launch trailer below!

We’ve been playing this game the last couple of days, and will have plenty of exciting content hitting our YouTube channel soon – but until then, here are some of the basics you need to know:

‘Jurassic World: Aftermath’ is set 2 years after the events of Jurassic World, prior to events of Fallen Kingdom. You play as Sam, a voiceless protagonist serving as an avatar to the players, who was hired for an illegal asset retrieval mission on Isla Nublar. You were hired by Dr. Mia Everett, an ex Jurassic World geneticist who worked under Dr. Henry Wu. Everett accompanies you to the island and watches your every move via a body camera, all while speaking to and advising you as you explore (think Halo’s Cortana to Master Chief – only if the Chiefs main talent was hacking computers, and hiding in storage lockers).

Dr. Everett’s past with Dr. Wu comes into play throughout the story, as their time working at the park was mired with admiration, tension, and spite. Working on the Velociraptor genetics program together, they eventually butted heads and had a falling out – which could mean life or death on the island as Everett tries to salvage the mysterious operation, and figure out just who she can call for help.

This game is lore rich, with fantastic voice acting by Laura Bailey (Everett), BD Wong (Wu), and Jeff Goldblum (Malcolm). The story has everything to do with Velociraptors, and there is a lot to discover within – including some reveals that may have relevance in 2022’s Jurassic World Dominion. There is a lot to unpack there, and we will have more in-depth coverage soon!

The gameplay is focused on navigating the facilities (including the canonically important, and expanded universe favorite Geothermal Power Plant), getting certain system back online to unlock doors, access computers, and try to survive – all while dodging three Velociraptors. If you’re wondering where these new raptors came from, why they look different, and why they behave differently, worry not – the game has compelling answers for all those questions within the story.

This game has zero combat elements: your tool is your wit, using computer systems to distract the raptors as you crawl through vents, take cover behind tables, or hide within lockers all while hacking into computer systems, or looking for items needed to progress. You also have a flashlight, which you can use to spook the occasional Dilophosaurus, which will try ambush you from ventilation openings. All of this leads to exciting ‘raptors in the kitchen’ like moments of cat and mouse tactics, much like Alien Isolation at a smaller scale and budget.

While this games budget is notably smaller, the voice acting is top tier, as is the music. The story is incredibly compelling – and certainly seems to be canon – but shorter, and clearly episodic, with an expansion coming in 2021. The cel shaded visuals looks crisp, though I really can’t help but wonder if a more realistic style would have been better positioned for the VR format. After-all, it’s all about breaking the confines of a screen and bringing that world to life for the player. Thankfully, the gameplay is well polished, and that’s what really matters.

If you have a VR capable device, or are planning to pick something like the Oculus Quest 2 already, this game is not to be missed for Jurassic story fans (Side bar: also pick up Vader Immortal and SuperHot — they really are must-haves for the VR platform. They made me a believer.). If you’re waiting for more information, fair play as well! Be sure to stay tuned to Jurassic Outpost, where we will have in-depth video coverage coming, including a Quest 2 unboxing, lore videos, and a formal review in the days to come! 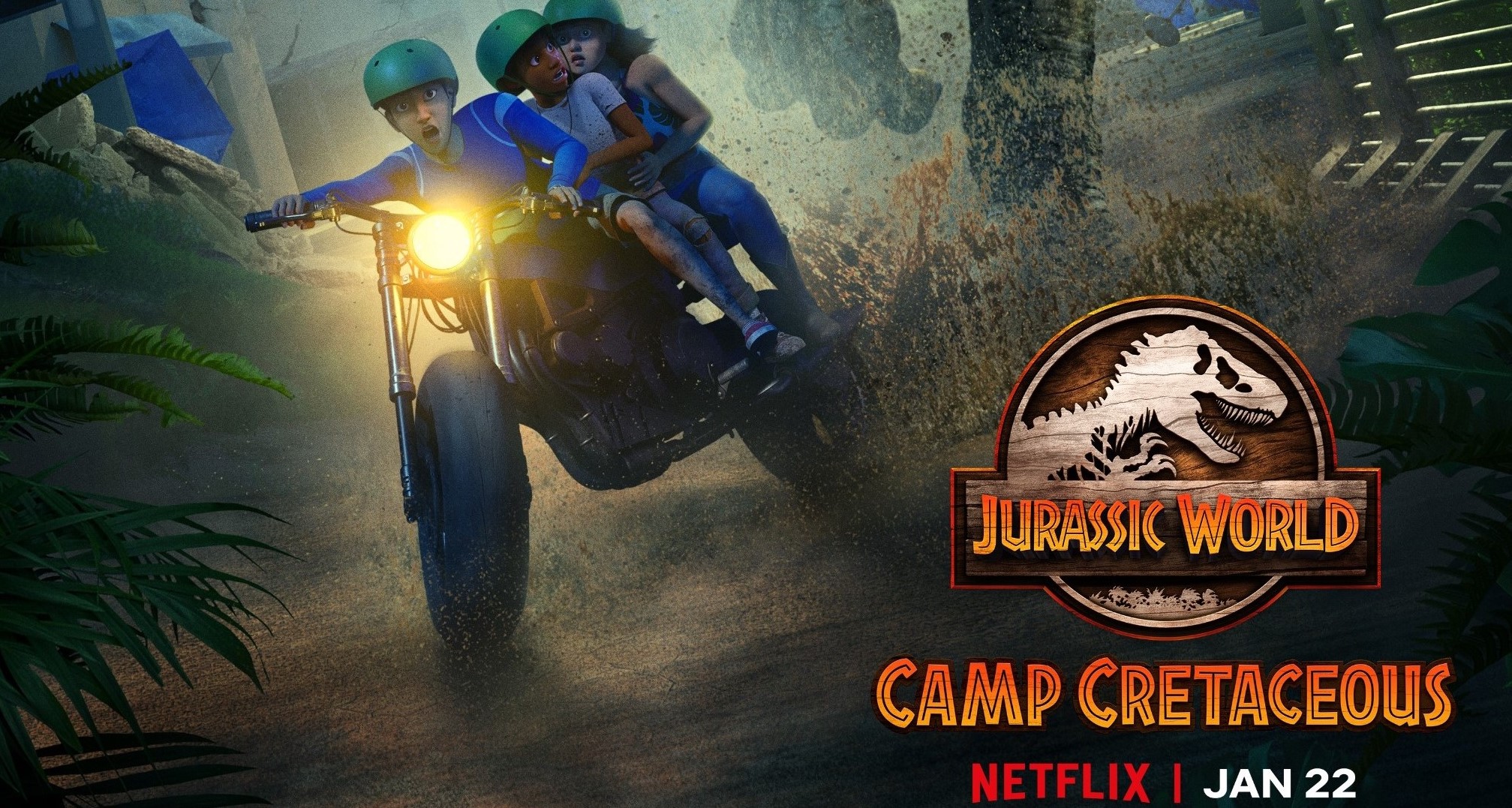 Adapt. Evolve. Survive. Everything’s at stake in the new ‘Jurassic World: Camp Cretaceous’ season 2 trailer, which will drop on Netflix on January 22nd!

Last season ended with the Camp Cretaceous kids trying to escape the island, only to reach the dock and find out they had been left behind. In the season 2 trailer, we see Darius, Yaz, Brooklynn, Kenji, and Sammy working together to figure out how to survive on an island inhabited by dinosaurs. The group heads for Main Street to find a phone, only to find the T.rex has set up her new lair there! This season promises more human-dinosaur interactions (some filled with danger) including compys, brachiosaurus, T.rex, baryonyx, ceratosaurus, sinoceratops, parasaurolophus, ankylosaurus, and many more! The trailer doesn’t feature, possibly everyone’s favorite character, Bumpy, who we last saw approaching an unconscious Ben who was separated from the rest of the campers last season.

What challenges will the campers face in season 2? Will Ben and Bumpy reunite with the rest of the group? Who else is on the island?

Let us know your theories and thoughts in the comments!

Coming in at an impressive 1/20 scale, this statue is over 18 inches tall and 14.5 inches wide! This limited edition statue features the terrifying scene where the velociraptors are surrounding our beloved characters as the T. rex bursts into the visitors center.

On a base imitating marble, after all Iron Studios spared no expense, with the film’s logo adorning the front, the fossils fallen at the feet of the figures, with Lex and Tim Murphy protected by Ellie Sattler and Alan Grant from two Velociraptors and the imposing T-Rex circling ready to capture the Velociraptor that is about to jump on Alan, Iron Studios presents it’s statue “The Final Scene – Demi Art Scale 1/20 – Jurassic Park – Iron Studios”.

After the collapse of the first park on Nublar Island, some of the most dangerous predatory species escape from their cages, including mortal Velociraptors. Seeking refuge and protection in the control room at the visitor center, doctors Alan Grant and Ellie Sattler, along with the children Lex and Tim Murphy, grandchildren of John Hammond, the park’s creator, are chased by raptors. The four protagonists run out of the control room and reach the main lobby, and they find themselves trapped when one of the predators advances to strike, jumping on their prey, is unusually captured in the jaws of a T-Rex, which invades the space in search of his hunting. Thus, the giant tyrant king of the dinosaurs, involuntarily becomes the savior of the group, when confronting and being confronted by the Velociraptors, giving the scientists and the children a chance to escape.

This unforgettable and striking sequence from the movie Jurassic Park, created by the master Steven Spielberg, once again comes to life at the hands of Iron Studios, which replicates the final scene of this 1993 Universal Studios superproduction. Faithful in the smallest details, relive that experience in your collection and don’t be surprised if in your subconscious you hear the unmistakable roar of the T-Rex every time you catch a glimpse of this piece.

This beautifully rendered scene is up for pre-order now for $899.99, with an expected release date of September 30, 2021. You can find all the information on Iron Studios.

Iron Studios also announced a brand new Muldoon and Raptor statue this week during their livestream! At 1/10 scale, they captured the moment when the “clever girl” velociraptor is jumping to attack Muldoon. The detail and paint on the raptor looks phenomenal in this first promotional image. While we can’t see much of Muldoon’s face, the attention to detail on his socks and thigh muscle is spot on. We can’t wait to see more images of this one!

Based on other 1/10 scale statues on Iron Studio’s site, we’re guessing this figure will be at least $150, so start saving now if this is something you’d like to add to your collection! We’ll keep all the Jurassic fans up to date as we get more information from Iron Studios in the coming months!

Let us know your thoughts on these new statue in the comments! Will you be adding either of them to your collection?

“I don’t get it. It says InGen on the side of that ride vehicle!”

Universal Orlando Resort released a first look at what park guests will be riding in when the Jurassic World Velocicoaster becomes a reality next year:

The reveal video describes the vehicles as “designed for speed” and “engineered for the hunt”, seemingly comparing them to a predatory velociraptor pursuing its prey.

The ride vehicles are strikingly futuristic and feature sleek proportions, bright lights on the headrests and front areas, and a shiny canvas of that signature ‘Jurassic World’ blue. The iconic Jurassic T. rex skeleton logo and the InGen company logo adorn the side and rear sections of the vehicles.

Gregory Hall, who has been responsible for creative and art direction on the Velocicoaster, shared more official images of the ride vehicles on Twitter shortly after the announcement:

The ride vehicles certainly look to be equipped for top speeds that will excite theme park and Jurassic fans alike. While their design aligns with the bright, modern aesthetic of the Mercedes vehicles and other designs that we have seen in ‘Jurassic World’ and beyond, it is a bit distanced from the established rugged, jungle safari theme found in previous Jurassic rides and attractions.

What do you think of the Jurassic World Velocicoaster ride vehicles? How excited are you for the ride to open next summer? One thing is for sure: we can’t wait to experience the Velocicoaster when it opens to the public Summer 2021.