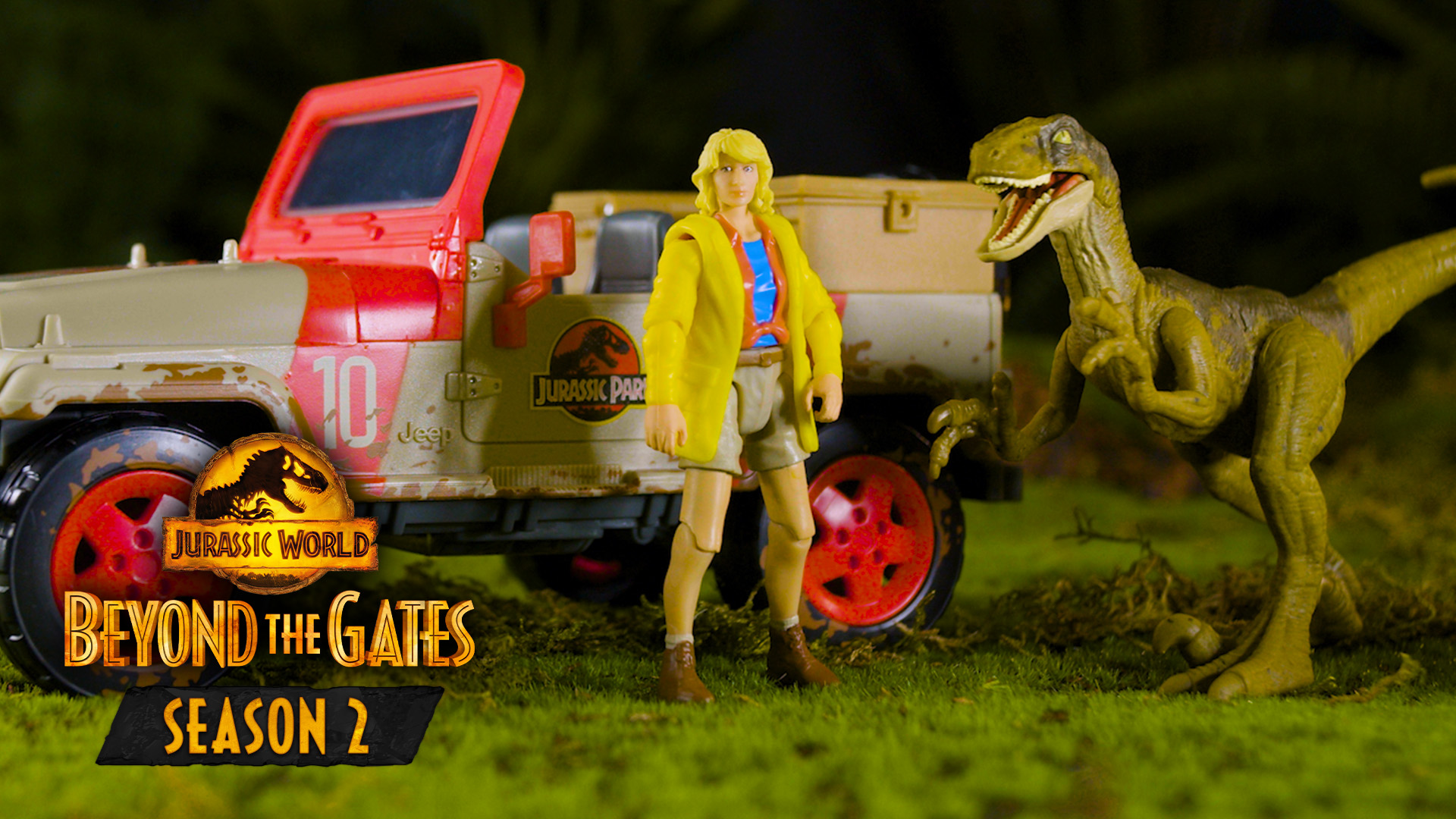 This month, the Legacy Collection welcomes a new set, the Dr. Ellie Sattler Risky Rescue Pack which includes raincoat Ellie, the number 10 Jeep, and a Velociraptor. Watch below:

In this final Beyond The Gates unveiling of 2022 Chris is joined by Mattel’s lead designer Gregory Murphy, who walks us through the process of designing and creating these Jurassic Park items!

The Dr. Ellie Sattler Risky Rescue Pack joins the #JurassicWorld Legacy Collection as the final #BeyondTheGates set of the year! 🦖

This set is a great addition to the Legacy Collection – be sure to check out the full episode for a deeper look and insight into the making of these Jurassic Park toys!

Have you enjoyed the reveals on Beyond The Gates this year? Share your thoughts down below!

Head to Target.com to pre-order now!

The new Camp Cretaceous interactive special has arrived on Netflix! Return to Isla Nublar and navigate your way across Jurassic World like never before.

After a big storm, food is scarce — and hungry dinos are everywhere. It’s up to you to help the Camp Fam survive in this thrilling interactive special. You drive the action in this crowd-pleasing adventure featuring characters from the world of “Jurassic Park.”

We have a new interview with showrunner and executive producer Scott Kreamer coming soon. We spoke with him about writing and producing the Hidden Adventure, the inspiration for the new character, Owen and the Tarbo, and we ask about the future of the campers…

Join the discussion on our social channels – links at the top of the page! 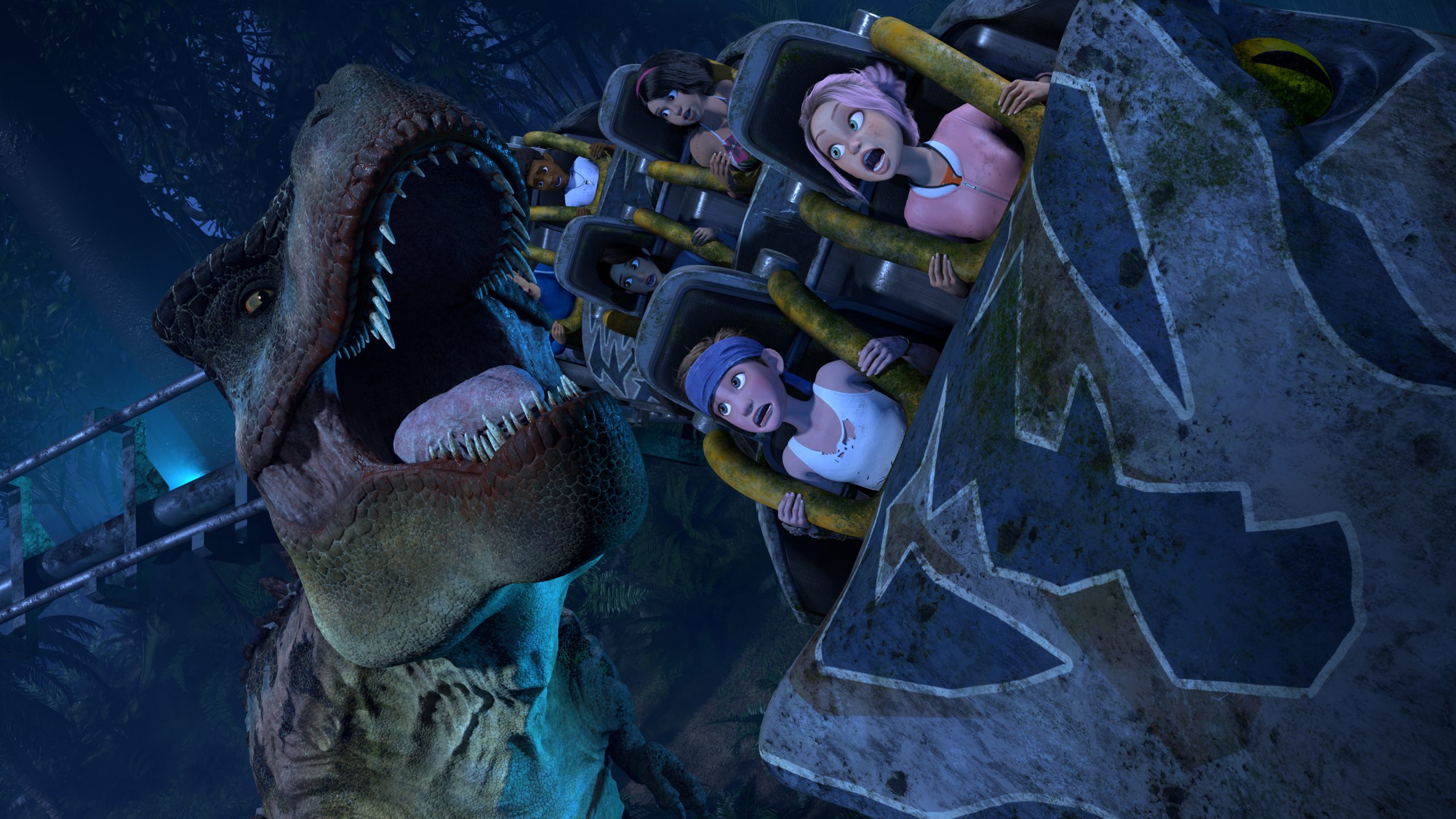 While the story of the stranded Nublar Six came to a conclusion during the 5th season of Jurassic World Camp Cretaceous in July, their stories aren’t quite done yet. Debuting this month on the 15th of November is the ‘Hidden Adventure’, a standalone interactive episode of Camp Cretaceous sandwiched between seasons 2 and 3.

For those unfamiliar, the interactive episode format was popularized with ‘Black Mirror: Bandersnatch” and act much like a ‘choose your own adventure’ book which you may remember from your childhood bookshelves or school book fairs. As a viewer you are met with key choices for the characters during pivotal moments, and those choices determine how (or if) the story continues to play out.

We’re excited to have the chance to debut an exclusive clip ahead of the Hidden Adventure’s debut where Darius, Brooklyn, and the other campers come between two giant dinosaurs in the tunnels of Jurassic World and are faced with one of the aforementioned choices.

Check it out below!

INTERACTIVE SPECIAL SYNOPSIS
In a standalone interactive adventure, the campers, desperate for food, work together to find a hidden stockpile. They must risk everything to uncover clues in search of its location, ultimately exposing previously unknown secrets of Isla Nublar.

ABOUT JURASSIC WORLD: CAMP CRETACEOUS
Inspired by the Jurassic World franchise, Jurassic World: Camp Cretaceous follows six teenagers chosen for a once-in-a-lifetime experience at Camp Cretaceous, a new adventure camp on the opposite side of Isla Nublar, who must work together to survive when dinosaurs wreak havoc across the island. From DreamWorks Animation, Universal Pictures and Amblin Entertainment, the series is executive produced by Steven Spielberg, Colin Trevorrow, and Frank Marshall, alongside executive producers and showrunners Scott Kreamer and Aaron Hammersley.

While this doesn’t tell us much about the story of what exactly this ‘Hidden Adventure’ is, it does give us an idea of the thrilling sequences and difficult choices you’ll have the chance to play out and watch. If you want to dig a little deeper into the clip, and what it all may mean, check out our breakdown analysis below:

As a fan of the choose your own adventure books (and also of the flawed yet fun ‘Jurassic Park the Game’) this is hitting all the right notes for me, and I can’t wait to explore Isla Nublar in an all-new way.

Hidden Adventure debuts on Netflix November 15th, 2022 – and remember to choose wisely, lest you potentially become a Carnotaurus chew toy.