No strangers to the Jurassic Franchise, Mondo have announced today the they will be offering Michael Giacchino’s ‘Jurassic World: Fallen Kingdom’ soundtrack as a 2 disc limited vinyl pressing. In record time too given the Official Release only dropped only days ago!

Here’s what Mondo had to say about the score:

“JURASSIC PARK: FALLEN KINGDOM is some of the most fun we’ve had in the theaters this year. And Giacchino’s score, which returns more to his penned JURASSIC WORLD score than the John Williams’ cues that bridged the gap in the last film, is evocative of classic Universal horror and haunted house movie scores, breaking from the pack of previous JURASSIC scores. Much like the film itself, Giacchino creates a fun, fresh take on the music of the “Man creates Dinosaurs… Dinosaurs eat Man” series.”

Hey Mondo? Can we get ‘The Lost World’ and ‘Jurassic Park III’ too please? The set goes up for sale this Wednesday at Noon (CST) over at MondoTees.com

Hold on to your butts, and grab a pair of headphones as you can now listen to the first previews of the Fallen Kingdom soundtrack!

The latest Jurassic Park sequel has already roared its way into overseas theaters, and one of the main things fans can’t stop talking about is the new soundtrack from Oscar-winner Michael Giacchino. Reprising his role of composer from Jurassic World, Giacchino has brought a darker style to the latest installment, embracing its extinction level and Gothic undertones. I’ve seen the film myself, and I cannot stop thinking about the music, and how badly I wish I had access to it already.

Thankfully, Entertainment Weekly has an exclusive first look at a track from the Fallen Kingdom Soundtrack! The new theme accompanies the opening of the film, and plays during some tense storm action at night prior to the title reveal.

Give “This Title Makes Me Jurassic” a listen below:

Previews for all these tracks are up on iTunes here, so get listening! While there are some returning themes, Giacchino offers many new flavours that are sure to turns some heads! If you need your regular dose of Jurassic however, I recommend giving the End Credits a listen!

Speaking to Entertainment Weekly, Giacchino had this to say:

“John Williams certainly set the tone, so I wanted to stay in that realm, but now here we are, five Jurassic Parks in, and I didn’t want to do the same thing I did on the last film. This film has a very different tone, so I basically went to the director, Juan Antonio Bayona, who I’ve known for many years, and said, ‘What if Bernard Hermann and Stravinsky had a baby who wrote the score for this film?’”

Digging Giacchino’s new vibe, or missing that classic William’s tone? Sound off below!

Michael Giacchino is no stranger to the Jurassic franchise. Before composing the music for Jurassic World he wrote and composed the soundtracks for both Jurassic Park: Warpath and The Lost World’s PlayStation game – which are still considered fan favorites by many.

It was no surprise that the composer, who handles multiple projects a year, would return to the franchise.

With the sequel headed for US cinemas on June 22nd, Michael Giacchino’s score will be available for purchase and digital download on June 15th! The date can be seen on the Amazon listing for the soundtrack but unfortunately no other details have been revealed.

Over the past few weeks during the scoring sessions for Jurassic World: Fallen Kingdom the composer shared a number of images and videos from inside the studio, revealing new music and the return of key themes and more importantly, revealing his excitement to be back and working on Jurassic.

Jurassic World: Fallen Kingdom hits theatres on June 22nd in the US and earlier in the UK and Europe – and you’ll be able to purchase Michael Giacchino’s score on June 15th!

Thanks to Derrick for sending this our way!

Over the past few days, Jurassic World composer Michael Giacchino has hard at work recording the Fallen Kingdom score.

While the recording session has been occurring behind closed doors at the world famous Abbey Road Studios, director JA Bayona and Michael Giacchino himself have been sharing previews online. Following up on the first preview from Wednesday, Giacchino posted an updated reprisal of ‘Ye Old Visitor Center‘ yesterday which again returns to the classic Jurassic Park themes with an uneasy and somber tone.

Moments ago, JA Bayona shared another sample of work, this time a new track which apparently ends the film. Listen to both below!

If JA Bayona’s tweet is to be taken literally, and that music closes out the film before the credits roll, then it’s safe to expect quite the dramatic closing scene, setting up a higher stakes Jurassic World 3.

While it’s too soon to speculate about the third film in the latest Jurassic trilogy, this certainly has us curious. Of course, this tease also has us eager to hear more of the soundtrack from Fallen Kingdom – Giacchino has had no small task set out in front of him: creating music for Nublars demise. Whatever new themes and classic reprisals close out the home and setting of Jurassic Park it is sure to be bittersweet.

What do you think of the latest teases, and what do you want to hear from the Fallen Kingdom soundtrack? Sound off in the comments below, and stay tuned for the latest news! 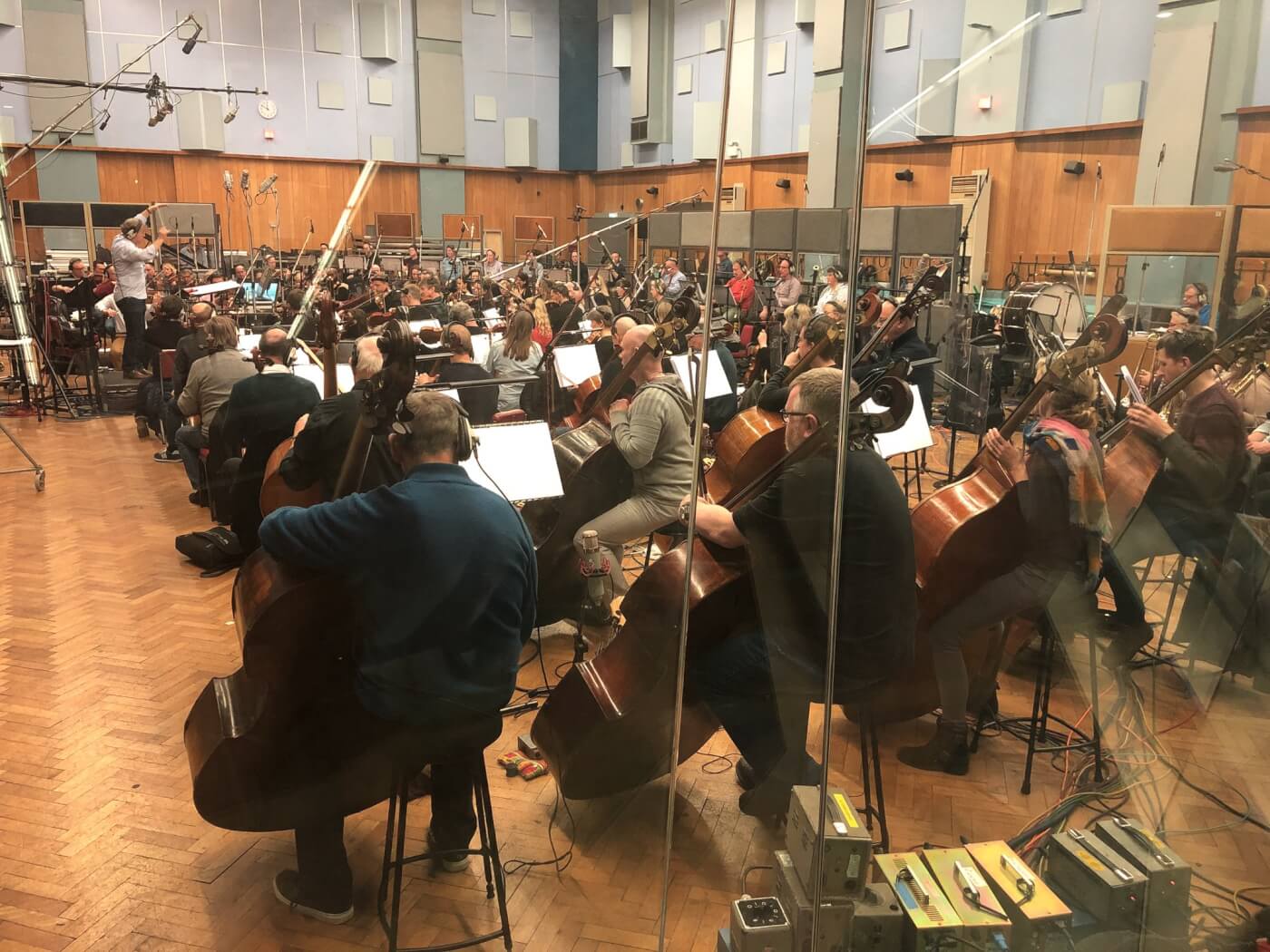 In the one minute and six second clip you will recognize that it is a new version of “As the Jurassic World turns” from his 2015 score for Jurassic World.

In a reply to Bayona’s tweet, Giacchino posted a photo confirming that that Ludwig Wicki is conducting the orchestra.

In a tweet that was accompanied by a photo taken inside the recording studio, the composer revealed the news to fans, which signifies that the film itself is very likely picture locked.

Michael Giacchino has previously composed the score for Jurassic World in 2015, and has a history of working with the franchise with credits that include video games Warpath: Jurassic Park and The Lost World: Jurassic Park.

With J.A. Bayona’s Jurassic World sequel, Fallen Kingdom looking like it’s adopting a slightly darker route than it’s predecessor, do you hope the music follows suit? Do you think we will be hearing more of a The Lost World: Jurassic Park inspired score for our second outing to Isla Nublar, this side of the millennium?

Only time will tell, so stay tuned to Jurassic Outpost for all the latest news and be sure to follow the man himself for hopefully more Fallen Kingdom teases. 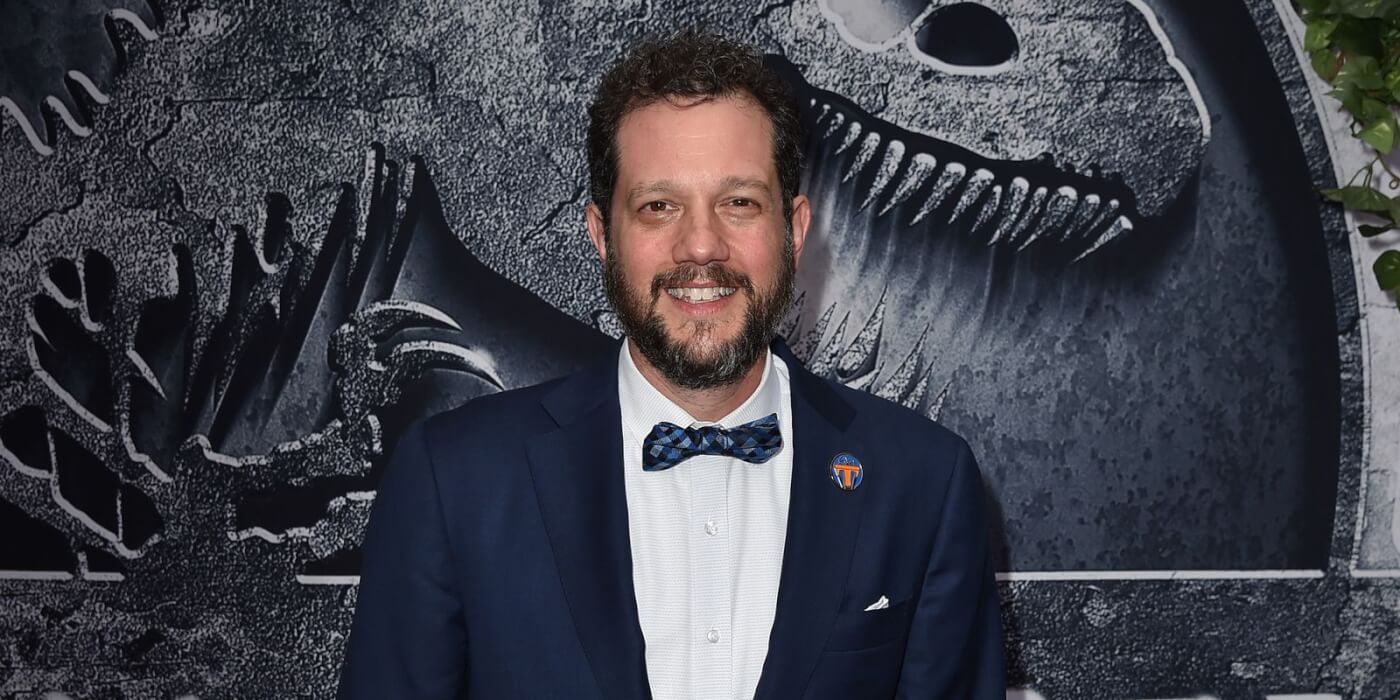 In an exclusive interview with Collider, Giacchino briefly touched on Jurassic World: Fallen Kingdom, sharing how excited he is to work with his good friend J.A. Bayona and that he actually has already seen a cut of the film.

COLLIDER: And as for Jurassic World: Fallen Kingdom, I mean we got the idea through the hiring of J. A. Bayona that it’d be a bit of a darker film and they said that as well, but it very much looks like it might have this kind of thriller/horror aspect. Is that something that’s kind of reflected in the score?

GIACCHINO: Well, again, haven’t even written a note of music for that one yet either (laughs).

GIACCHINO: But I have seen it, and yes. I love J. A., he and I have known each other for many years, we’ve been friends and we’ve been hoping to work on something together so this, I think, is gonna be a really fun project to do with him. I love his storytelling sensibility and I’m excited to take the storytelling and the franchise somewhere new and different and perhaps that is darker and more moody and more suspenseful. But again, I gotta wait and see where it takes me, but looking forward to that one too.

Michael Giacchino with J.A. Bayona in 2013

What do you think of Giacchino’s comments on working with J.A. Bayona on Jurassic World: Fallen Kingdom? Let us know in the comments below and on our forums!

Special thanks to Fede and Matt on Twitter for the heads up on the interview. 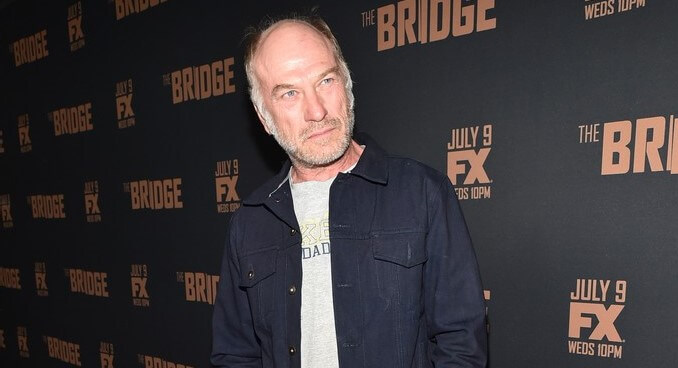 As Jurassic World 2 gears up to film in just a few short weeks, the upcoming sequel has shown no signs of slowing down when it comes to adding cast members. Variety just exclusively revealed that Ted Levine has joined the cast, though have no details on the role he will be playing.

Ted is a fantastic actor, with a large pedigree of projects under his belt, perhaps best known from his role of the troubled and twisted ‘Buffalo Bill’ in ‘Silence of the Lambs’. Some of Ted’s other films include ‘Shutter Island’ and ‘American Gangster’ and has also had staring roles in TV shows such as ‘Monk’ and ‘The Bridge’.

Ted has played a variety of roles, and can play a fantastic pessimist – whether he’s filling an antagonistic role remains to be seen, but I certainly could imagine him spearheading InGen’s exploits. On the contrast, I could see being quite outspoken against dinosaurs and perhaps even filling an Malcolm like role. A third option that occurs, however unlikely, is that he may be filling and recasting the shoes of Lewis Dodgson – something long awaited since the first Jurassic Park film.

Are you excited with the cast so far? Sound off in the comments below, and stay tuned for the latest news! 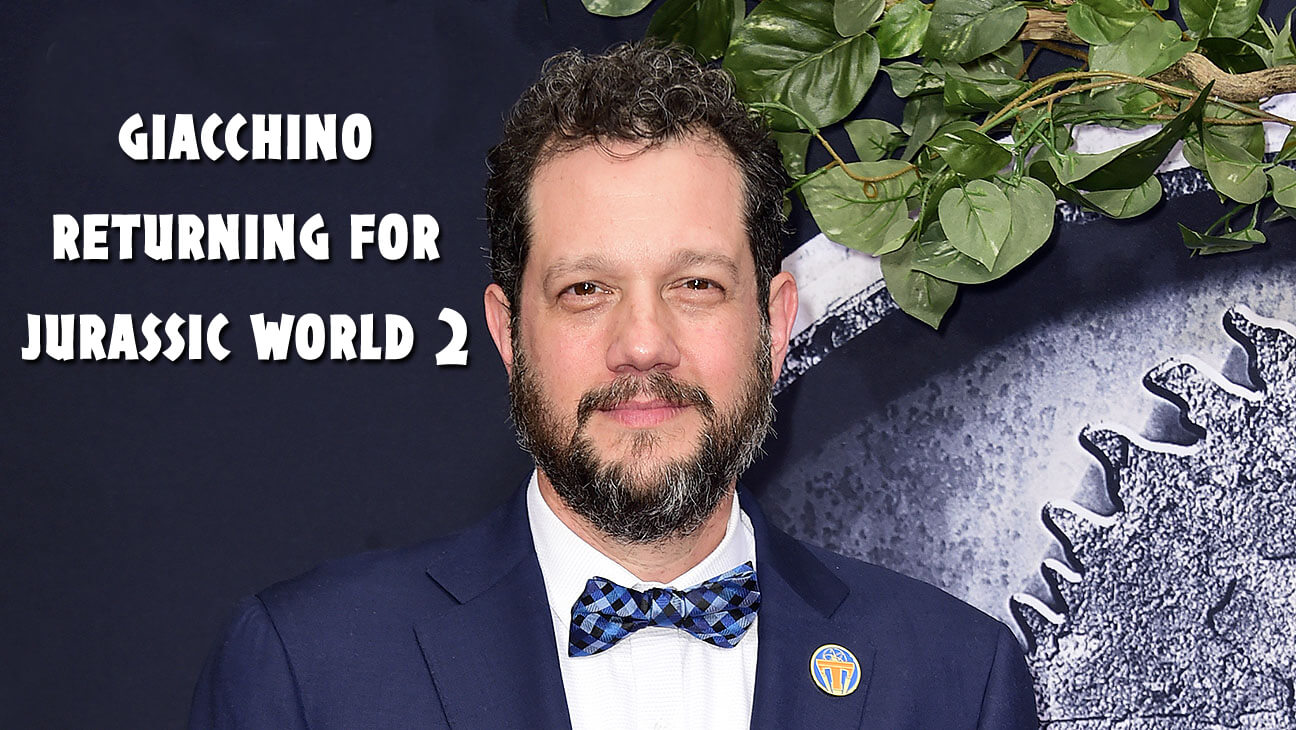 The Hollywood Reporter today dropped a juicy news nugget confirming that Jurassic World composer Michael Giacchino will be returning to compose the score for the upcoming Jurassic World sequel due in 2018.

While Giacchino did not discuss the Jurassic World sequel during the interview, the Hollywood Reporter mentioned that the film is on his to do list along with multiple other films.

Giacchino took a break to speak with THR between Rogue One and his next geeky gigs, which include Marvel’s Spider-Man: Homecoming, War of the Planet of the Apes, the next Jurassic Park sequel and Pixar’s The Incredibles 2.

Michael Giacchino with J.A. Bayona in 2013

So are you excited that composer Michael Giacchino will be returning to score the Jurassic World sequel? Let us know in the comments below and on our forums.

Thank you to Fede on Twitter for the heads up! 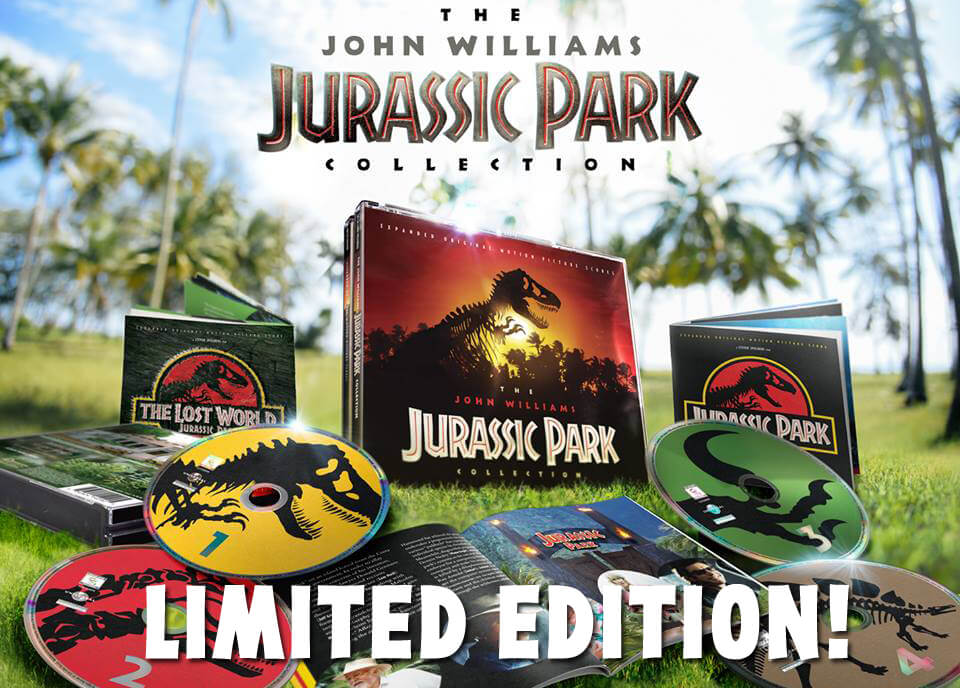 This morning La-La Land Records made an exciting announcement as they, along with Universal Studios, Universal Music Special Markets and Amblin Entertainment will be releasing The John Williams Jurassic Park Collection – Limited Edition.

The 4-CD set will contain score tracks from the the hit original 1993 film Jurassic Park and the 1997 sequel The Lost World: Jurassic Park. There will only be a limited edition amount of 5,000 units with a retail price of $59.98.

Please visit La-La Land Record’s Facebook page for a complete breakdown of all the score tracks on all four CDs.

Thanks to Derrick Davis for sending this our way!