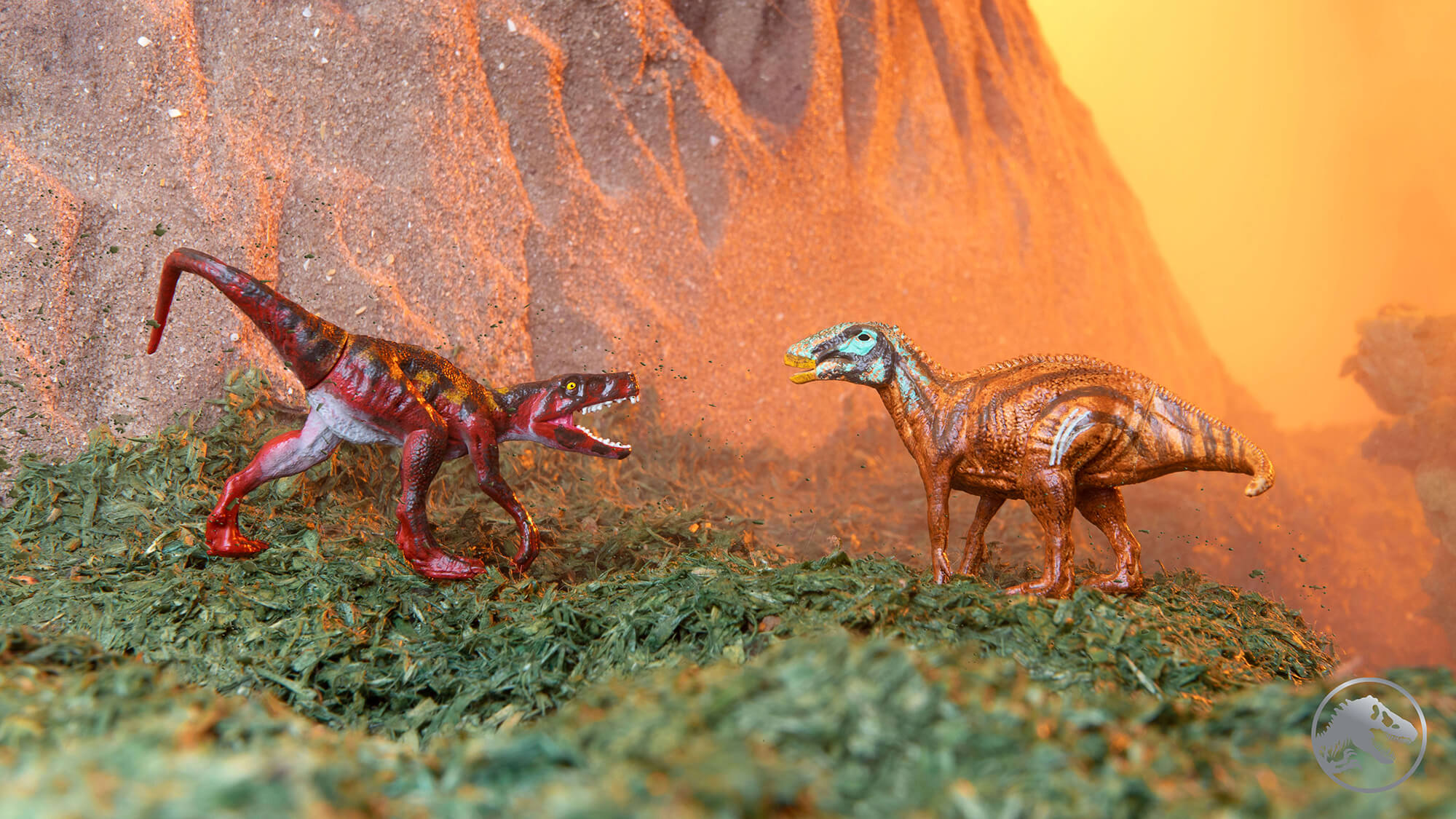 Today at TTPM Toy Monster International has unveiled the all-new Jurassic World ‘Clash Edition’ of their CAPTIVZ surprise-egg mini-figures. The Clash lineup includes over 30 dinosaurs from the Jurassic Park trilogy, Jurassic World films, and Camp Cretaceous across two waves and multiple skus, due to hit store shelves this November.

CAPTIVZ are ‘pop-n-lock’ dinosaur minifigures packaged within ‘Surprise Egg’ capsules (which retail at $5 MSRP) that include battle tokens and slime. They launched with a Fallen Kingdom lineup, and over the summer had a range dedicated to Camp Cretaceous. Each figure is roughly 3-inches long in size, and offer unparalleled accuracy, detail, and paint at their size and price.

The Clash Edition lineup will also bring some new items to the range, including the ‘MEGA EGG Surprise’! As the name suggests, the Mega Egg is a fantastic surprise egg collectors gift set which features numerous Jurassic World items inside of it and will retail at $20 USD. We’ve partnered with Toy Monster International to offer 250 Mega Eggs first, exclusively through the Jurassic Outpost store starting October 4th. Stay tuned for more details about this set, & read the full press release below!

What dinosaur are you most excited for from the Clash Edition range? Be sure to let us know, and stay tuned for all the latest Jurassic news! 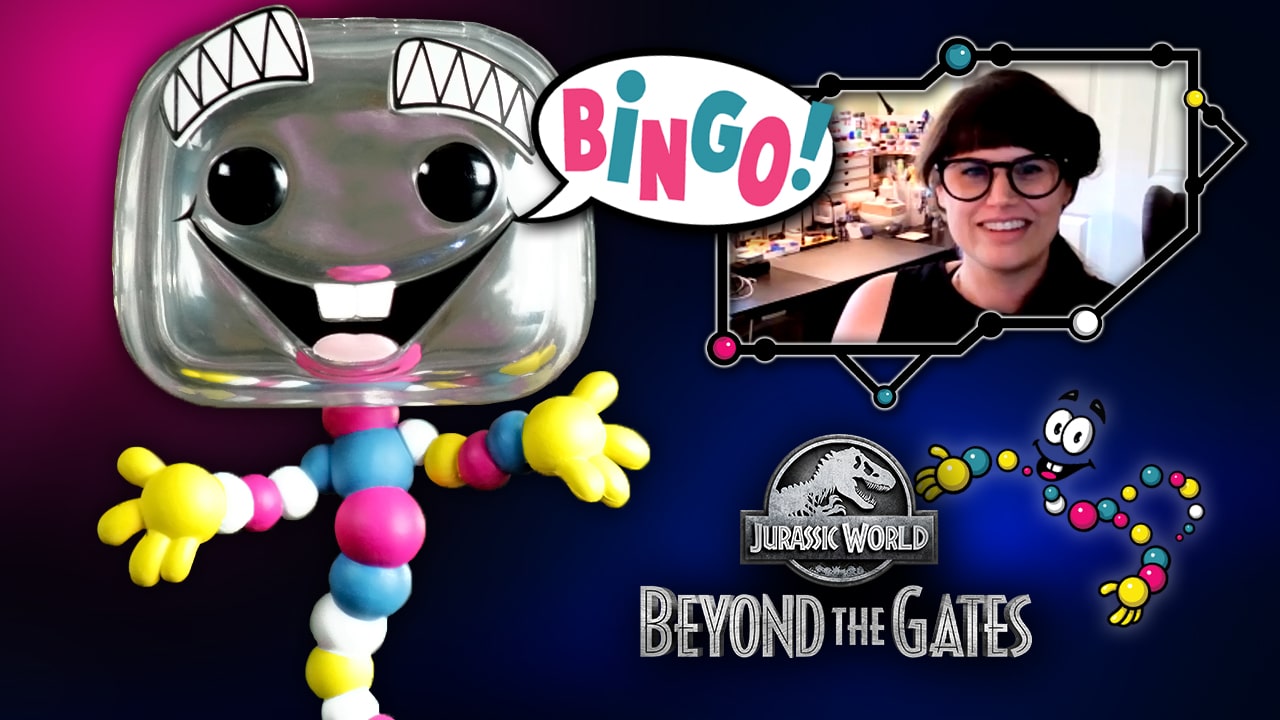 Mr. DNA, where did you come from?

The closing episode of our collectors focused web-series Beyond The Gates is here! As we mentioned last month, this show has been a blast to produce and speaking with the talented designers behind these products provides a unique look at the development, work, and passion that goes into making such collectibles.

In this final episode, we hear from 3D sculptor at Funko Katelyn Simon who takes us through the process of designing a Funko Pop! from concept to shelves!

Whether you have all of the Jurassic World Funko Pops, or just a few, Mr. DNA will sit alongside your collection perfectly, reminding you how John Hammond and his team of scientists managed the impossible.

Will you be adding Mr. DNA to your collection? You can head to Target.com now to pre-order before stock runs out!

And with the final episode now live, we really hope you have enjoyed Beyond The Gates and wanted to thank each and every one of you for watching, sharing, and commenting on the episodes.

It has meant so much to be able to produce this show, and we hope you have enjoyed learning more about the behind the scenes process that the designers take to put these Jurassic collectibles together!

Thank you, and stay tuned. 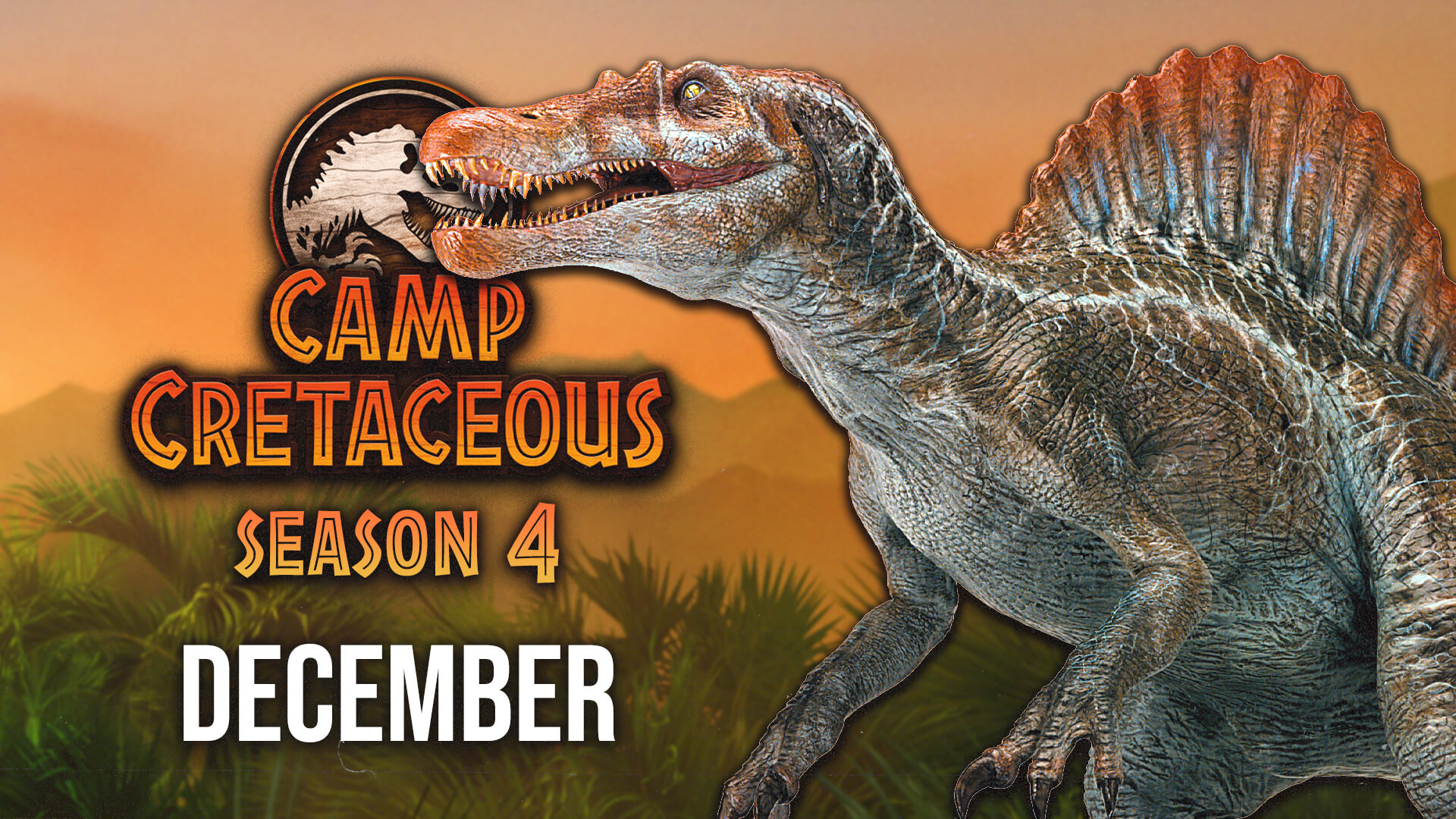 The third season of Jurassic World: Camp Cretaceous made its debut on Netflix in May of this year, continuing the story of six campers stranded on the ill-fated Isla Nublar. The season opens 6 months after the campers were left behind after the fall of Jurassic World, eventually aligning with Fallen Kingdom’s opening moments. After numerous trials and tribulations for the gregarious gang, the season closed with the kids finally sailing away from Isla Nublar…

But the number one question has been what comes next – and when?

We’ve known a 4th season is coming: Jurassic World Director Colin Trevorrow has said his favorite moments from the show will take place in it — not to mention last we saw of the campers they were unaware of something else lurking in the lower cabins of the yacht they’re now adrift upon. For our speculation on what the season will entail, I strongly suggest checking out the video below where we outline the evidence pointing to the return of Isla Sorna:

As for the release date of Camp Cretaceous Season 4, we’ve been long reporting that it would be a longer wait than normal to better align with the ‘Jurassic World Dominion’ debut. Since early this year we had been hearing Season 4 would release this December, with the fifth season dropping after Dominion in July of 2022 – and newly revealed tie-in books for the fourth season support this.

Season 4 tie-in novels ‘Camp Cretaceous, Volume Four: The Deluxe Junior Novelization‘ and ‘Rescue Mission! (Jurassic World: Camp Cretaceous)‘ have been revealed by the publisher and made available for Pre-Order, each sporting a January 4th release date.

Given the January 4th, 2022 release date for the books, we suspect the season will release December 24th or 17th, 2021. For some added context, every season of Camp Cretaceous has landed on Netflix on a Friday, and each season had multiple tie-in books that would release roughly 4 – 10 days later. If Season 4 adheres to the same schedule, December 24th is the most probable date.

We go into more detail about all of this in our YouTube video, including what the ‘Rescue Mission’ title may mean – so check it out!

When you take past marketing schedules for Camp Cretaceous into consideration, this means the first trailer will most likely hit in October. However, given the longer time between seasons we’re still hopeful to see something this month – perhaps on September 18th, the one year anniversary of the Camp Cretaceous premiere!

Are you looking forward to the fourth season of Camp Cretaceous, and what do you hope to see happen? Let us know in the comments, and stay tuned to Jurassic Outpost for the latest news!

“At Fresh Del Monte, we seek strategic brand partnerships to help encourage kids to eat more fruits and vegetables,” said Pablo Rivero, Vice President Marketing North America, Fresh Del Monte. “Therefore, we could not be more excited to partner with the Jurassic World franchise to bring these fun products and adventures to families in the United States and Canada. We look forward to getting more fruits and vegetables in kids’ hands and hope this is the first of many future partnerships with DreamWorks and Universal.”

Once you sign up for the Dinosaur Challenge, you set up your profile and start playing (no fruit purchase or scanning is necessary to play)! You play as Darius and collect fruit and other items while trying to escape a raptor that’s chasing you. Use the up and down arrows to jump, climb, and slide your way past obstacles on the island and avoid being caught by the raptor. By scanning QR codes on the produce tags, you will gain inventory items that will help you with game play, including extra lives and switching the player character.

To further sweeten the deal, consumers in the United States and Canada* can enter for a chance to win a trip to experience Universal Orlando Resort’s three amazing theme parks in Orlando, Florida. Winners will win a four-day, three-night trip with hotel, theme park tickets for winner plus three guests, and ground transportation between airport and hotel. Full terms and conditions can be found by visiting www.DinosaurChallenge.com.

Channel your inner veggiesaurus, grab some Del Monte fruit, and start playing! Who knows, you may even win a trip to Universal Studios! Let us know how far you get and your high scores in the comments! 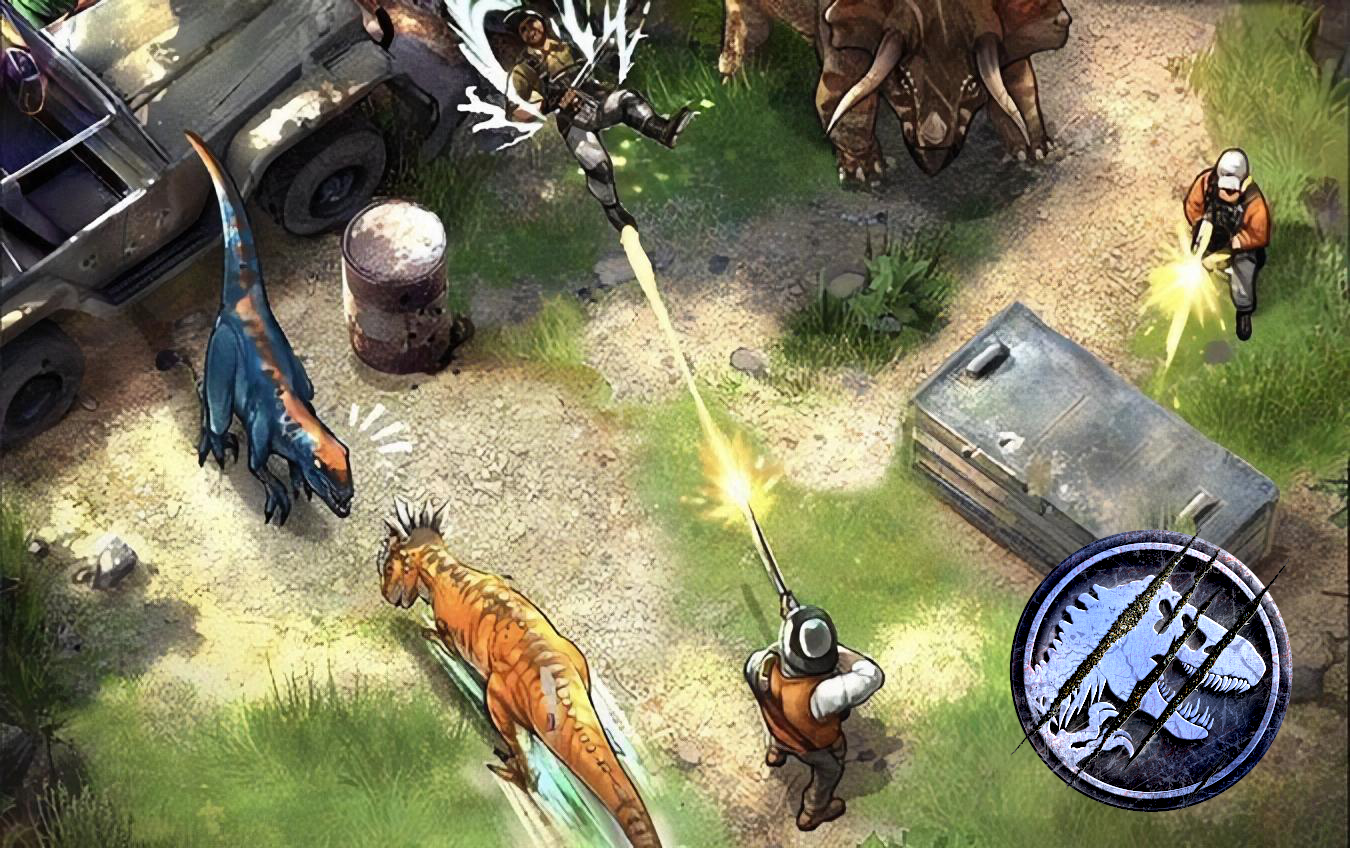 We have some great news for Jurassic fans and gamers! Universal recently filed a trademark for the name “JURASSIC WORLD PRIMAL OPS” under the Computer & Software Products & Electrical & Scientific Products category. The description provided for this trademark says:

While the description does contain verbiage regarding computers, we believe that ‘PRIMAL OPS‘ will (sadly) most likely be a new mobile ‘Jurassic’ game. However, we do hope this will be a proper larger scope and high game hitting consoles and PC, where there is a serious lack of story-driven Jurassic experiences. While properties like Star Wars continue to excel at providing diverse and quality gaming experiences, Jurassic’s approach has leaves a lot to be desired, only really delving in park building simulation games or lower budget mobile games and VR gimmick titles.

That leaves us to wonder what kind of game this will be – based on the name, we could be getting some kind of first-person dinosaur tracking/hunting game, or maybe the long awaited survival adventure similar to ‘Alien Isolation’ and ‘Jurassic World Aftermath’ (the latter of which is seeing a story expansion September 30th). Given the story post Fallen Kingdom, we could imagine this being a game where you track down and capture escaped dinosaurs across the North American countryside – which would tie in to 2022’s Jurassic World Dominion quite nicely.

It’s worth noting that over the past couple of years, Universal Games has been running ads for mockup Jurassic World mobile games (embedded above), and if you would click the link it would take you to a survey about the concept. It’s likely that Primal Ops is the proper realization of this collection of user research, which frequently were built around top-down shooters much like The Lost World game on Sega Genesis.

The game was described as the following:

Dinosaurs roam the earth. Can your team save
them all?

Dinosaurs have been released and are running
wild. It’s up to you and your team to rescue the
dinosaurs from poachers, relocate dangerous
carnivores to safety, and train your team of
human experts and dinosaur companions as you
encounter increasingly difficult situations.

– Outsmart enemies as you compete to rescue your next dinosaur

Ultimately not much is known about the game at this point, or if that mockup game and user survey were related, but be sure follow Jurassic Outpost for the latest updates!

What kind are you hoping ‘JURASSIC WORLD PRIMAL OPS’ will be? Let us know in the comments! 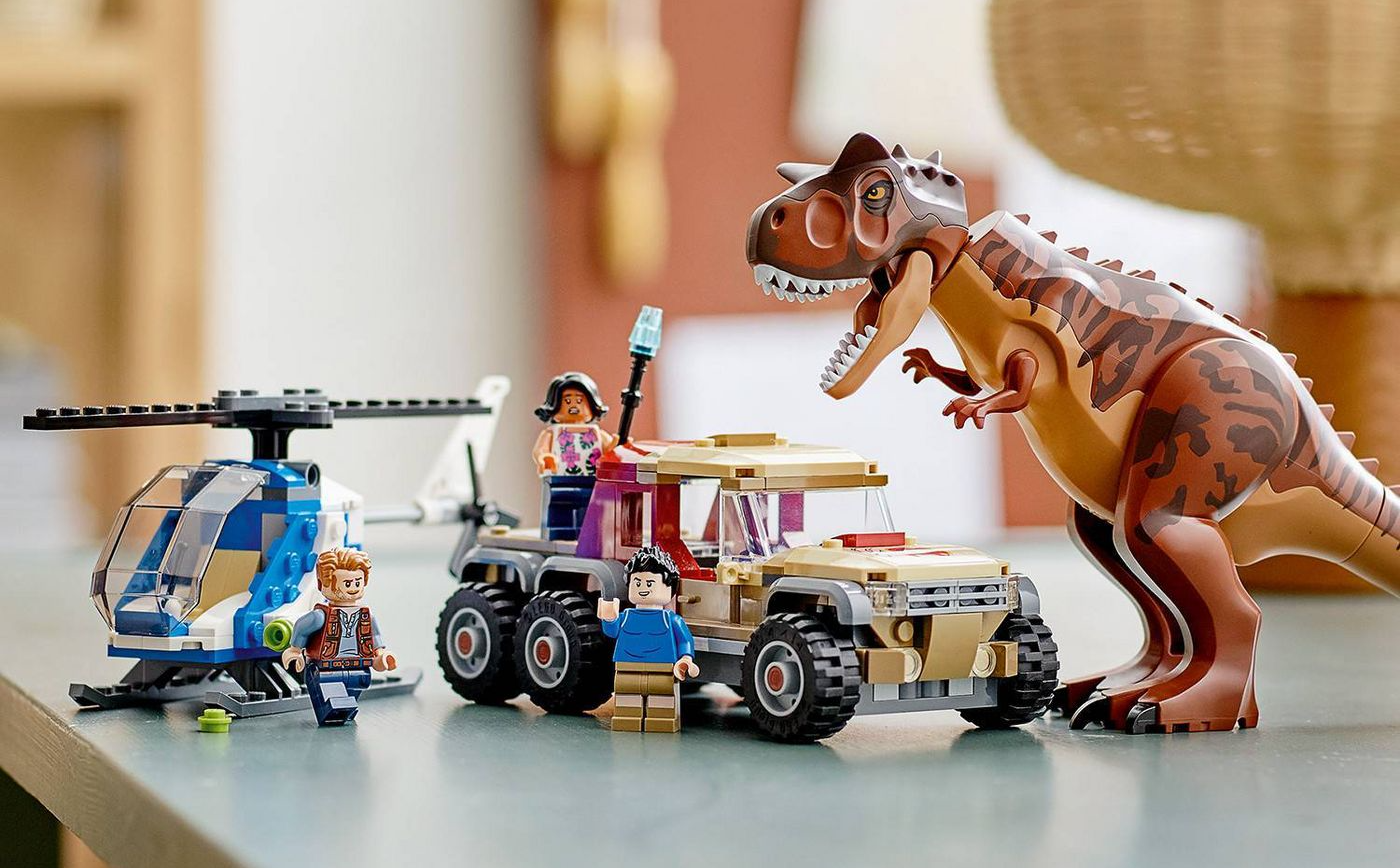 Five new Jurassic LEGO sets have been released for the world to construct and enjoy. The sets feature new moments with dinosaurs and characters from both Jurassic World and Jurassic World: Camp Cretaceous.

Next up is the Carnotaurus Dinosaur Chase set:

Next is the Stygimoloch Dinosaur Escape set:

And finally, the T. rex and Triceratops Dinosaur Breakout set:

These sets are exciting for Jurassic builders and collectors of all ages – and while they’re not based upon any specific scenes, we expect even more LEGO with Camp Cretaceous Season 4 due out in December, and Jurassic World Dominion in June 2022!

What do you think about the characters, dinosaurs, and moments showcased in these new sets? Let us know below!

All are available for purchase now on the LEGO, Amazon, and Target websites!