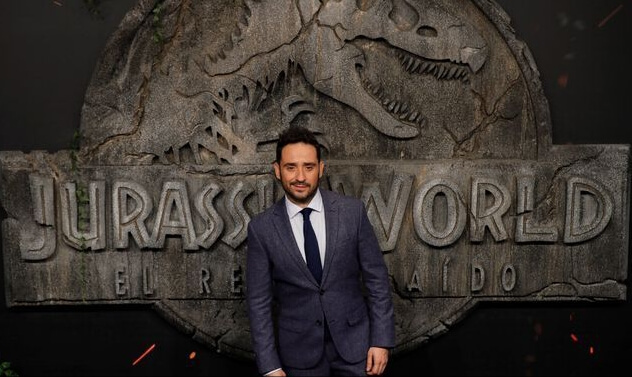 One of the biggest films of 2018, Jurassic World: Fallen Kingdom is finally being released on DVD and Blu-ray in the United Kingdom on November 5th. In anticipation of the home release, Fallen Kingdom director J.A. Bayona and writer/executive producer Colin Trevorrow spoke with The Hollywood News about the middle film in the franchise’s second trilogy and even talked about their roles on the next film tentatively being referred to as “Jurassic World 3”.

Trevorrow has been very involved with the creation of this new trilogy, and is the director on the next film, but what about Bayona’s possible role in the future of the franchise? Will he have any creative say or have an official role with Jurassic World 3? According to Bayona, it doesn’t sound like he will be involved, at least not in an official capacity. But he does leave the door open for a possible return to the franchise if there is another film. Jurassic Park 7 anyone?

J.A. Bayona – “Not really. I think it is great that Colin, who started it all, finishes the story. I would love to come back some day to the Jurassic universe but I think it is time for Colin to finish what he started.”

Though that doesn’t mean Bayona will not be consulted for the next film as Trevorrow goes on to acknowledge that he is now part of the “Jurassic” family.

Colin Trevorrow – “I am directing it but believe me I will be calling JA regularly to consult because he is part of our family now. When Steven Spielberg agreed that I wasn’t going to do the second one, he asked me if I would do the third and I promised that I would. I asked him to trust me that this choice was going to pay off and he did. He was a fan of Bayona as well. And I feel very good right now because I think that the choice did pay off. JA has directed a fantastic film. But it hasn’t changed my mind that we need to bring a strong new voice into each one of these films and for the third one I am bringing in a different writer, Emily Carmichael, who is working with me. I think doing that is something that keeps things fresh.”

Both Jurassic World and Jurassic World: Fallen Kingdom were box office monsters having grossed nearly $3 billion worldwide combined. It is a safe bet that Universal Pictures is pretty confident that Jurassic World 3 will continue that track and be another highly successful film for them. Trevorrow and newcomer Emily Carmichael are currently hard at work writing the script and targeting a shoot start date of early 2020.

Just in time for the holiday season (and let’s be honest, do we even really need a reason?), Classic Stills have released a set of high quality prints of famous Jurassic Park scenes. In total, there are eleven different stills to choose from and three options for sizes. So to answer your next question, yes, I would highly encourage you to purchase thirty-three pictures of Jurassic Park and hang them all over your home.

The available pictures depict scenes of fearsome beasts like velociraptors, T-Rex, and Dr. Ian Malcolm. You can even snag a smiling brachiosaurus!

Classic Stills is a Los Angeles and London-based publisher of rare and iconic photographs. This partnership with Universal Brand Development will be the first time stills from the movie will be available as gallery-quality art prints.

Once you pick a print, you can choose from the available 24″x30″, 16″x20″, or 11″x14″ sizes. Each picture purchased is hand-framed in black wood and comes with a certificate of authenticity. The largest size will run you $495, the second largest is $295, and the smallest is $149. But how can you even begin to put a dollar sign on dinos?

To grab one of these, you will have to be quick! These prints are only being produced in limited numbers and, as of the date of publication, some print sizes have already sold out! Hurry over to Classic Stills at the link below to sink your claws into one of these pictures before they go extinct!

Since Mattel made their debut with the Jurassic license earlier this year, they have spared no expense bringing quality items to stores, and most importantly, fans and collectors. While the Jurassic World: Fallen Kingdom tie-in line is wrapping up this Fall, the toys are not going extinct – in fact, they’re just getting started.

Take a first look at just some of the upcoming 2019 ‘Dino Rivals’ toys from Mattel, all only from the upcoming “Spring” wave (some of which are hitting shelves as early as THIS year!):

Get ready to continue the thrilling action and adventure with Jurassic World: Dino Rivals! these attack pack dinosaurs are inspired by the movie and are known to herd, hunt and attack in packs. Each attack pack dinosaur figure includes five points of articulation, realistic sculpting and authentic decoration. Choose from Velociraptor, Dracorex, Rhamphorhynchus, and many more!. Each sold separately, subject to availability. Colors and decorations may vary.

Be a part of the Jurassic World adventure with the ultimate in dinosaur rivalry and battle action! These smaller-size dinosaur action figures capture the ultimate movie action with their Savage Strike™ attack moves iconic to their respective species. Play out movie action scenes with Savage Strike™ attack moves like biting, head ramming, wing flapping and more. Just press a designated area on the dinosaur action figure to make it move (each dinosaur activation varies). Figures also include articulated arms and legs, realistic sculpting and authentic decoration. Get ready to battle it out—Savage Strike™ style—with these fierce action figures! Each sold separately, subject to availability. Each dinosaur comes with a cool Dino Rivals™ collector card detailing the dinosaur’s key battle stats and attributes. For more dinosaur fun, download the Jurassic World Facts app (Android and iOS) to scan and watch each dinosaur come to life, learn attack facts, compare stats and more!

Get ready for thrilling action and adventure with Jurassic World! These Battle Damage dinosaur action figures have a spring-loaded damage panel feature that snaps back on impact to reveal the battle wound! Kids will love battling it out again and again to see the results. Just reset the Battle Damage action figure to play out favorite action battles from the movie again and again! Choose from Battle Damage Plesiosaurus, Battle Damage Pteranodon and many more. Each sold separately, subject to availability. Colors and decorations may vary.

Get ready for thrilling action and adventure with Jurassic World: Dino Rivals!Hit the road to adventure with this Jurassic World-inspired ATV vehicle with cool features! Front of the ATV transforms into a capture claw that you can use as you drive around to capture dinosaurs. Set comes with ATV vehicle, Owen figure, knife and gauntlet accessories, Dracorex dinosaur and card with dinosaur facts for complete storytelling play!

Experience Jurassic World dinosaur battle play in a whole new way! This larger-scale Bite ‘N Fight Tyrannosaurus Rex has articulation and dual-button activation for fierce battle action! Push the back button on the Tyrannosaurus Rex and the tail strikes; press the front button and its head lunges forward with biting action and turns approximately 90 degrees. The harder you press the front button, the stronger the bite force becomes! You can also press both buttons at the same time for dual tail and head-striking action! This fan-favorite character has movie-inspired sculpting, an articulated head and tail, authentic color and realistic texture. Recreate all the epic Jurassic World battle-action scenes with this Bite ‘N Fight Tyrannosaurus Rex—but watch out—this Tyrannosaurus Rex has a huge BITE and swinging tail STRIKE! Comes with a cool Dino Rivals™ collector card detailing the dinosaur’s key battle stats and attributes.

This is just a small sampling of the items that will soon be available in stores – the entire 2019 Dino Rivals line boasts 16 entirely new species joining many new versions of previous dinosaurs. Exclusive assortments likes Battle Damage (Walmart) and Legacy Collection (Target) are continuing to expand, and should provide many fun surprises in the future.

Some of the upcoming toys not pictured here, but revealed at San Diego Comic Con 2018 are the Colossal Brachiosaurus, Mega Dual Attack Amargasaurus, and Franklin Webb human action figure. Be sure to keep your eyes open, as more pictures of the Dino Rivals toys are likely around the corner!

While the other items have yet to become available, the Attack Pack’s are already available to order on Amazon (with many more pictures): Dracorex, Rhamphorhynchus, Coelurus, Protoceratops, Velociraptor, and Herrerasaurus.

What are your thoughts on the revealed items, and what else do you hope the new line of toys bring? Sound off in the comments below, and as always, stay tuned for the latest news! 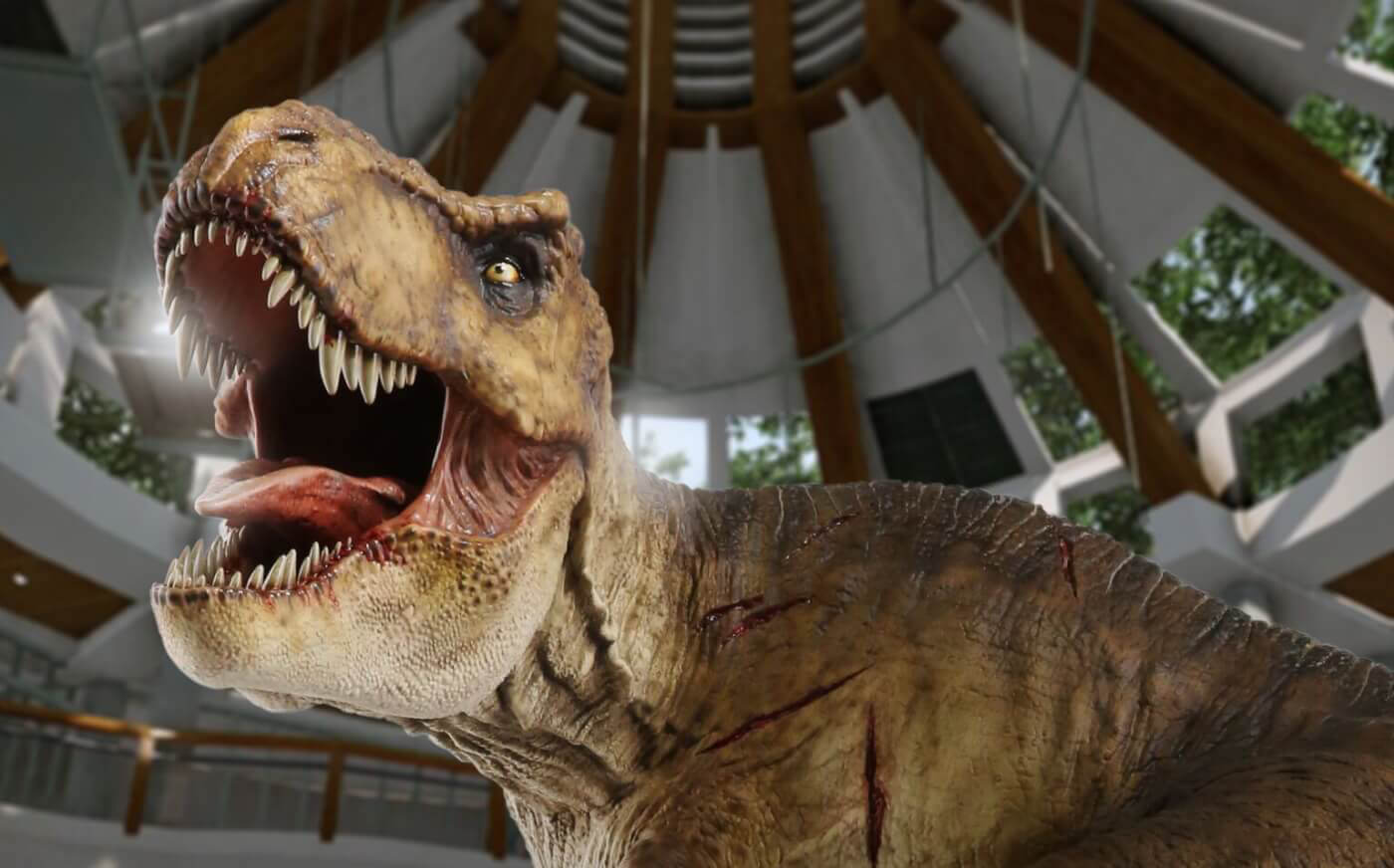 Two iconic scenes from ‘Jurassic Park’ can now be yours to own!

Chronicle Collectibles has revealed two new statues at New York Comic Con! The first limited edition statue features the ‘Rotunda Rex’ in her “When Dinosaurs Ruled the Earth” pose from the end of ‘Jurassic Park’. It’s in 1:9 scale, which means it’s approximately 24″ tall by 22″ in diameter! If you are a collector of the other Jurassic statues, it’s good to note that this one is in the same scale as Chronicle’s Owen & Blue statue.

The statue features the T.Rex in a roaring pose, the falling “When Dinosaurs Rule the Earth” banner, and dinosaur bones that fell from the ceiling of rotunda. Dinosaur fossils surround the entire outside edge of the base. There’s a great amount of detail in every part of this statue, especially the T.Rex, who even has the battle wounds from the velociraptors!

For all the fans of Dr. Ian Malcolm and the “sexy Malcolm” pose, the second statue is for you! The statue features the injured Dr. Ian Malcolm in his reclined, shirt unbuttoned pose. It’s in 1:4 scale, which makes it approximately 10″ tall by 18″ in diameter. The base features a similar fossil pattern as the ‘Rotunda Rex’ statue, with fossil details all around the outside of the base.

Are you planning on adding one of these to your collection? Let us know in the comments! 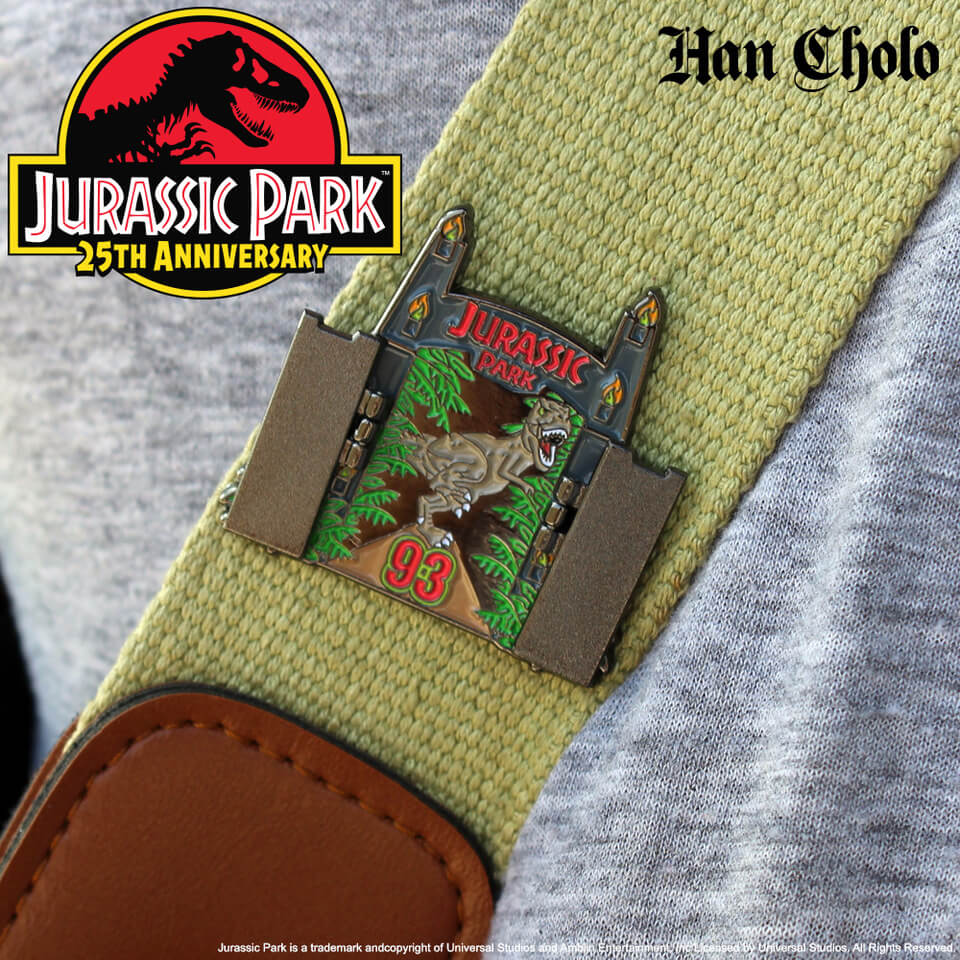 Headed to New York Comic Con this weekend and need a dinosaur fix? Los Angeles based jewelry company, Han Cholo will be there with new ‘Jurassic Park’ items!

“The fans asked and Han Cholo has delivered. Since the release of the Officially Licensed Jurassic Park micro collection, there has been a spike in the demand for new Jurassic Park jewelry as well as the most sought after enamel pin, the Jurassic Park Gate pin. The gate was made as an exclusive release for SDCC 2018, but after such a high demand for it Han Cholo decided to re-release it in a different color variant and this pin is here to stay! It is releasing at NYCC 2018 this year and is up for pre-orders right now on their website. This pin features the T-Rex in her on screen color way with the tan grey skin as well as the awesome moving gate doors. Also releasing this month at New York Comic Con will be the T-rex Pendant. This scaled down version of the T-Rex pendant has all the detail of the King of the Dinosaurs. If you’re in the New York area be sure to stop by Booth #241 to check out what Han Cholo has to offer!”

Did you pick up any of the already released JP25 items? If so, what did you think? Sound off in the comments below!