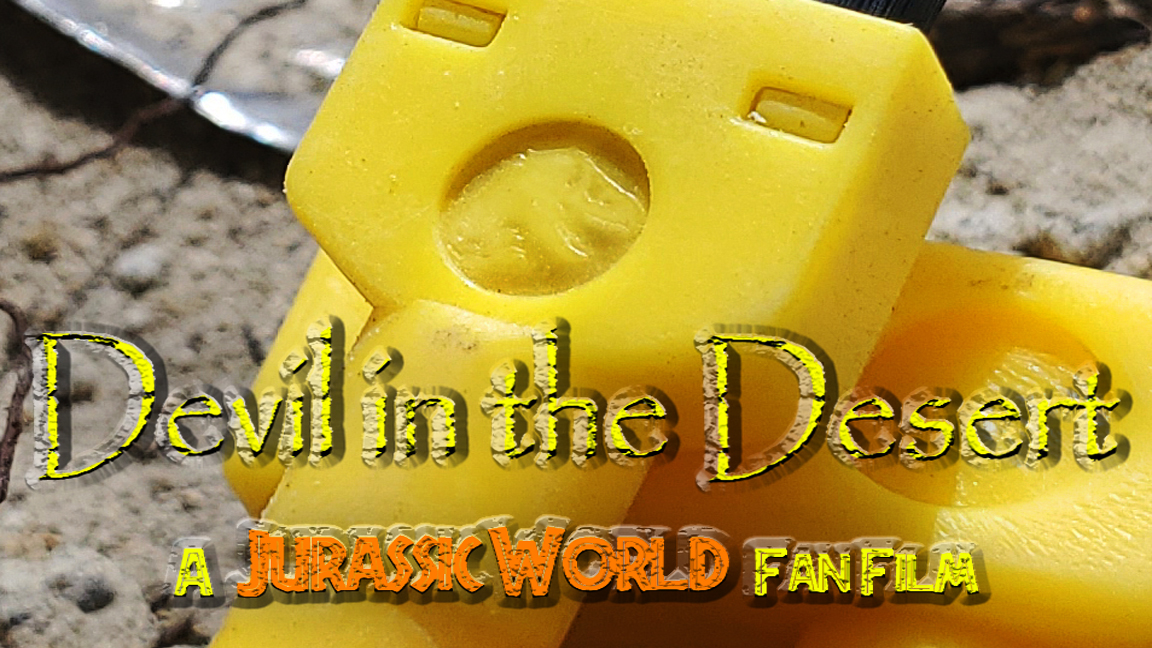 ‘Jurassic World: Dominion’ still hasn’t unveiled a trailer, ‘Camp Cretaceous’ is behind us for now, and apart from some advertisements associated with the Olympics; not much is happening. This will all change very soon, but in the meantime wouldn’t it be nice to watch a short film connected to the story of the movies? No, I don’t mean the fantastic ‘Battle At Big Rock’ from years ago (although you should definitely check that out if you somehow haven’t). Fans have created their own films! One of these fans, Joshua Malone, an aspiring actor and filmmaker, has recently unleashed a brand-new film: ‘Devil In The Desert’!

Created in association with the Colorado Northwestern Community College and their paleontology program, ‘Devil In The Desert’ is a found footage-style production that takes place after the events of ‘Jurassic World: Fallen Kingdom’. Filmed on location at a real dig site in Colorado, follow a group of paleontologists as they go about their daily work… until “the devil” slowly begins to reveal itself. Could a dinosaur from Lockwood Manor’s grand escape have made its way to them? If so, who better to handle a dinosaur than a group of dinosaur experts? Or is real-life much more dangerous than its buried ancestors could have foretold?

When asked about what it was like to direct and work with actual paleontologists on the film, Josh said:

“It was interesting because some of us had some previous experience and some didn’t, but everyone was really on board with this. We didn’t have a script, at all. It was just us constantly brainstorming and coming up with scenes on the spot while we were taking breaks or after dinners. Everyone out there loved dinosaurs and enjoys ‘Jurassic’ so we all just were like, “How would we handle running into a Lockwood dinosaur?”, and it went from there. The dig site itself is incredible, and the field program Colorado Northwestern Community College offers is truly unique and an amazing experience.”

‘Devil In The Desert’ is a fun and creepy little film that is sure to delight ‘Jurassic’ fans! Joshua Malone’s recent additional works include Haunted: A Halloween Horror Nights Fan-Film and several voice roles in Rick Carter’s Jurassic Park: An Illustrated Audio Drama.

What other ‘Jurassic’-related fan films have you seen that you love? Share your thoughts in the comments below, and always stay tuned to Jurassic Outpost for the latest! 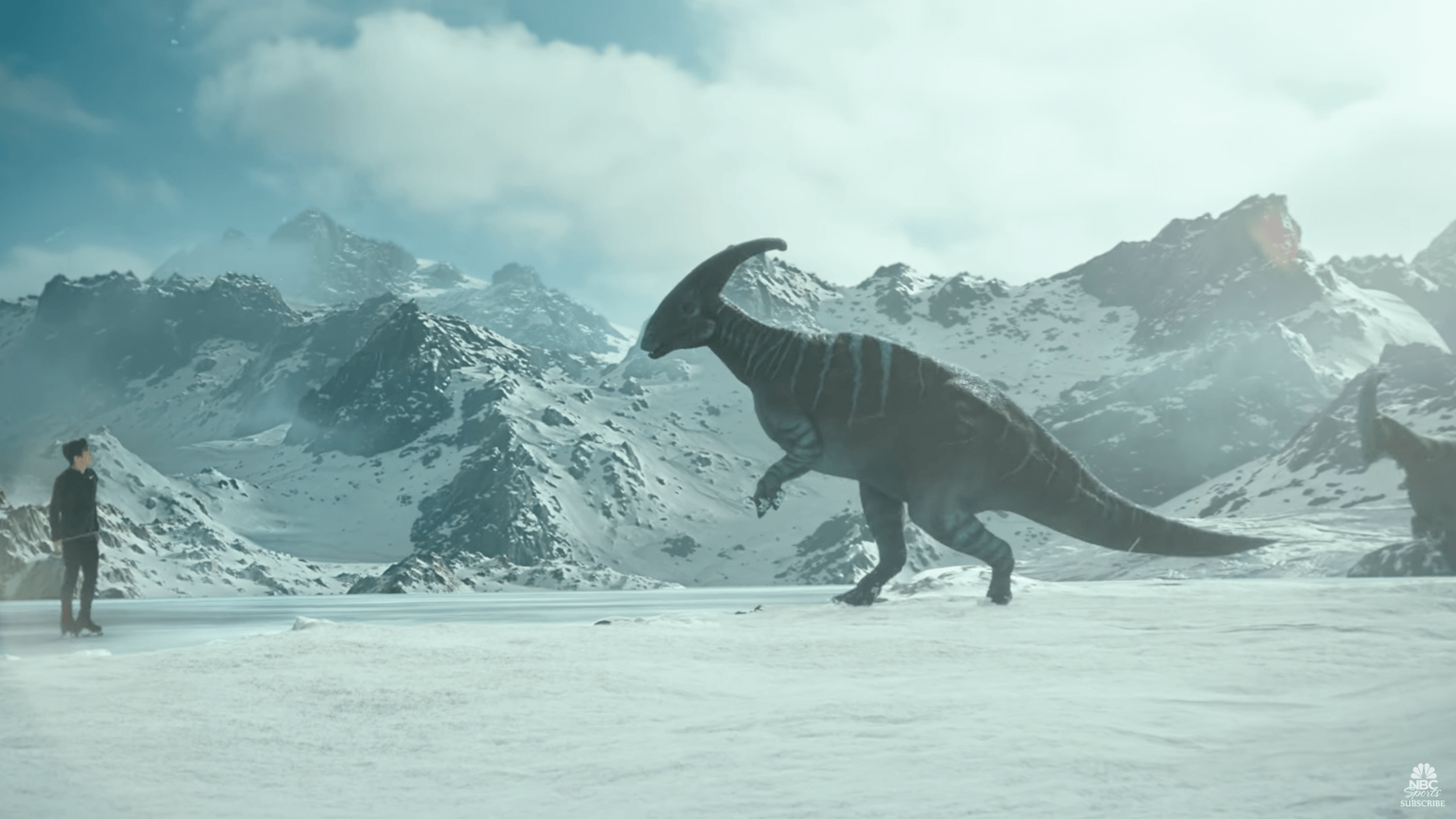 “They do move in herds.“

The ad begins as Chen trains for the upcoming Winter Olympics on a frozen lake, high in a snow-covered mountain range. A herd of parasaurolophus stampede through a ravine towards him as Jurassic inspired music begins. It crescendos as the group stops along the bank of the frozen lake, creating a moment of awe before the magnificent creatures. The leader of the herd and Chen lock eyes for a moment before the group bolts away into the snowy distance. The ad ends with a promo card for the Winter Olympics beginning February 3rd on NBC and ‘Jurassic World: Dominion’ in theaters June 10th.

This second entry in the ‘Jurassic World: Dominion’ x NBC Winter Olympics crossover ad campaign really ups the concept of the first a bit and brings in some beautiful music and dinosaurs to boot. Who knows what the next ad and the culmination of this campaign will bring! What do you think of these ads? Let us know in the comments below and stay tuned to Jurassic Outpost for the latest news! 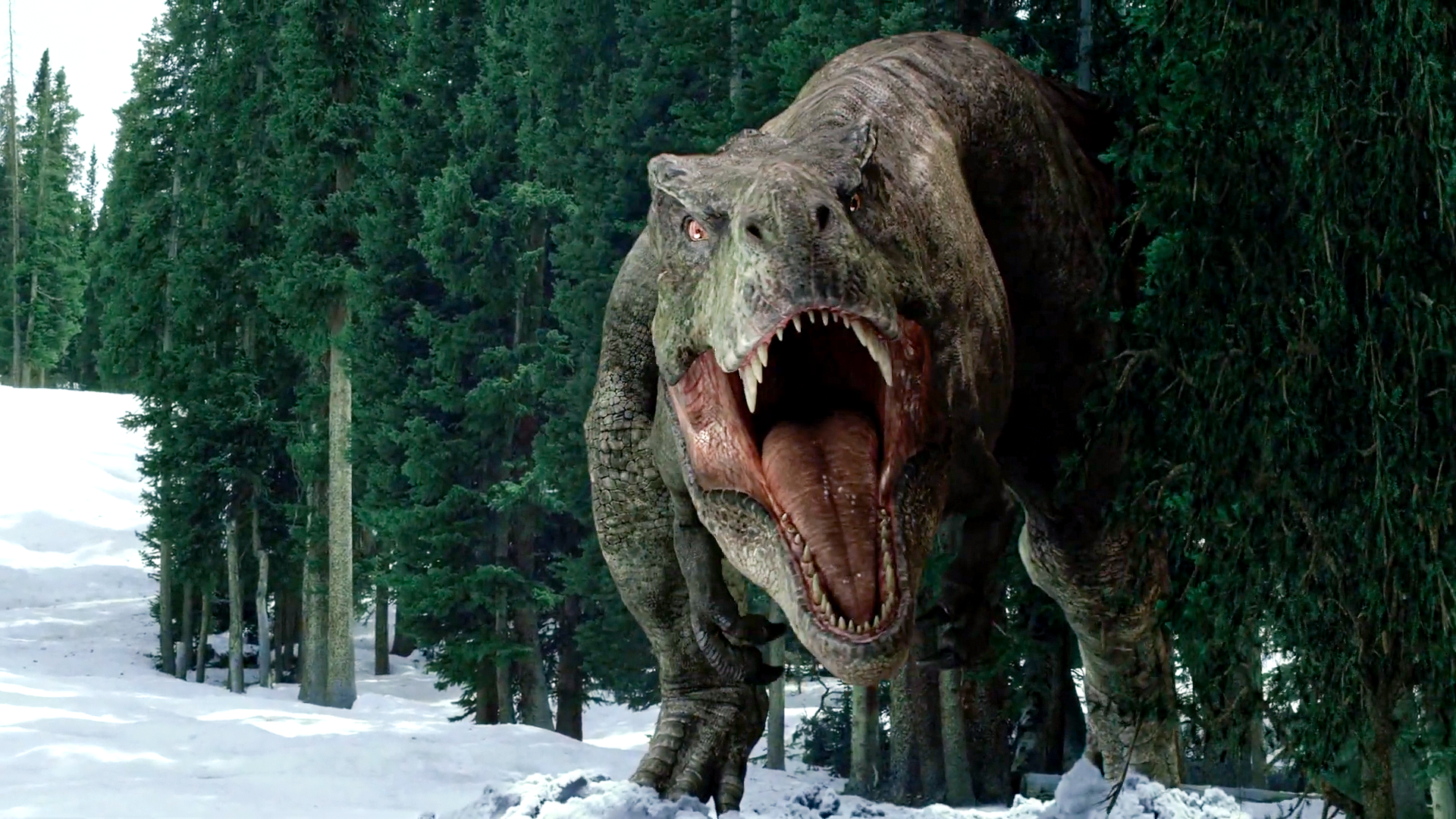 After what feels like 65 million years, the Jurassic World Dominion marketing campaign has officially kicked off in full swing. First making its debut on the TODAY Show, a new advert has roared its way online featuring Velociraptor Blue and a Tyrannosaurus rex alongside Alpine skier Mikaela Shiffrin.

Check it out here:

According to the NBCUniversal Press release ‘Shiffrin is one of three Team USA athletes who will appear in ads merging Winter Olympics competitors and the upcoming film, Jurassic World: Dominion. Snowboarder Shaun White and figure skater Nathan Chen will also each encounter dinosaurs created by the artists at Industrial Light & Magic.’

Per the NBC Universal press release, this campaign will continue throughout the Olympics with the other key dates being January 31st plus February 3rd & 4th:

According to the NBC Universal media event we reported on yesterday, this is all leading to a larger payoff that will occur during Super Bowl LVI on February 13th. While these unique Olympics adverts do not actually include footage from the film itself, it is expected to lead into more traditional film adverts during the NFLs ‘Big Game’ on February 13th.

Are you excited to finally see the Jurassic World Dominion marketing kickoff? Let us know in the comments below and stay tuned for all the latest news! 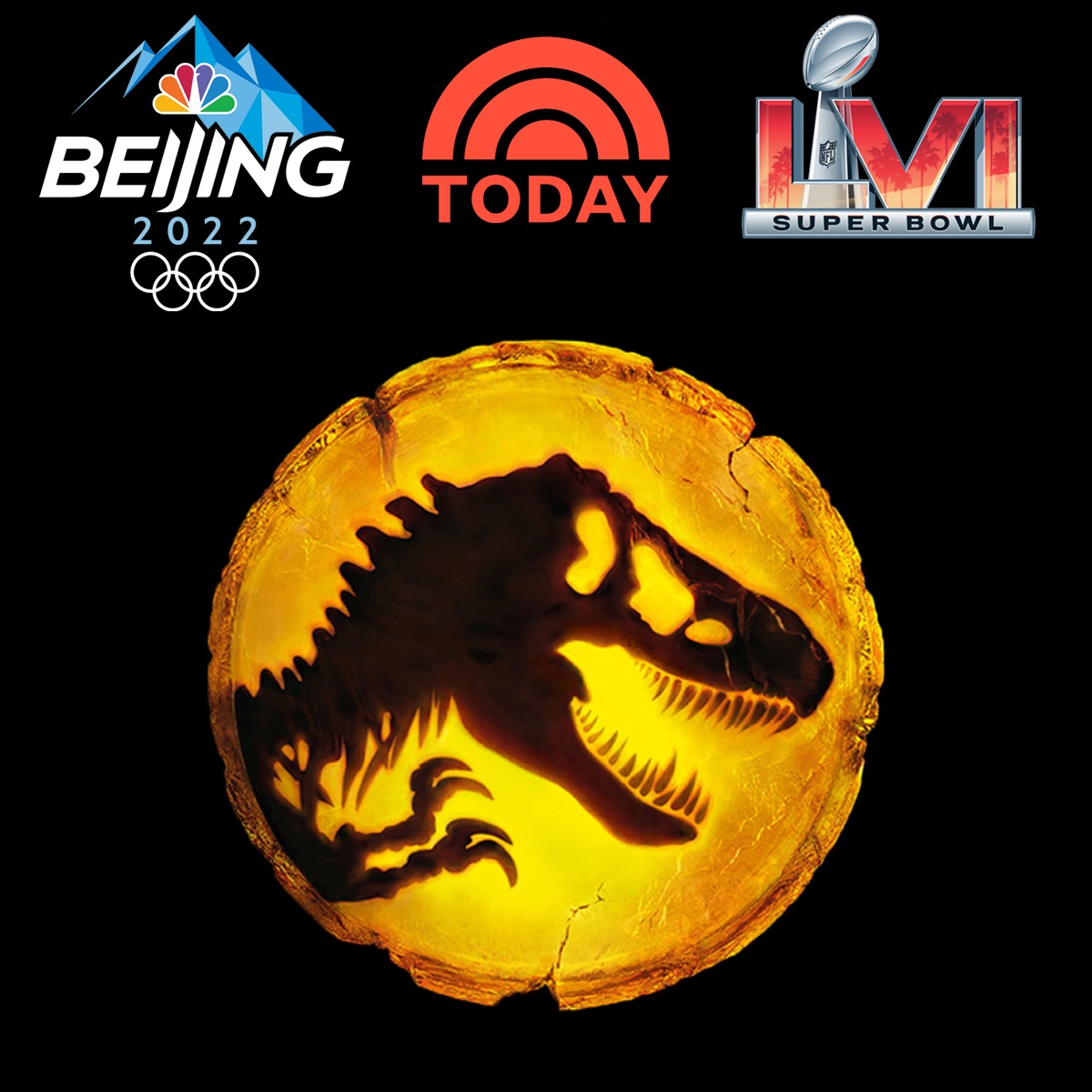 NBCUniversal has just announced via press release their marketing plans for the upcoming Winter Olympics and Super Bowl XLVI, and within those plans is some big Jurassic World: Dominion news!

From the initial press preview:

Speaking further in the press release, representatives from NBCU shared:

This is exciting news as it seems the marketing campaign for Jurassic World: Dominion is hatching tomorrow! To set expectations: this is not the trailer, but the beginning of a marketing campaign that could culminate with it. In a recent media event, NBCUniversal promised an even larger pay off for the Dominion marketing during the Super Bowl on February 13th:

Be sure and tune in to the TODAY Show tomorrow morning – January 21st, Jurassic fans — and hold on to your butts, because there is lots more to come! Stay tuned. 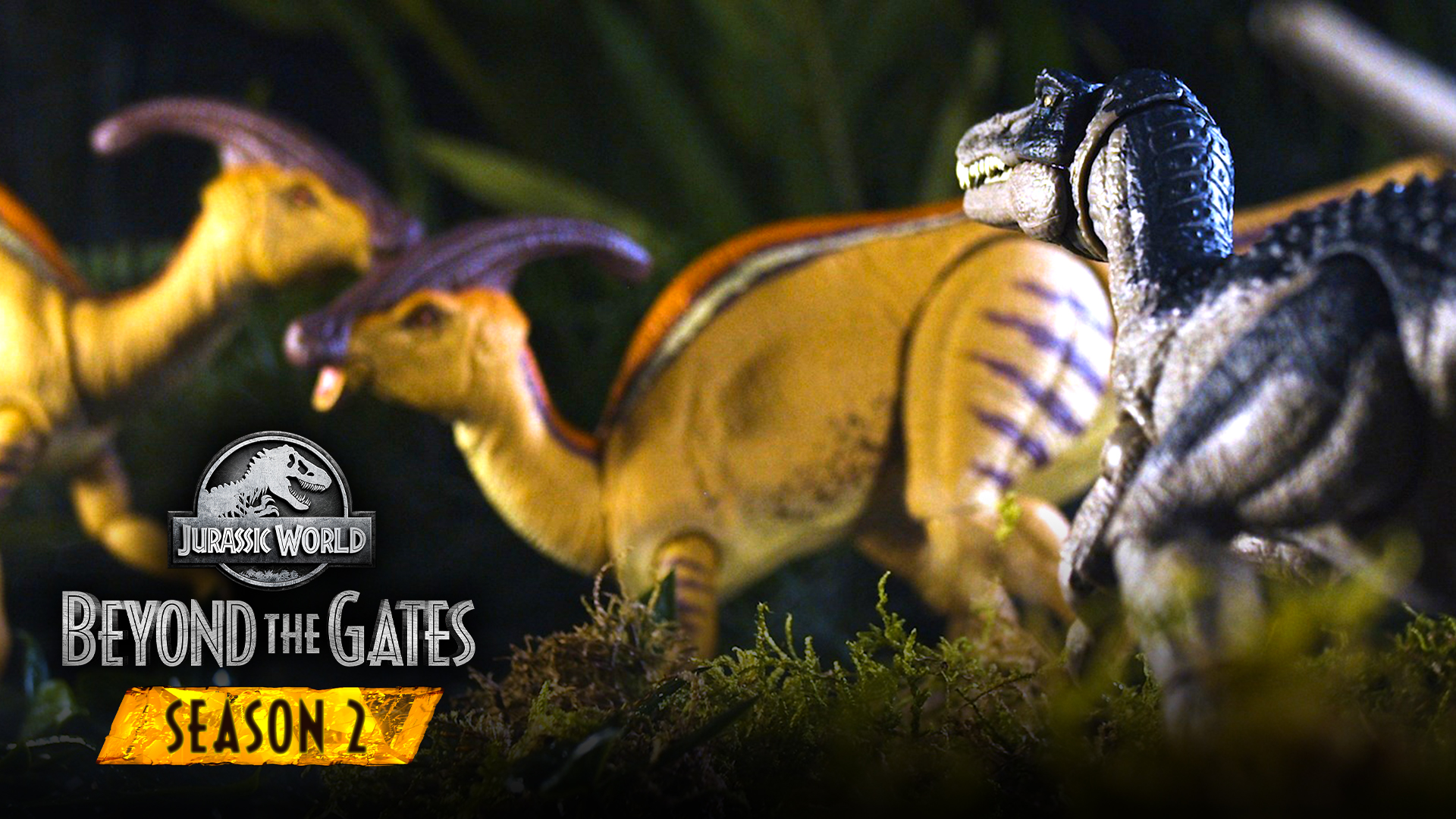 The gates are BACK open with another season of our collector-focused show Beyond The Gates!

We’ve once again partnered up with the fantastic teams at Universal, Target, and Mattel to produce this fun, Jurassic reveal show from the fans – for the fans! Check out the debut episode below:

In episode 1 we speak with Mattel’s toy designer Gregory Murphy about the brand new collector focused line: the Hammond Collection, and dive into the designing and painting of the two debut items: The Lost World’s Parasaurolophus, and Fallen Kingdom’s Baryonyx.

The Hammond Collection named for Jurassic Park’s founder John Parker Hammond and sets a new standard for Jurassic collectables, marrying the detail you knew from the Amber Collection with the core 3.75″ scale. This means more dinosaurs than ever of all sizes from across the entire franchise.

Discover the thrills and adventure of the Jurassic World Series captured in the Hammond Collection, named for Jurassic Park’s founder John Parker Hammond and setting a new standard for dinosaur collectables, including the fearsome Baryonyx! With premium design and attention to detail, this 13 inch long Baryonyx from Jurassic World: Fallen Kingdom has incredible movie-accurate design, color and texture, and 20 points of articulation, from a terrifying wide double-articulated jaw to a posable tail and 3 joints on the back legs.

With premium design that is movie-quality in detail, this 12 inch long Parasaurolophus action figure from The Lost World: Jurassic Park will delight fans and collectors. This figure has incredible movie-accurate design, color and texture, and about 14 points of articulation, including an articulated mouth, tail and multiple joints on the back legs.

Watch the debut episode of season 2 now and pre-order these amazing toys directly at Target.com!

We’re so excited to bring another season of exclusive reveals to the Jurassic fandom! Beyond The Gates will continue with monthly episode and will feature more items from the Hammond Collection, the Legacy Collection and of course, the upcoming Jurassic World: Dominion.

The next episode launches February 16th with an exclusive Legacy Collection set you won’t want to miss! Stay tuned.

About Jurassic World:
From Universal Pictures and Amblin Entertainment, Jurassic World immerses audiences of all ages in a new era of wonder and thrills where dinosaurs and humankind must learn to coexist. Jurassic World is set against a global backdrop of diverse locations, with a sprawling story grounded in believable science and populated by distinctive dinosaurs, heroic humans, and cunning villains at both ends of the evolutionary spectrum.

About Beyond The Gates:
Created in partnership with Universal Pictures, Amblin Entertainment, Target, and Mattel, Beyond The Gates is produced by Outpost Creative, LLC which was founded by Chris Pugh and Jack De La Mare in late 2020. This show represents a unique partnership between many parties which has allowed for a true Jurassic Park passion project made for the fans, by the fans. 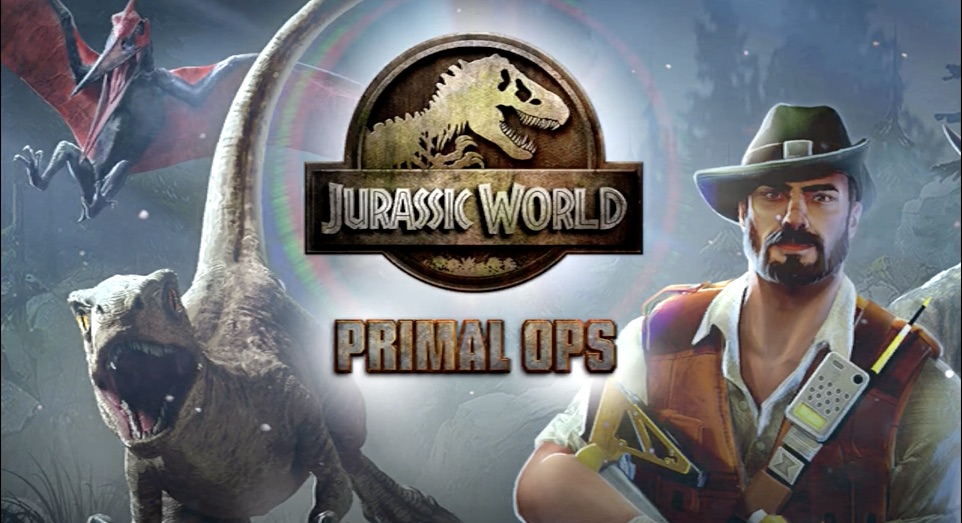 The Jurassic World: Dominion game ‘Primal Ops’ has just been released in a limited fashion for iOS! The game features real-time Jurassic World action-combat gameplay, strategic dinosaur companions, challenging missions, dinosaur rescues, and a “create your own” play style with epic power-ups hidden in each mission. Read our previous coverage of this game here.

Watch the first gameplay trailer below:

‘Primal Ops’ contains some fun gameplay options and missions, which are detailed in the App Store description:

The action-adventure mobile game of the Jurassic World universe.

Jurassic World Primal Ops is a thrilling top-down action-adventure game where only you can save the dinosaurs from another extinction. As an elite battle-trained dinosaur handler, your mission is to travel across North America, rescuing dinosaurs from malicious mercenaries, formidable poachers, and sinister scientists.

Luckily, you’re not alone. The dinosaurs you rescue from your Dinosaur Collection are companions capable of turning the tide in any battle. Each dinosaur added to your roster can be called on to fight by your side, using their unique abilities to powerful effect. Build lasting bonds with your favorite dinosaurs and overcome any challenge standing in your way.

Life as we know it has changed. Dinosaurs freely roam the Earth once again. Expand on the story of Jurassic World with a thrilling new narrative adventure featuring an expansive cast of allies, foes, and a huge primal world to discover.

Dinosaurs are no longer extinct, but many stand determined to keep them endangered. It’s up to you to infiltrate enemy camps, gain intel, and rescue wild, captured, or wounded dinosaurs from three villainous factions.

Every rescued dinosaur will be added to your Dinosaur Collection and made available as an ally. There are dozens of dinosaurs to collect, each with unique abilities to aid you on your mission.

Nothing levels a playing field like a T.rex. From trampling Triceratops to supply-dropping Pteranodons, use the unique abilities of your dinosaur companions to overcome challenges in combat, with each one bringing a new dynamic to the battlefield.

Explore North America seeking out dinosaur eggs, DNA strands, and the many secrets hidden throughout its landscapes. Use these collectibles to level up and strengthen your dinosaur companions, furthering your bond and unlocking new abilities. Jurassic World Primal Ops is available in English.

While this mobile game is currently a soft release, only available in a few countries, and interestingly without an official announcement or website, it’s exciting that it’s making its way into the world.

What do you think about this game, and will you be playing? Let us know in the comments and stay tuned to Jurassic Outpost for the latest news!