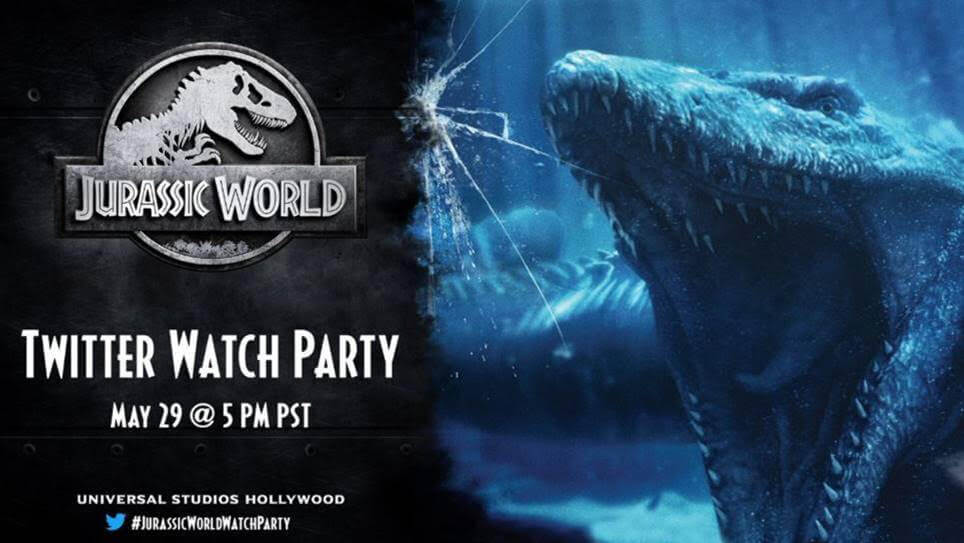 Universal Studios Hollywood have announced a fun opportunity for fans to join in on an exciting screening of the 2015 hit Jurassic World  – with a watch party taking place through the studio’s Twitter Account.

The watch along is taking place as part of a wider initiative which Universal Studios are undertaking to entertain fans of the parks whilst they are stuck at home. This initiative is known as #UniversalAtHome, and has been designed to bring fans together during this difficult period.

However, that isn’t all – as the Press Release from the Universal Studios team highlights an exciting addition to this watch along event:

This is a fun opportunity for fans of all ages to come together and share in a great watch along. We’ve also seen other outlets within the Jurassic community host similar fantastic watch-along experiences for fans, so it is great to see so many people enjoying these films during this lockdown period.

Will you be joining in on the watch-along this Friday, or have you taken part in any other fun watch-alongs during the lockdown period? Are you a fan of the cocktails from Isla Nu-Bar?

Let us know in the comments below, and stay tuned for the latest news on Jurassic World Dominion and all future Jurassic projects! 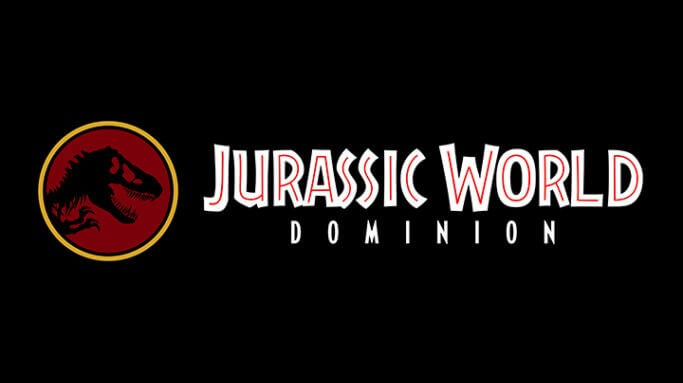 The production for the sixth Jurassic film, Jurassic World: Dominion has been suspended since March 14th due to the global COVID-19 pandemic, but could there finally be a light at the end of the tunnel?

In an interview with Jurassic Park, Jurassic Park III and Jurassic World: Dominion actor Sam Neill, The Guardian reports that the “hope” is that filming can resume this upcoming July.

The actor and his latest team of Jurassic co-stars were due to start filming in England on Jurassic World III this month, until the pandemic struck, but he said there is still hope that some work can resume in July.

It should be noted that while they’re targeting a July start date, the entire situation remains fluid and unique – meaning further delays may occur to better protect the health and safety of cast and crew, and to fully realize the original vision of the film.

The film still holds it’s June 11, 2021 release date but it remains to be seen if that date will stick. It is likely a short pause of filming could have been handled, but a July re-start will be almost a four month delay. Though it should be noted that Universal Pictures has staked out claim for June 10, 2022 for an “Untitled Universal Event Film”, which very well may be the latest Jurassic Park films new home.

What are your thoughts on filming possibly resuming for Jurassic World: Dominion in July? Do you think that is too soon, or could it even be earlier?Let us know your thoughts in the comments below.

In perhaps one of the least surprising, but still reassuring to hear confirmations yet, ‘Jurassic World: Dominion’ will not mark the end of the Jurassic Park saga. While speaking to Collider, producer Frank Marshall had the following to say about Dominion’s place in the story as a whole:

“No [it’s not the conclusion of the franchise]. It’s the start of a new era. The dinosaurs are now on the mainland amongst us, and they will be for quite some time, I hope.”

This isn’t all that surprising, given the end of ‘Jurassic World: Fallen Kingdom’ and the overall commercial success of the franchise. The dinosaurs are free within the world, and as Eli Mills said: you can’t put it back in the box. The possibilities are limitless now, and with things like a live action series in development at Amblin TV plus director Colin Trevorrow alluding to more films after JW3 in the past, the writing was on the wall.

We’re excited to see where the future of the franchise brings us, especially with possibilities of new writers and directors bringing their own unique styles and ideas to story as it further evolves. Until then, we have ‘Jurassic World: Dominion’, which is expected to resume filming in London shortly after all the proper COVID19 safety protocols are put into place, and schedules are realigned. While ‘Dominion’ may not be the end, we expect it to wrap up the stories of Alan Grant, Ellie Sattler, Ian Malcolm, Claire Dearing, and Owen Grady – the final chaotic turning point of events set into motion after John Hammond brought his dream into reality with Jurassic Park. As for who will lead the future films, we fully expect entirely new faces and stories, but occasional cameos aren’t out of the question.

What do you want to see from the future of Jurassic Park, and what writers or directors would you like to see lead the story forward? Let us know your thoughts in the comments below! 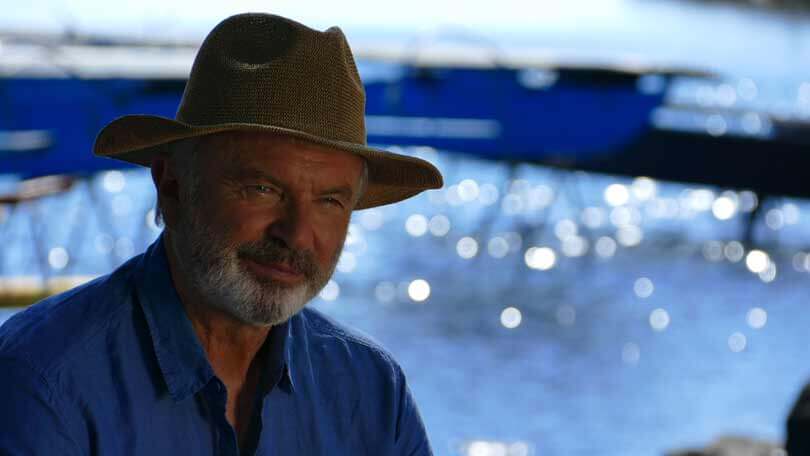 Legendary actor Sam Neill, who will be returning as famous paleontologist Alan Grant in Jurassic World Dominion, has floated the idea of moving production to Australia or New Zealand to get things back up and running sooner. In an interview with an Australian radio show (Fitzy and Wippa on Nova), Neill revealed Dominion had finished two weeks of shooting before the coronavirus pandemic halted filming. As he put it, the cast and crew are “in the fridge now” waiting for production to resume.

Neill said he was supposed to be filming his parts for the movie in London, firstly at Pinewood Studios, but flew home to New Zealand as soon as things started shutting down. Not wanting to stay down for long, he remarked, “I’d like to think that maybe we can start or restart in this part of the world.” With the tenuous situation in the UK at the moment, Neill “reckons New Zealand or Australia would be the place to bring it” so filming could start back up sooner.

A move down under for Jurassic World Dominion would shake up production quite a bit for the movie. I think one thing is clear, Jurassic World Dominion should not be rushed. Fans want a good movie, not one that rushes to theaters as quickly as possible. Especially in a time where movies have been delayed for months, a move like that from Universal would simply come off as a cheap cash grab ploy.

Dominion was shut-down mid production, halting the sculpting and designing of dinosaurs, creations of animatronics, and creation of complex props and sets. Dominion was shaping up to feature the most animatronic dinosaurs, both large and small, since the original Jurassic Park films, innovating much like the modern Star Wars films. However, should the production move shops, and the release date be adhered to, these will inevitably be sacrificed to save time and money. This extends to more than animatronics, but the entire artistic vision of the film, putting undue strain on Colin Trevorrow and the actors to speed through the production, and it to be more VFX dependent with far less time.

The other issue is simply one of safety. We know that when movie productions start back up, there’s going to be a lot of safety regulations put into place. We have already seen some of the restrictions the UK is planning on using, and they are STRICT. To the point of having actors six feet apart during scenes, with something as simple as a kiss requiring VFX. These restrictions expand to the crew, meaning things must move far slower, with fewer people, and costing more money. Obviously for a franchise with as much ‘chaos’ as Jurassic, requiring intense filming scenes on both sides of the camera, that probably just will not work. Of course we want this movie to be made, but not so much to the point as we are sacrificing the health and well-being of those working on it – nor the artistic vision of the movie itself. It would be much better to resume work on Dominion once we are cleared to go about business as usual, and of course, with a delayed release date.

Waiting to resume back in London has its benefits too. With all this time Colin and crew have time on their hands to think about the story they are telling and how to make it even better. Scripts constantly change in this business, and sometimes for the better – time is not going to hurt this production, but rushing will. Not to mention that if production is moved to Australia, countless employees who expected to have steady work with Dominion will be out of a job (“Don’t you mean extinct?”). It would not be fair to the people livelihood that depending on this large production, and would only disrupt or perhaps throwaway the hardwork they already put into the films development.

Of course, there may be ways to pick up some side work in Australia and New Zealand, paving the way for a full throttle return to London – but a this point it’s hard to see its longterm benefits, at least without a formal delay and proper plan.

All in all, it’s a better idea just to let things sit for the moment. Give the production some time to breathe as the pandemic subsides – it will benefit so many people in the long run. I know we are all chomping at the bit to see this star-studded Jurassic conclusion, but let’s just remember that this virus requires are absence to die out, not our presence. And if we could only step aside, and trust in nature (plus our health care professionals), Dominion will find a way.

Any thoughts on how COVID19 is affecting movie production? Do you think moving to Australia or New Zealand would actually be a good move for Dominion? Let us know in the comments below! 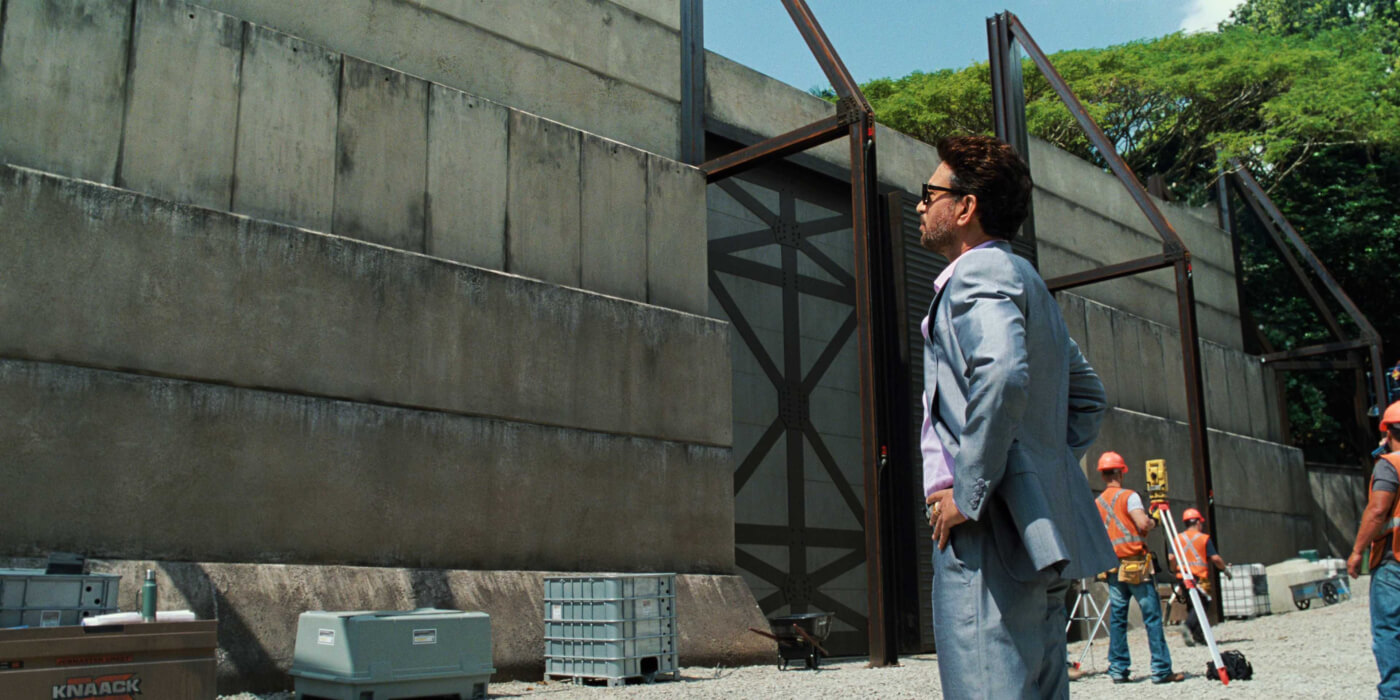 Many Jurassic fans and cinephiles alike woke up Wednesday with the sad news that prolific film actor Irrfan Khan had passed away.  It’s always hard when someone beloved leaves this world, and it only makes it all the more devastating when they are taken away too soon.

I wanted to take a moment to say goodbye, and thank this incredibly talented actor for his passion, and dedication. 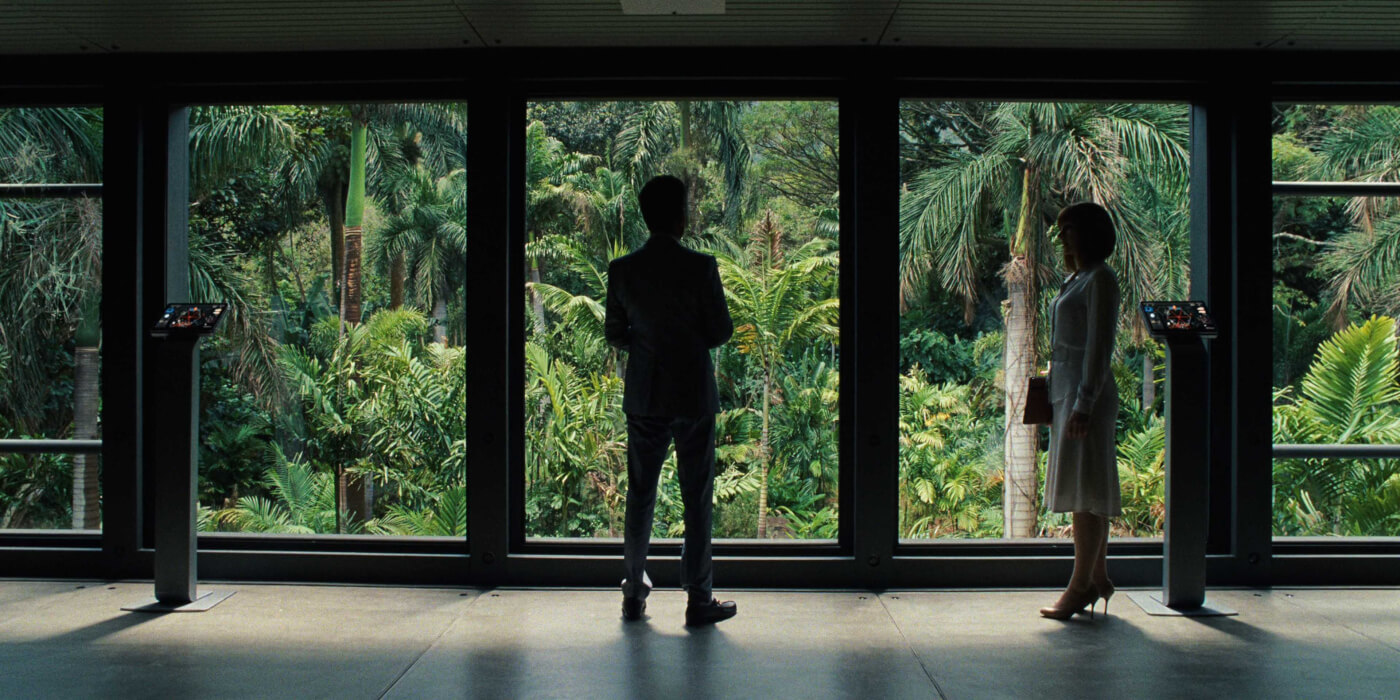 I remember watching the moment Irrfan Khan is introduced as Simon Masrani for the first time on the big screen. You can’t help but smile. Filling the shoes of a John Hammond-like role is no easy task, but Khan did it with such ease in his first few moments on screen, that I was sold. Khan portrays Masrani as a kind-hearted, adventurous soul who wants people to appreciate life and the mystery, and grandness of it all.

Anybody who has watched interviews with Khan, or watched his other work, can see that was the kind of actor and creative person Irrfan Khan was. He valued every little moment and choice.  That spirit is forever captured in film. 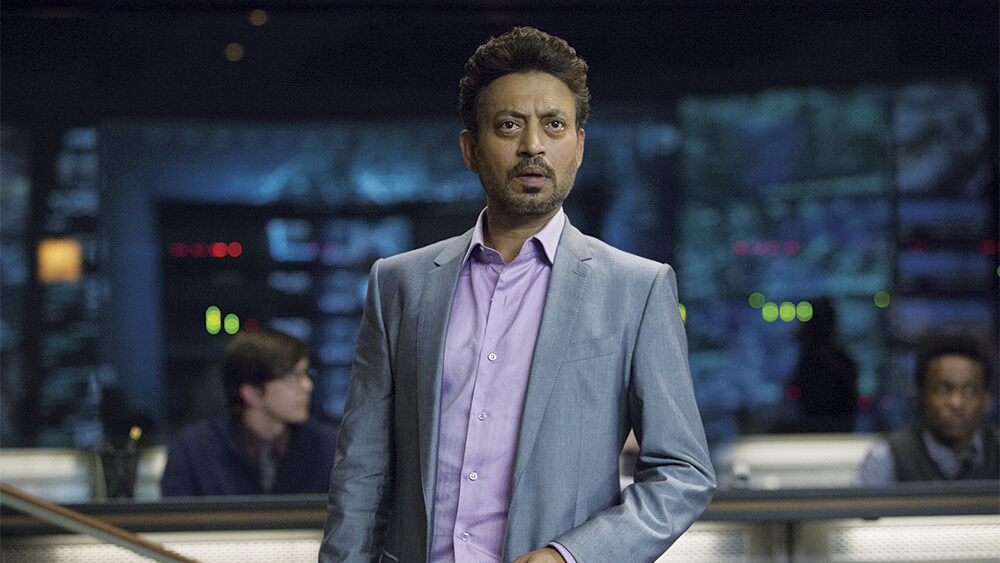 For Jurassic fans specifically, we have been gifted with a memorable performance by Khan, that solidified his place in the world created, and also in our hearts. His excitement and love for the dinosaurs and the park that he owned was palpable, and made it all the more fun for us, as viewers, to finally experience a functioning park. His energy, and enthusiasm are infectious and leap off the screen.

Ultimately, that’s what we need right now.  In this time where so much is happening around us, and after loosing such a talented person, we can find strength and reassurance in the characters Khan left behind for us to treasure forever.