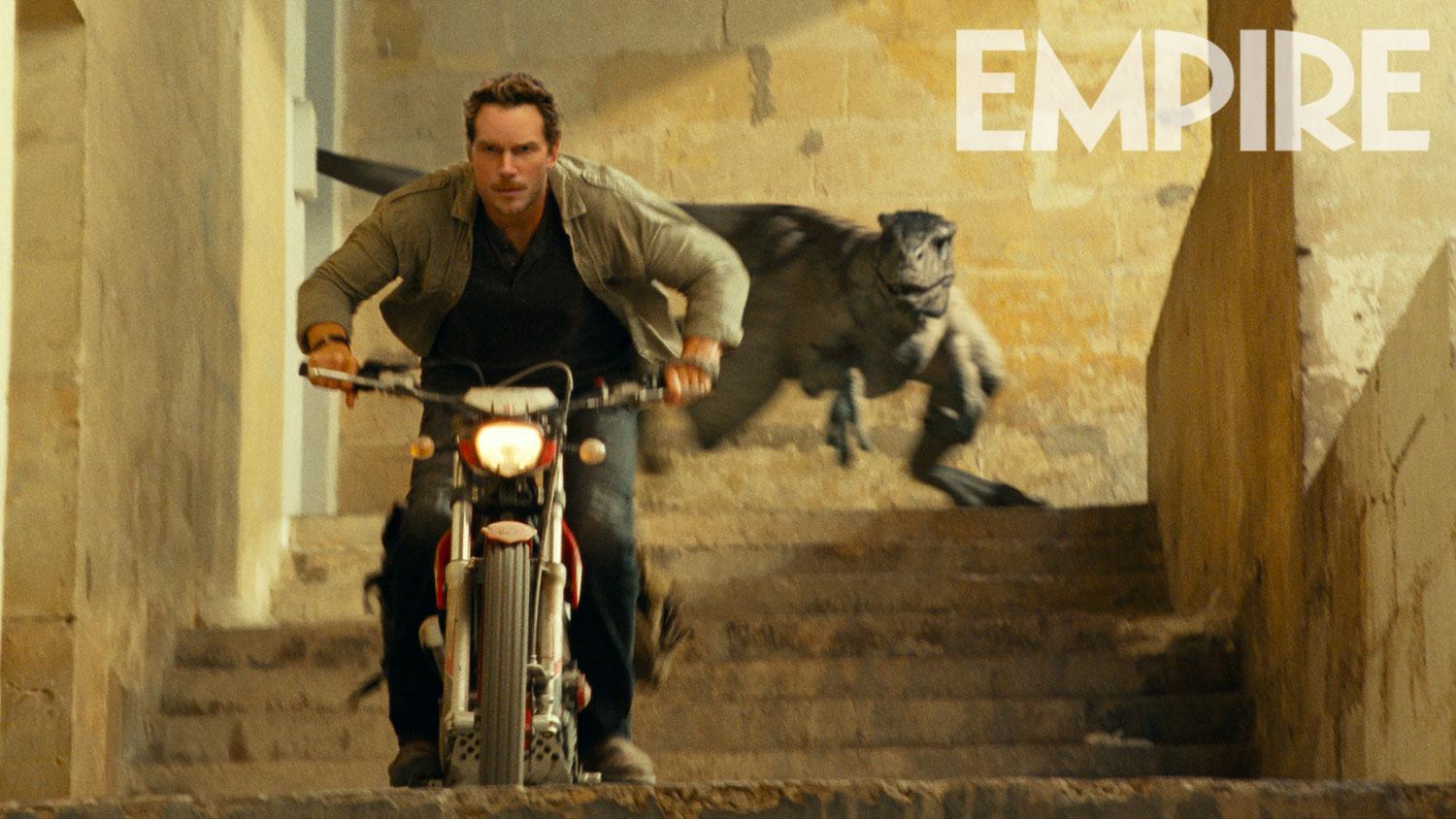 EMPIRE magazine has the scoop with a new image from ‘Jurassic World: Dominion’!

Director Colin Trevorrow describes the image for us:

“It’s a sequence set in Malta. And the picture speaks for itself – it’s Chris Pratt being chased by an Atrociraptor. And if they catch up, he’s gonna die, I can tell you that.”

With Pratt riding a motorcycle down a weathered stone staircase somewhere in Malta (never a good idea), the image resembles a James Bond movie more than ‘Jurassic Park’. This is now our second real look at dinosaurs in an urban environment for the film (after seeing the Tyrannosaurus Rex at the Drive-In, although that sequence may not even appear in the film itself). The dinosaur in this photo is a newcomer to the series: Atrociraptor.

Trevorrow explains what makes the Atrociraptor different from a Velociraptor:

“Where the Velociraptor is a little bit more of a stealth hunter, the Atrociraptors are a bit more brutish. […] These things will just come at you. And in this particular case, they’ve picked his scent, and they’re not going to stop until he’s dead. They’re pretty brutal. They’re pretty vicious.”

It’s interesting that he sees these details as the differences. Since ‘Jurassic Park 3’, the Velociraptors of the franchise have changed into more intelligent and stealth hunters compared to the brutish, murderous qualities we saw in ‘Jurassic Park’ and ‘The Lost World’. It sounds like the Atrociraptors are a return to form of the early qualities of the Raptors more than something truly new.

Still, it is exciting to have any new form of dinosaur in the series. The article confirms there will be even more, such as Pyroraptors and Moros intrepidus.

According to EMPIRE, there will be even more revealed about ‘Jurassic World: Dominion’ when their December 23rd issue hits, so stay tuned to Jurassic Outpost for any future details!

Do you think there’s just No Time To Die for Owen in this image, or is it an atrocity? Share your thoughts in the comments below! 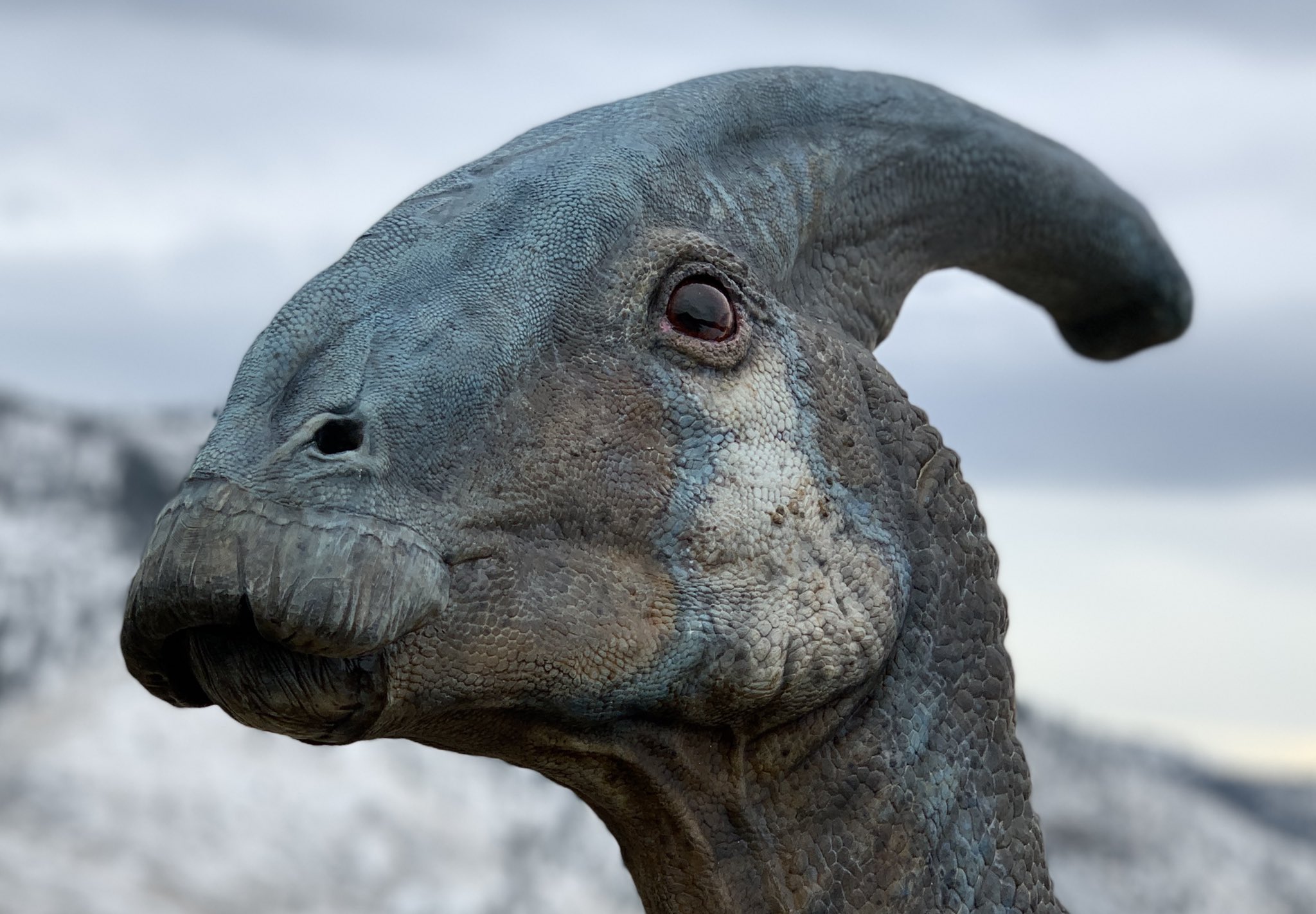 After an image of Owen and a parasaurolophus in the Sierra Nevadas was revealed earlier this week, Jurassic World: Dominion director Colin Trevorrow took to social media to reveal another new image of the species from his time shooting the film.

We just used real ones this time. pic.twitter.com/IxdyH8kF9v

“What species is this?”

This parasaur seems to be in the same snowy environment as the image with Owen. Interestingly, both the Owen image and this new image feature re-designs in relation to past parasaurs in the Jurassic franchise. In response to a little speculation and confusion about the species, Trevorrow clarified:

As far as the re-design is concerned, it could find its explanation in these dinosaurs being made by a company other than InGen (BioSyn, perhaps?). Trevorrow laid some of the groundwork for this type of plot explanation in an interview with Jurassic Outpost shortly after Jurassic World: Fallen Kingdom‘s release, which you can read here. While the image from earlier this week is CG, this latest parasaurolophus is a maquette used for visual reference during production on Dominion – and we have to say, it is beautiful.

What do you think about this parasaurolophus image and its implications for Jurassic World: Dominion? Comment below with your thoughts and stay tuned to Jurassic Outpost for the latest news! 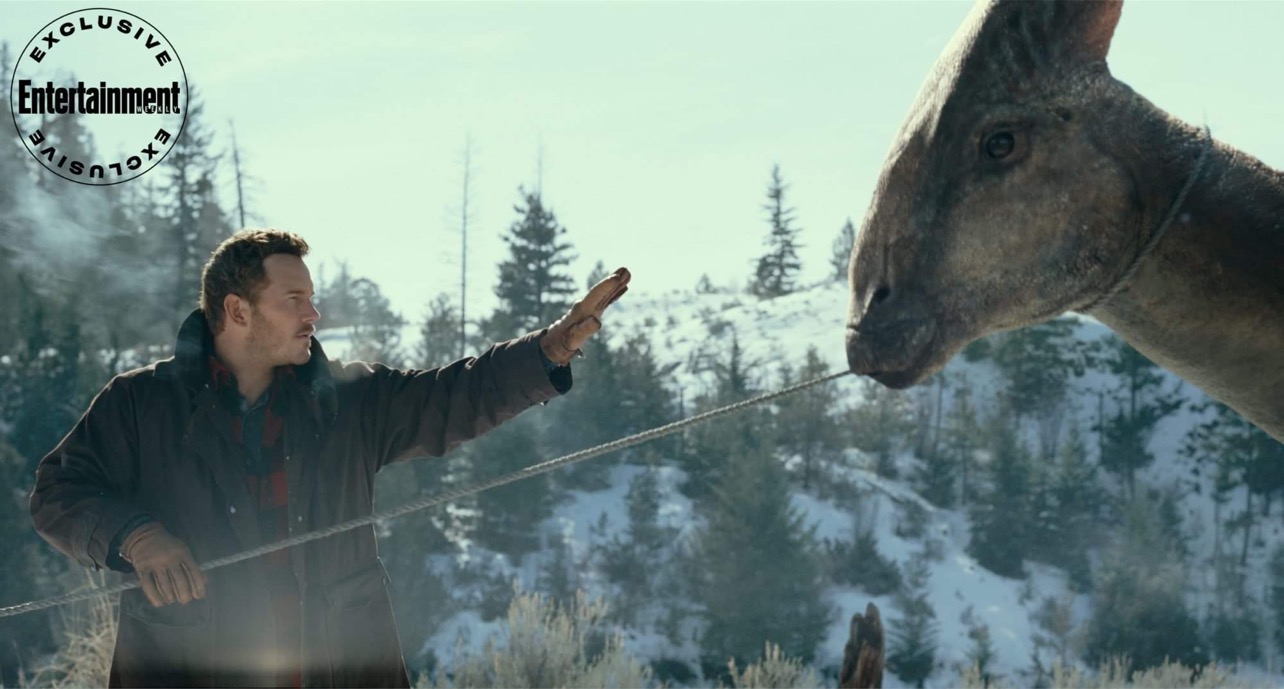 Entertainment Weekly has revealed a new image and some interesting plot information in the Jurassic World: Dominion exclusive from its 2022 Preview, on newsstands this Friday.

The featured image finds Chris Pratt’s Owen Grady “rounding up parasaurs in the Sierra Nevadas,” according to director Colin Trevorrow. This parasaur sports a completely new design, different from any past entry in the Jurassic franchise. Trevorrow continued:

“He’s not too far from where the dinosaurs got out in the last film. The parasaurs are in danger of being poached. There’s a lot of shady types out there who want to get their hands on dinosaurs, so he’s working to protect them.”

Trevorrow went on to elaborate on a couple of plot elements from Dominion, saying:

“They [the dinosaurs] have been multiplying and living amongst us and clashing with us … Dominion is set all over the world, through many different environments: wilderness, urban, desert, snow. It’s exciting to see these creatures navigate environments that they weren’t built to survive in. They grew up in a theme park and now they’re here!”

According to the article, Dominion takes place four years after 2018’s Jurassic World: Fallen Kingdom – enough time for dinosaurs to have found a way to spread around the globe. Owen and Bryce Dallas Howard’s Claire are still attempting to save the dinosaurs when the film starts. When asked where exactly Claire is, Trevorrow responded:

“I don’t want to say just yet … But she’s at a point where she’s questioning her methods, and whether she can stay safe and fulfill the responsibility that she has to the other people in her life that care about her.”

Equally intriguing is what Trevorrow had to say about Campbell Scott’s Lewis Dodgson:

“He is the main villain throughout both of [Crichton’s] novels, and I think what Campbell’s done with the character is just amazing. I can’t wait for people to see it.”

That’s a strong hint that Dodgson will play a big role in Dominion.

The new image and story details revealed in this Entertainment Weekly exclusive are very exciting. You can read their full article here.

Check out our full video breakdown of the new image and Dominion information below:

This film is looking fantastic from what we’ve seen so far. What do you think about this new still and plot information? Let us know in the comments below, and stay tuned to Jurassic Outpost for all the latest news! 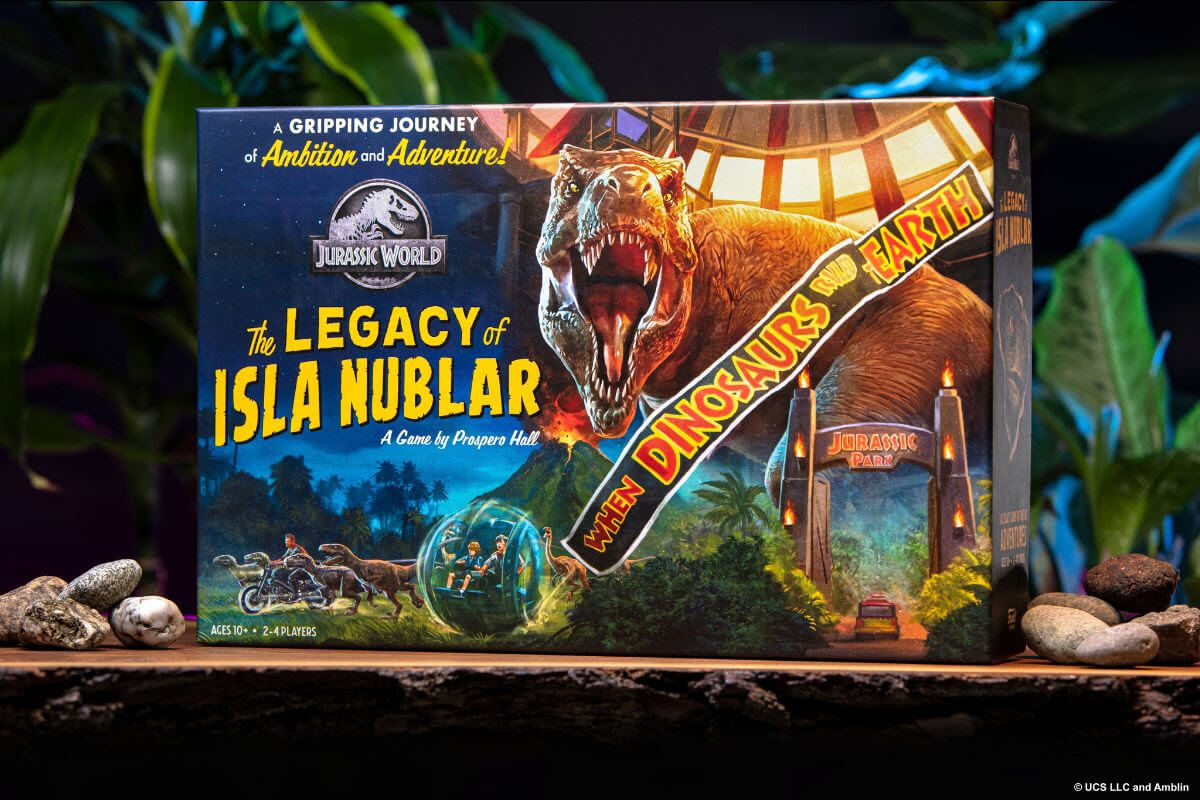 A game 65 million years in the making! #JurassicWorld: The Legacy of Isla Nublar from acclaimed studio #ProsperoHall is coming to #Kickstarter in March. Follow the Kickstarter today and be notified when it launches!https://t.co/aALNThA36e pic.twitter.com/FmILUw3cR1

The game was first teased back in September, and Polygon shared the exclusive reveal today.

Exclusive preview: The new Jurassic World board game is the perfect match for a legacy-style campaign https://t.co/RwB1XfpE2B pic.twitter.com/nsaHpvxeiP

View the full First Look at Jurassic World: The Legacy of Isla Nublar video below:

Funko Games will also be sharing an exclusive first look at Jurassic World: The Legacy of Isla Nublar at PAX Unplugged 2021:

Going to #PAXUnplugged? Join us in Booth #3207 for a first-look at Jurassic World: The Legacy of Isla Nublar!

You can view a few gorgeous images of the game and gameplay below:

We are sold on this game on the fantastic artwork and font choices alone. You can view and support its Kickstarter here.

What do you think? Are you excited for the release of this new game? Let us know in the comments below, and stay tuned to Jurassic Outpost for all Jurassic news!