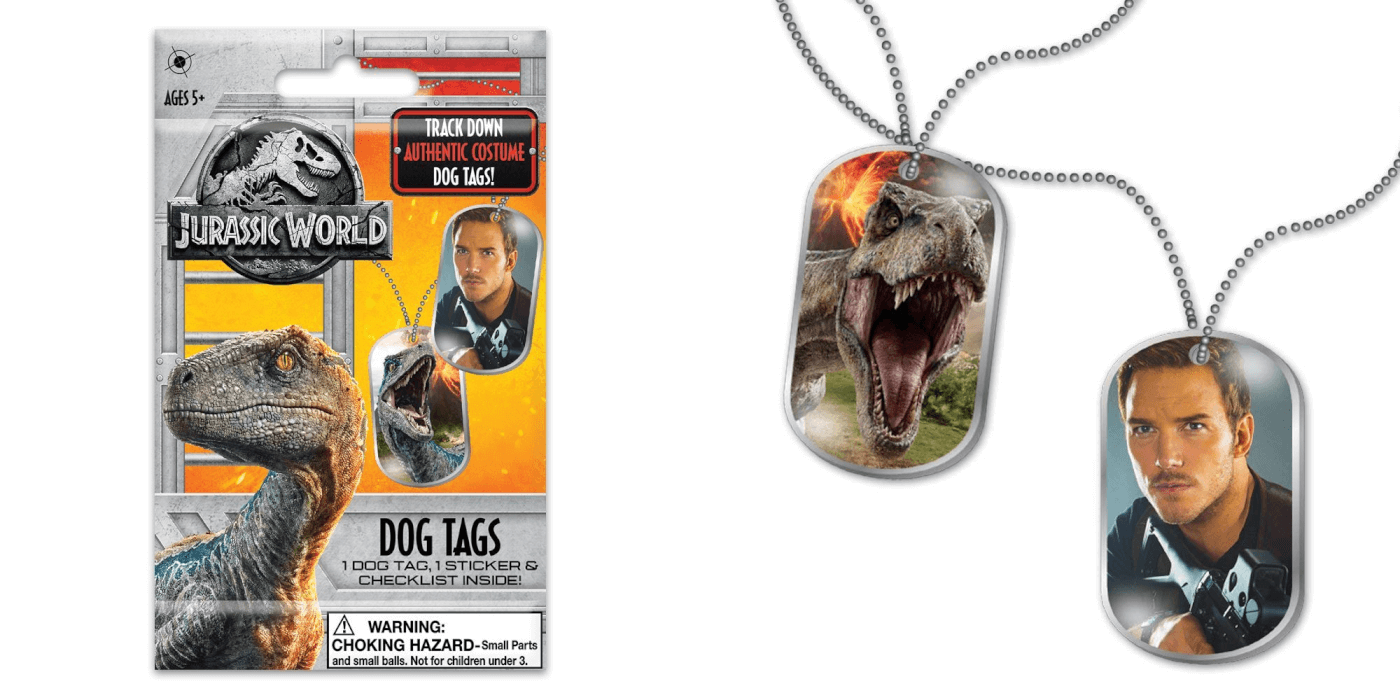 Get ready to join the Dinosaur Protection Group and fight for the rights of dinosaurs everywhere with your very own collection of Jurassic World: Fallen Kingdom blind bag dog tags, trading cards and light up keychains.

Each dog tag is packed with 1 dog tag, 1 sticker and the complete checklist, the checklist is especially helpful since BullsiToys boasts an impressive 24 unique character and dinosaur collection lineup. In addition to the quality crafted, sturdy, metal dog tags; complete with a strong necklace chain, the dog tags are nicely sized and nicely weighted so kids can enjoy the tag time and time again, or adult can display.

BullsiToys also offers rare parallel foil tags and 3D dino stickers and my personal favorite, the authentic costume dog tags. Have you ever wanted to own an actual piece of the Jurassic franchise, without breaking the bank? Within each authentic costume dog tag is a costume piece worn by the 7 stars of the film. Personally, I had taken notice to BullsiToys and the Jurassic World Dog Tags during 2015’s Jurassic World well before writing this review. I was completely impressed with the quality and fairness in terms of price (Around $3.99 at your local Target or Amazon) and amount of unique dog tags and costume pieces that were included in each variety box of the product. The same can be said about the Fallen Kingdom tags as well.

These dog tags are a must for any Jurassic fan, no matter if you’re a kid or a kid at heart.

In addition to the dog tags, BulliToys has released a set of 8 unique light up keychains. On initial opening, I was extremely impressed with the attention to details and colorings that Bulls-I uses to recreate the dinosaurs of Isla Nublar. Each dinosaur is soft, lightweight and bendable, making for a comfortable and surprisingly useful part of any keychain assembly. The light is bright and does its job sufficiently for adults and will be amusing for kids to collect them all. Bullsitoy’s quality efforts are palpable in the release of new merchandise pertaining and catering to Jurassic Universe fans.

If you ask any Jurassic fan what they’ve been asking for since the release of Jurassic Park in 1993, many will reply, “trading cards”. In 1993, Jurassic Park launched a series of trading cards that grew extremely memorable and successful for its fans. Since the release of the first film, no serious efforts have been released until now. BullsiToys does not fail to impress with its 88 card comprehensive set.

The range expands 39 film scene cards with high definition glossy images on each card, 15 unique dino cards, 9 glow in the dark cards, 9 heat ‘n reveal cards, 9 3D action lenticular cards (a callback to “The Lost World” Jurassic Park” movie cover) and as with the dog tags, 7 costume cards. Each costume card is well comprised and strong with a postage stamp size swatch of clothing, with the corresponding character featured on the card, indicating the stats.

Doubtless, the Bullsitoy line up for Jurassic World: Fallen Kingdom is great for anyone who is a fan of the films. Their unique and comprehensive lineup of collectibles is entertaining, fun and downright addicting to collect; most of all, not only is the assortment diverse and high quality but also extremely affordable and fun. The blind bag feature treats every trip to Target as an adventure, 65 million years in the making. It is apparent that the company cares deeply about providing a great amount of detail and enjoyment to whomever encounters their products. But similar to dinosaurs, get them fast before they’re extinct.