At long last, we’re happy to exclusively present the entire story arc of the first season of Jurassic Park the animated series. ‘Escape from Jurassic Park’ was meant to be a prime-time television series, utilizing state-of-the-art animation to directly followup the events of the first film. Unlike other animated series, this was not meant to be a cartoon aimed at younger audiences, but rather targeted at the audience of the Jurassic Park film, which it would be tonally consistent with.

Sadly, the animated series was eventually cancelled before completion, and was seemingly lost to time. But much like the study of dinosaurs themselves, we did some intensive digging and uncovered the remains of something long thought extinct. This story outline was created at the now defunct Universal Cartoon Studios in 1993 – prior to the theatrical release of the film. Development lasted for some time, before the project abandoned in 1994.

Scans for authenticity – full transcript of the script below.
This (non final) story outline was used as the basis for the script and series development, and was only seen by key individuals, such as Steven Spielberg. It’s currently unknown if more detailed scripts existed for the episodes within, or if an outline for Season 2 was ever explored. Every day new discoveries from the Jurassic past are revealed, so if you have anything to share please do not hesitate to get in touch! Until more information is uncovered, enjoy the first ever, and quite possibly the only reveal of ‘Escape From Jurassic Park’!

After digging in, be sure to read our breakdown below, and view the art gallery from the series:

What a wild ride that story is – and a cliffhanger ending at that! It’s not entirely clear why the series was abandoned – some reports say Steven Spielberg pulled the plug after getting frustrated with all the merchandising for Jurassic Park while working on Schindler’s List. However, while there may be some truth to that fact, I have also heard he may have pulled the plug to avoid overlap, or canonical inconsistencies with the planned theatrical sequel (something I have heard happened again with a Jurassic World animated series).

The story shares many similarities with Michael Crichton’s ‘The Lost World’ – which was released in 1995. These include Lewis Dodgson, and a BioSyn team stealing eggs from nests to build their own park elsewhere, all while animals show up on South American mainland leading to a government coverup (due to fears of it hurting tourism). Of course, there are many differences as well – the animated series takes place on Isla Nublar, the home of Jurassic Park, while The Lost World takes place on Sorna, Site B. Further, the outbreak of dinosaurs on mainland is due to BioSyn, who purchase 100 square miles in The Amazon to build ‘DinoWorld’ – a fully fledged Dinosaur safari park with hotels, monorails, and more (much like the park in Jurassic World, ‘DinoWorld’ is inspired by Disney World.)

The story featured many brand new concepts and  dinosaurs – some even got Kenner tie-in toys in 1994, including the “Dino Wranglers”, and the fanged Lycaenops, or the Komodo Dragon-like Ornithosuchus. I think perhaps the most intriguing part is Season 1 ends with Jurassic Park finally opening to the public (much to the dismay of Malcolm, Grant, and Sattler) . You could easily imagine the second season following a similiar arc of  the story presented in Jurassic World, only with BioSyn shenanigans, the threat of animals on the mainland, and 100% less militarized hybrids.

I’m certainly bummed that the series was never developed – although, it would admittedly have greatly impacted the stories of future films. In a lot of ways, this is the sequel fans have imagined for years, yet never got, loaded with healthy doses of childhood imagination interjected with Michael Crichton’s themes and story development. Before we close off, I want to present a gallery of the stunning artwork created by William Stout, a key mind behind the ill-fated series:

What do you think of the story of ‘Escape from Jurassic Park’? Be sure to sound off in the comments below – it’s hard to believe we can finally learn about this series after nearly 25 years! And again, if you have more to share please don’t hesitate to get in touch – we hear an animation demo for this series still exists somewhere, waiting to be found.

As always, stay tuned for the latest news, features, and exclusives!

The Hollywood Reporter have exclusively revealed that Justice Smith, who recently starred in Baz Lurhmann’s The Get Down, has joined the cast of the upcoming Jurassic World sequel, set to be directed by J.A. Bayona.

The announcement comes after a string of new casting tid bits over the past couple of weeks, including the casting calls for Lucy and Clint, and Toby Jones and Rafe Spall also joining the cast alongside Bryce Dallas Howard and Chris Pratt.

It is uncertain at this point who Justice will be playing, but it is possible that he will be playing the role of Clint – whose casting calls have described him as a twenty something male technician with a certain apathetic sense of ‘unsure of himself and the situation that he is in’.

Variety have reported that he will be playing a young scientist in the movie.

Justice Smith has appeared in Paper Towns and will be starring in the Off-Broadway play Yen which opens on January 30th.

If you need a quick way to find out everything we currently know about the sequel, be sure to watch our catch-up video below! 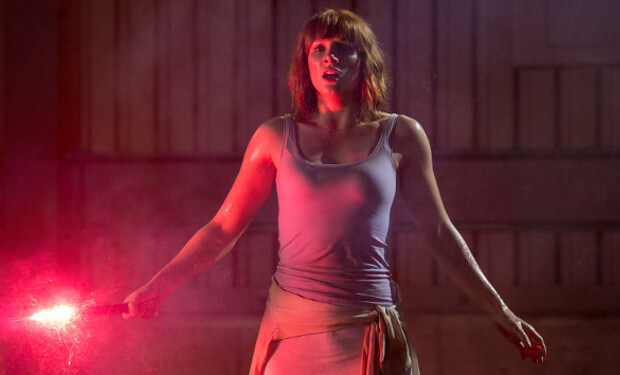 One of the biggest complaints people seemed to have about Jurassic World was that Bryce Dallas Howard’s character of Claire wore high heels throughout the entire movie. Running through the jungle and even out running a T-Rex in route to saving the day.

Most fans just roll their eyes now when people and articles still bring up this supposed “controversy” but Jurassic World director Colin Trevorrow decided to poke some fun at it today when he revealed the shoes that Claire will be wearing in the upcoming sequel.

Included with the above photo, Trevorrow simply tweeted:

Are you happy that Claire will be trading in the high heels for boots in the upcoming sequel due on June 22, 2018? Let us know your thoughts in the comment section below and on our forums.