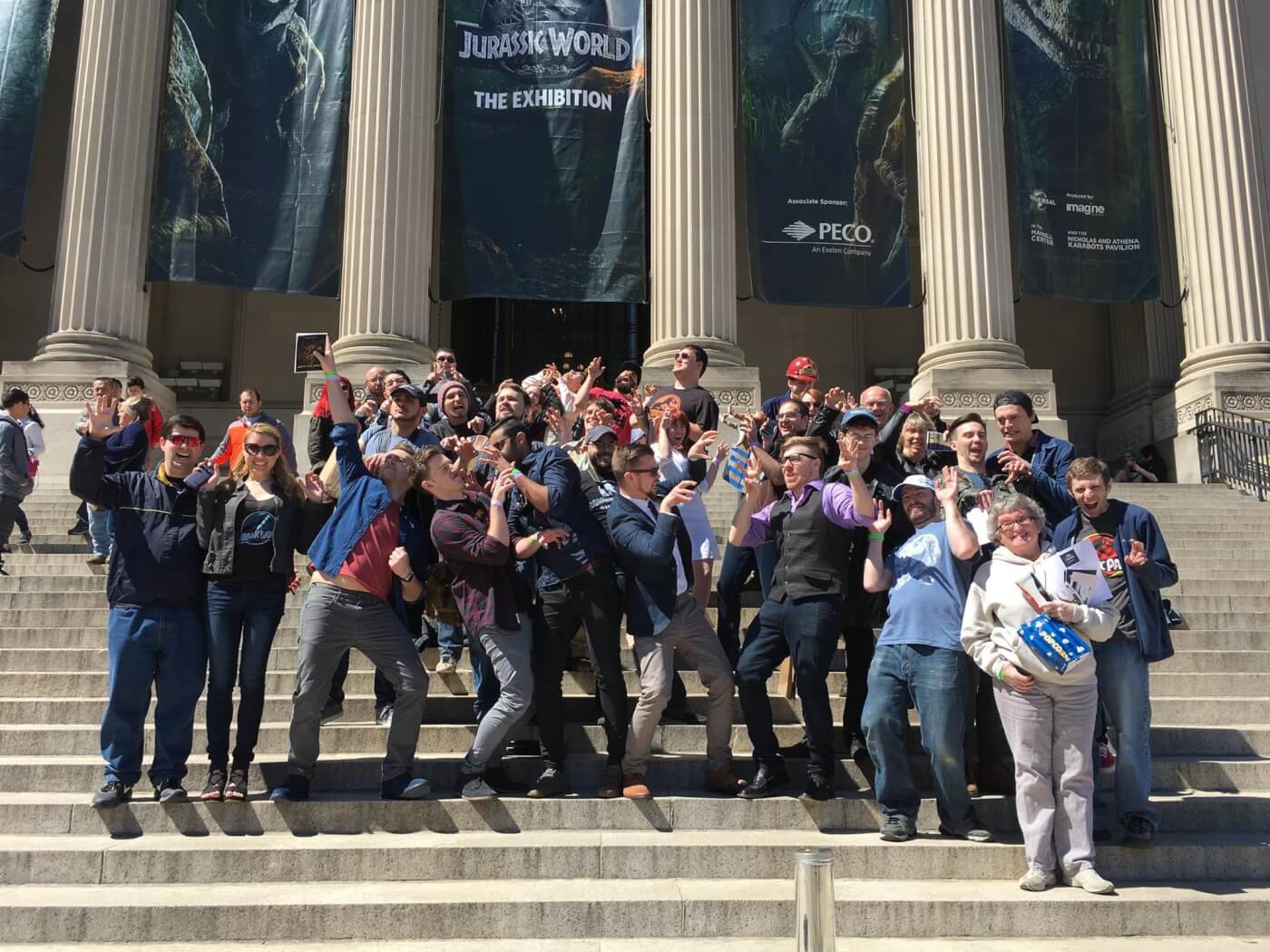 Wow. That’s pretty much the ideal word to describe this weekend. What a turnout. What a good group of fans. What an event.

After working in collaboration with Universal Pictures on this event for a good few months now, it was exciting to finally see it all come together on April 2. The weekend hadn’t provided the best weather in Philadelphia, but the skies cleared that morning giving us little wind and bright sunshine all day.

Arriving around 11am, for many of us this is our first visit to The Franklin Institute and to Jurassic World: The Exhibition which, to any Jurassic Park fan, is exciting enough in itself! The Franklin is tremendous and the Jurassic World banners flowing in the wind highlight their biggest attraction to date.

After the Outpost team had sorted our equipment, sign-in table and logistics with the museum representative (and manager of Jurassic World: The Exhibition!) Michelle – who was amazing to work with, and so enthusiastic about the Exhibition and about our event – we stationed ourselves outside the main entrance on the steps leading into the museum. This is where fans began to arrive and we took our group photo – #SaveOurSaurs!

First up: Jurassic World in 3D. Although it turns out Universal had some technical issues with the 3D copy, and instead announced that we would be watching Jurassic Park in 3D. Maybe they did not expect the response, but the crowd roared with excitement and we sat to watch our favourite film.

Next up: Dr. Jack Horner graced us with his presence and answered many questions from fans, submitted both through the Jurassic World social pages and directly from us. Jack was really on form, so passionate about the movies and the dinosaurs that feature in them.

He explained the current status of his Chickenosaurus which is roughly three years away from completion, with only the tail left to genetically modify! He wants to see a Carnotaur in a sequel, and is excited for Jurassic World 2 which he promised has a fantastic script. Check out the audio from the Q&A below!

Those attending got the opportunity to meet Dr. Jack Horner in person, and while we did pry for sequel news, unfortunately his lips are sealed! Interestingly enough, when Ryan asked about the skeleton of the Triceratops looking dinosaur in the first official set picture from the sequel, he said it was a “Fake-a-saurus”…

The Velociraptor Meet & Greet was next, where we got to interact and meet Echo, the human in a Raptor suit. It was impressive to see up close and we learned that Echo was on her way to Chicago!

The discounted tickets for the day included entry between 5pm and 7pm to the Exhibition itself so we headed on through – what an experience! The museum, Universal and the Creative Technology company have really designed something special here, no wonder it is their busiest attraction! We learned that some props from the movie made it into the Exhibition, so seeing those up close is quite something! Check out this video from the Exhibition by Kerr Robinson!

After the event, the team from the Outpost (and a few others) headed to film a behind the scenes interview with Steve – Head of Creatures at Jurassic World: The Exhibition. He demonstrated how the T. rex operates and gave us great insight into how the Exhibition came together, and how it all works! He even let Chris operate the Rex! Check out the interview below, and huge thanks to Steve for taking the time to speak with us.

We had collaborated on this event with Universal and organised the schedule, but they truly surprised us in the screening by announcing canapés and cocktails after we have made our way through the Exhibition, to celebrate! This provided time to really meet and talk with those who had attended, and it truly was great to meet so many passionate fans!

The event went smoothly and everybody attending appeared to have a great time! With the little notice we had to actually advertise the event, Chris and I expected maybe 30 fans to attend. When we arrived, 83 tickets had been purchased, and the final figure made it over 100! How amazing is that?! We can’t thank you all enough for making your way to Philadelphia for this – the first official fan community event! It was fun to plan and equally attend, and meeting so many fans that we’ve known online for years made it all the better!

As for the weekend, it was the first time any of the Outpost team had met, and we all agreed it went too smoothly. Bros for life – I think the combination of Jurassic Park (well, The Lost World) quotes, pizza and a touch of alcohol solidified our friendship past online friends.

We were inundated with photos, messages and posts from the big day and we’re still working our way through it all now! So many of you shared your event photos and it really is so amazing to read your messages! We’re so happy you enjoyed it. Shoutout to the Jurassic Park Motor Pool who made it down with a Jeep, and a huge shoutout to Jaroslav Kosmina who created a unique gift for those who attended (email us if you missed out – these were distributed at the cocktails part)!

Ethan Pettus also attended and handed out zines for his upcoming novel, Primitive War! Dr. Jack Horner was in awe at the concept art showing feathered dinosaurs, and I know he kept both a copy of the zine and Jaroslav’s sketch – both impressive!

Sitting here writing this, there’s still so much to go over, review, and edit, but some fans have reviewed the event, check out Jurassic Sean’s review below! Glad you made it out man!

We also featured on the official Jurassic World’s social feeds, check out the gallery below:

We have numerous videos coming from the event including an exclusive behind the scenes look at the T. rex and an interview with Steven of the Creature Technology Company. Photographer Tim Cianfano was taking photos throughout the day which you can see more of at the gallery here!

Tim also took photos through the Exhibition and created this photo series, called Jurassic Contrast. Check out the photos below!

The event went down without a hitch and we were amazed by the turnout. Jurassic fans truly flock in herds, and I’ll keep saying it – it was amazing to meet so many of you. What a fandom this is! We want to thank everyone who made it down, and everybody at The Franklin Institute who were so helpful and accommodating throughout the day.

And of course, this is the first time Universal Pictures have worked with a fandom, not just for Jurassic Park but for any franchise, and I can honestly say that it was so rewarding. Darice, J.P., Molly, Shayne and everybody else who worked with us, thank you.

Check out the video from the event, showcasing the day’s activities!

If you attended the event then please share your photos with us and let us know how the day went for you! You can use the Facebook Event page to share photos and stories.

It’s time to visit an old friend once again! The original Tyrannosaur from Jurassic Park and Jurassic World will be returning in the highly anticipated sequel. Confirmed yesterday by Jurassic World 2 Writer/Producer Colin Trevorrow in response to a concerned fan questioning whether or not ‘Rexy’ would be returning on behalf of her young daughter.

Confirmed. Tell her when she wakes up. https://t.co/d39LBJ7LK5

Now that it is confirmed she is returning, we can start speculating about the sequel and how she fits in to the plot.

This confirmation of the original Rex returning more or less confirms that Isla Nublar is returning. While this may be obvious based on what we have already seen and heard, this certainly adds more credibility. In addition, it will be interesting to see if the senior-citizen Rex will return as an animatronic creature as opposed to its CGI counterpart in Jurassic World.

Let’s us know what you think about this news and if you’re excited to see the classic Rex return again!

Tomorrow is going to be a big day for Jurassic Park fans in Philadelphia – if you’re not sure what we’re talking about look below! That’s right, for the first time ever, Jack, Asees, Alex, Chris, Ryan and Josh are finally meeting up together in order to put this event together for the Jurassic community.

A brief recap of Sunday’s events:

Tickets: https://tickets.fi.edu/webstore/shop/viewItems.aspx?cg=11&c=16
Use code OUTPOST to get $5 off of your ticket for an exhibition tour between 5-7pm, a 3D screening of Jurassic World and a Q&A with paleontological advisor to the films, Jack Horner.

We cannot wait to see you all there!