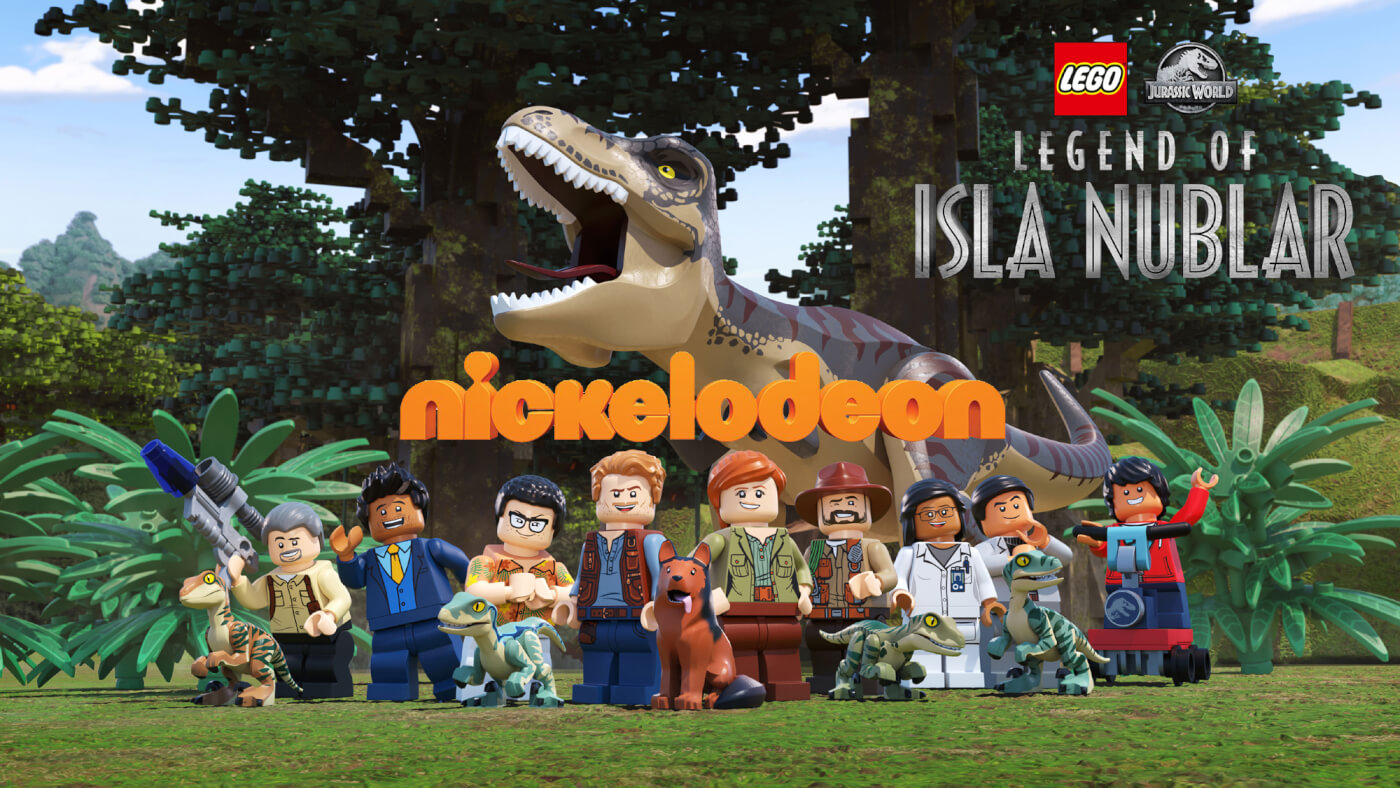 The Licensing Expo today released their August 2019 issue and inside it was unveiled that LEGO Jurassic World: Legend of Isla Nublar will be airing on Nickelodeon in the U.S. Previously no network or viewing platform was announced.

No exact release date has been announced yet for the the new 13 episode mini-series, but it will be a follow up to the LEGO Jurassic World: The Secret Exhibit special that aired on NBC in 2018.

Set in 2012, three years before the events of the Jurassic World movie, LEGO Jurassic World: Legend of Isla Nublar picks up where the story left off from LEGO Jurassic World: The Secret Exhibit. Newly hired animal behaviorist Owen Grady and Assistant Manager of Park Operations Claire Dearing team up on Isla Nublar to deal with everything hectic life around the Jurassic World park throws their way. And “everything” includes runaway dinosaurs, ongoing construction to expand the park, tourists everywhere unpredictable tropical weather, and an impulsive boss! Plus, a mysterious saboteur with surprising ties to the park’s past is on a quest to find a legendary treasure and destroy Jurassic World forever! What could possibly go wrong? Everything.

Thank you to Matt for sending this tweet our way. 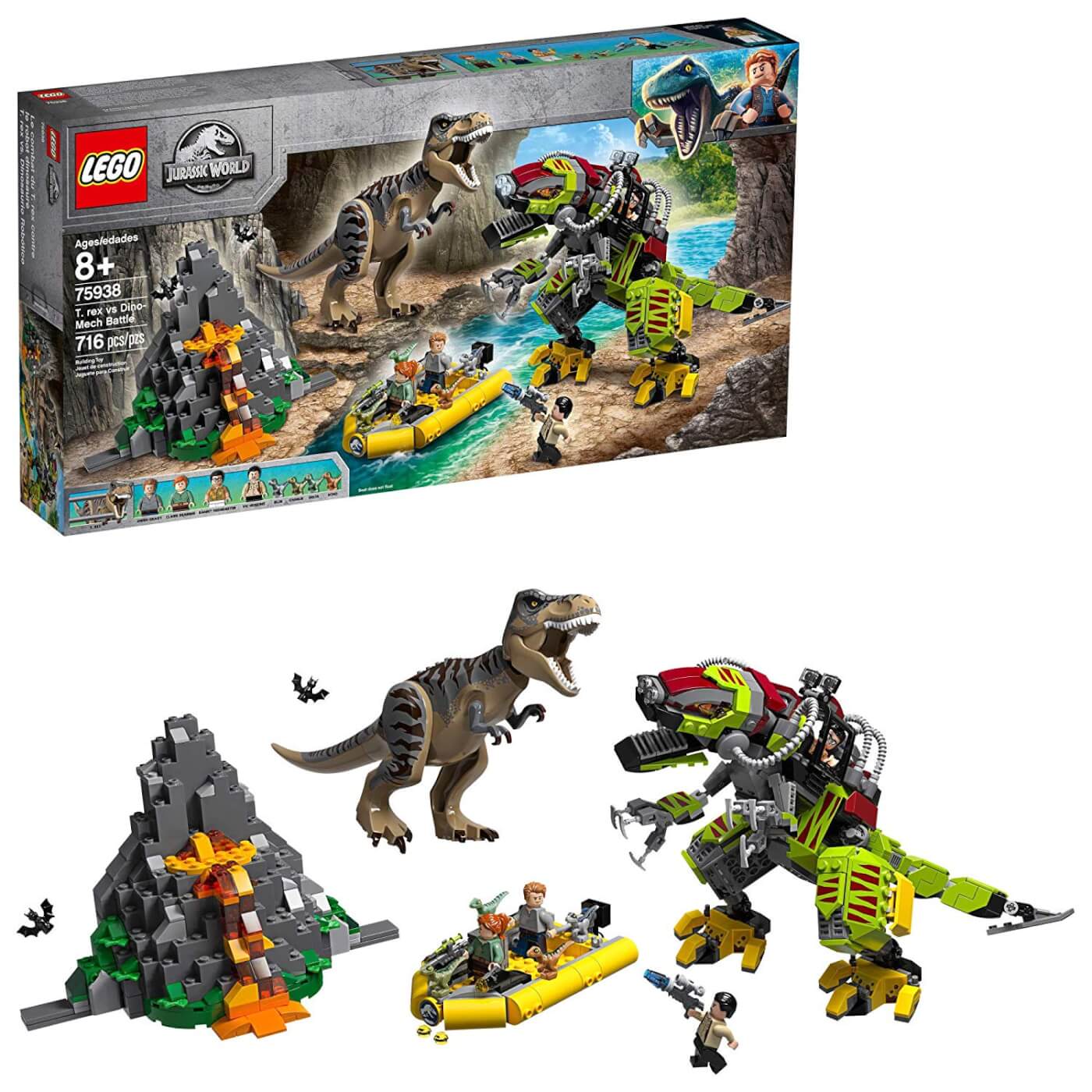 Announced at Toy Fair earlier this year, the brand new LEGO Jurassic World sets are hitting store shelves and websites in the US now! These sets are based upon the upcoming TV mini-series “Legend of Isla Nublar”, and explore Jurassic World while it was open and operational.

They’ve been spotted in stores at Walmart, and are currently available online at Amazon and Entertainment Earth – read on for the set descriptions and links to their pages to purchase online! 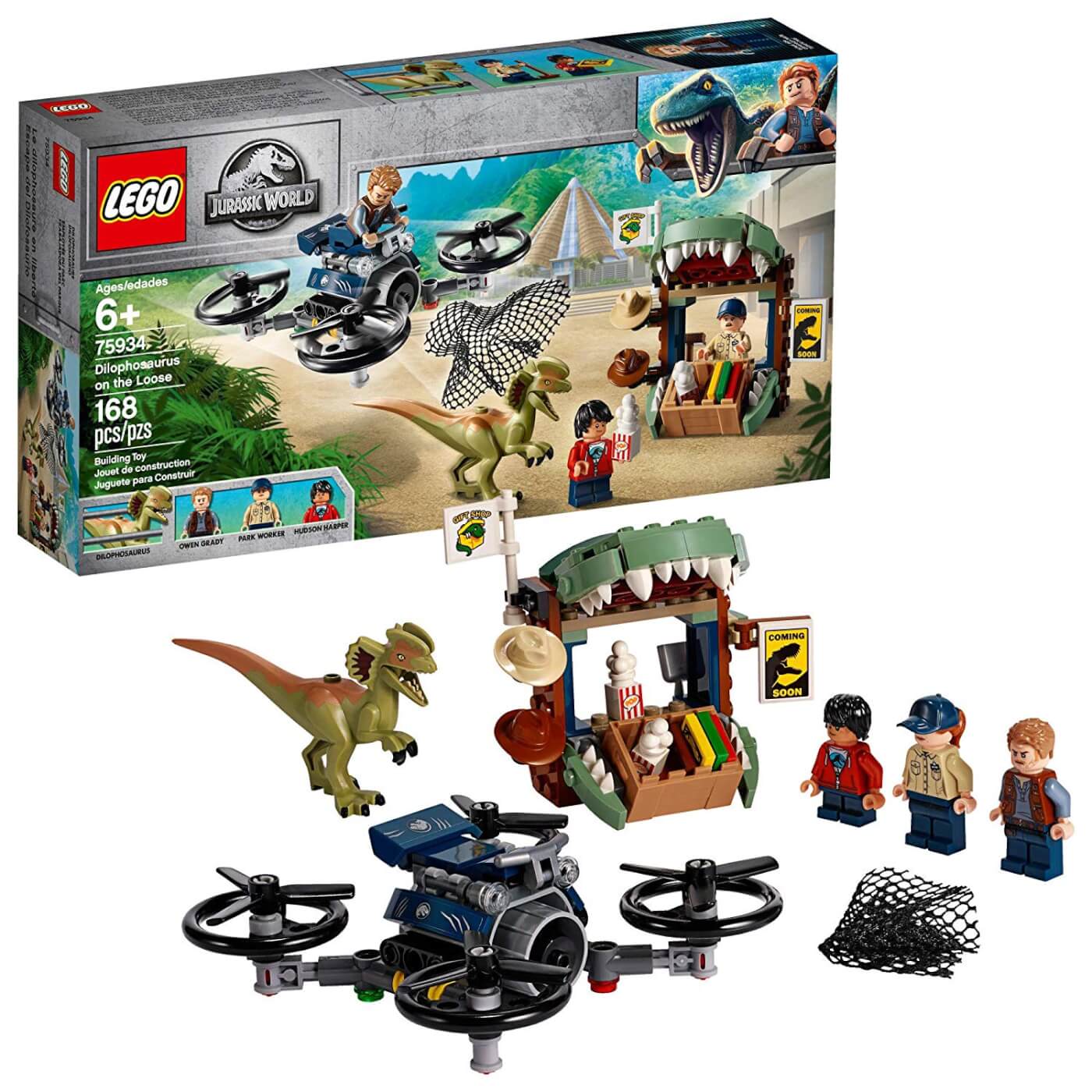 Thrilling adventures await children when they construct Owen Grady’s drone and fly to save Hudson Harper from an escaped dinosaur in LEGO Jurassic World 75934 Dilophosaurus on the Loose. The LEGO toy drone features 4 spinning rotors and a net shooter function to aim at the Dilophosaurus figure. This collectible building toy for kids also includes 3 minifigures, plus a market stall in the shape of a dinosaur’s head with lots of accessory elements to inspire creative play. 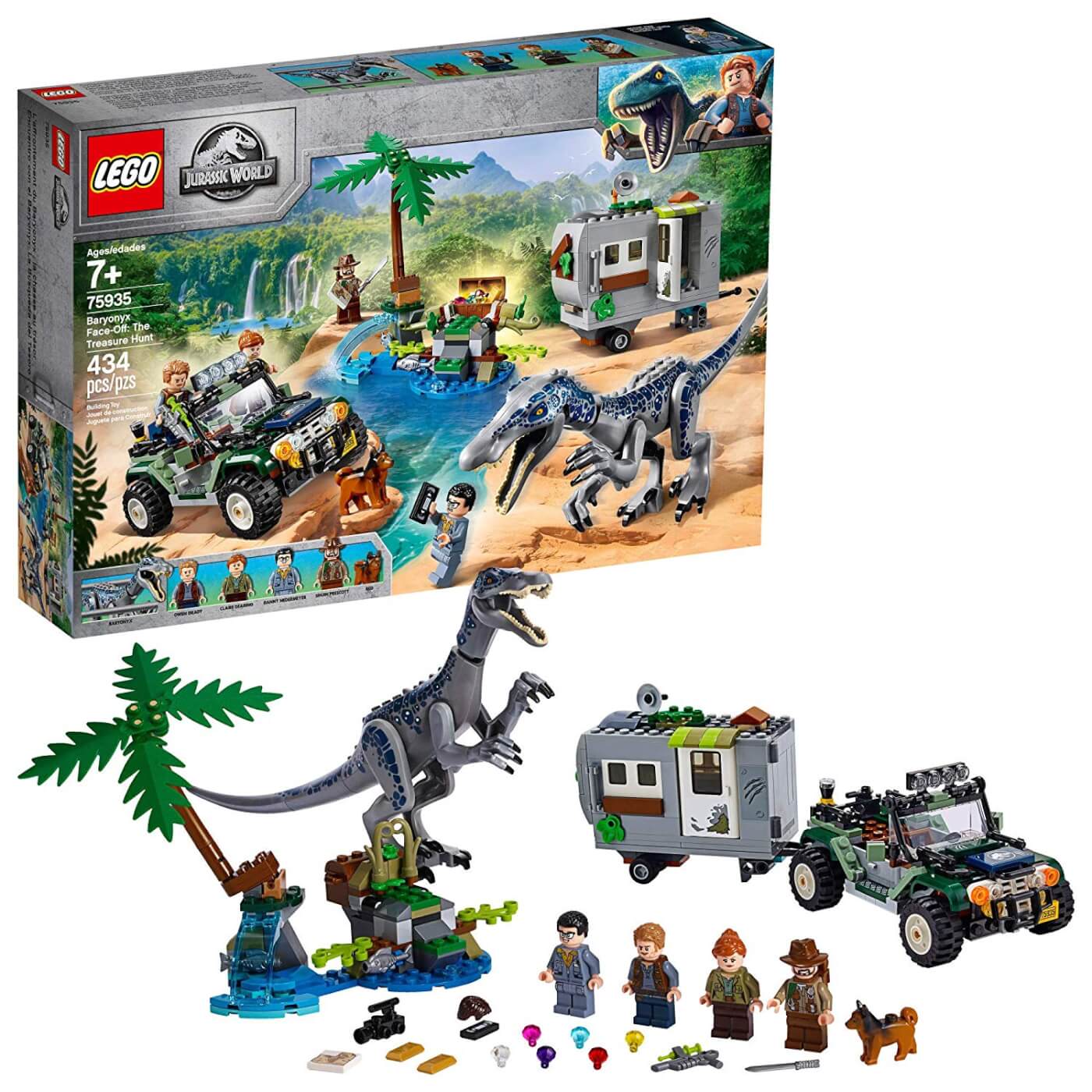 Drama awaits children as they help Owen Grady and Claire Dearing pursue bad guys through the jungle in LEGO Jurassic World 75935 Baryonyx Face-Off: The Treasure Hunt. Featuring an offroader with space for 2 minifigures and an attachment point for a trailer which has a buildable rooftop antenna and a detailed interior, plus a buildable jungle scene that has a hidden treasure chest with a revealfunction, this LEGO set makes a great holiday gift for kids. It also includes a posable Baryonyx dinosaur figure and 4 minifigures with cool weapons and accessories to inspire imaginative play. 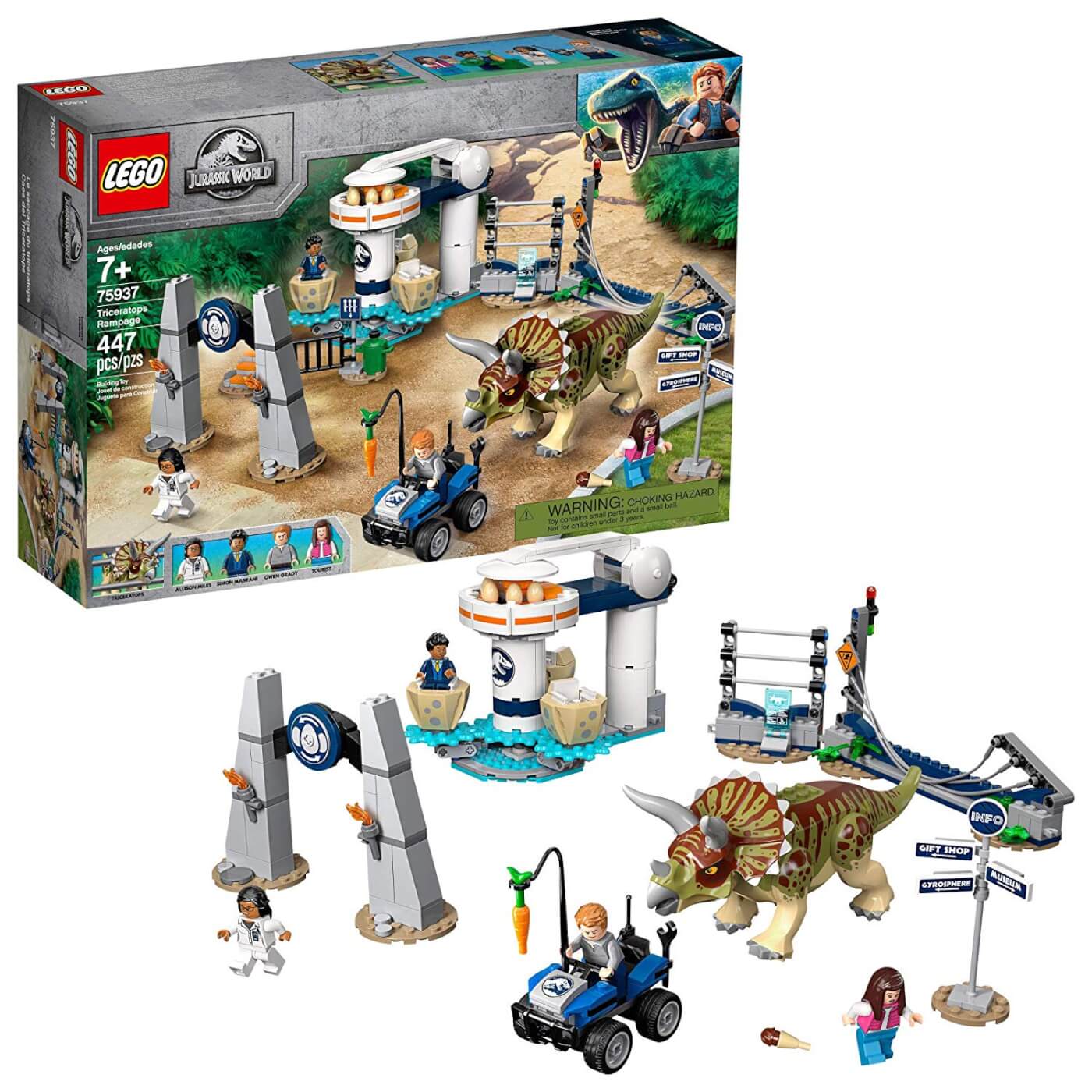 Youngsters will love creating exciting dinosaur action adventures with this LEGO Jurassic World 75937 Triceratops Rampage building toy. The colorful LEGO dinosaur playset includes an Egg Spinner ride with 3 dinosaur-egg seats for minifigures and spinning function, plus a gate and waiting area for the ride. There is also a posable Jurassic World Triceratops dinosaur toy figure, collapsible fence and a minifigure buggy to play out a dinosaur escape and pursuit. This building toy for kids includes 4 minifigures to inspire creative role-play.

Action-packed dinosaur adventures are guaranteed as youngsters play out a LEGO Jurassic World 75938 T. rex vs Dino-Mech Battle and seek hidden treasure in the Isla Nublar volcano. The buildable T. rex toy dinosaur figure and bad guy Danny Nedermeyer’s Dino-Mech are both posable and have snapping jaws, while the buildable volcanic rock has an opening function to reveal a hidden treasure chest. This Jurassic World building toy also includes 4 minifigures, 4 baby velociraptor toy figures and a boat with 2 stud shooters and a tranquilizer gun to inspire kids to role-play Jurassic World scenes and create their own stories.