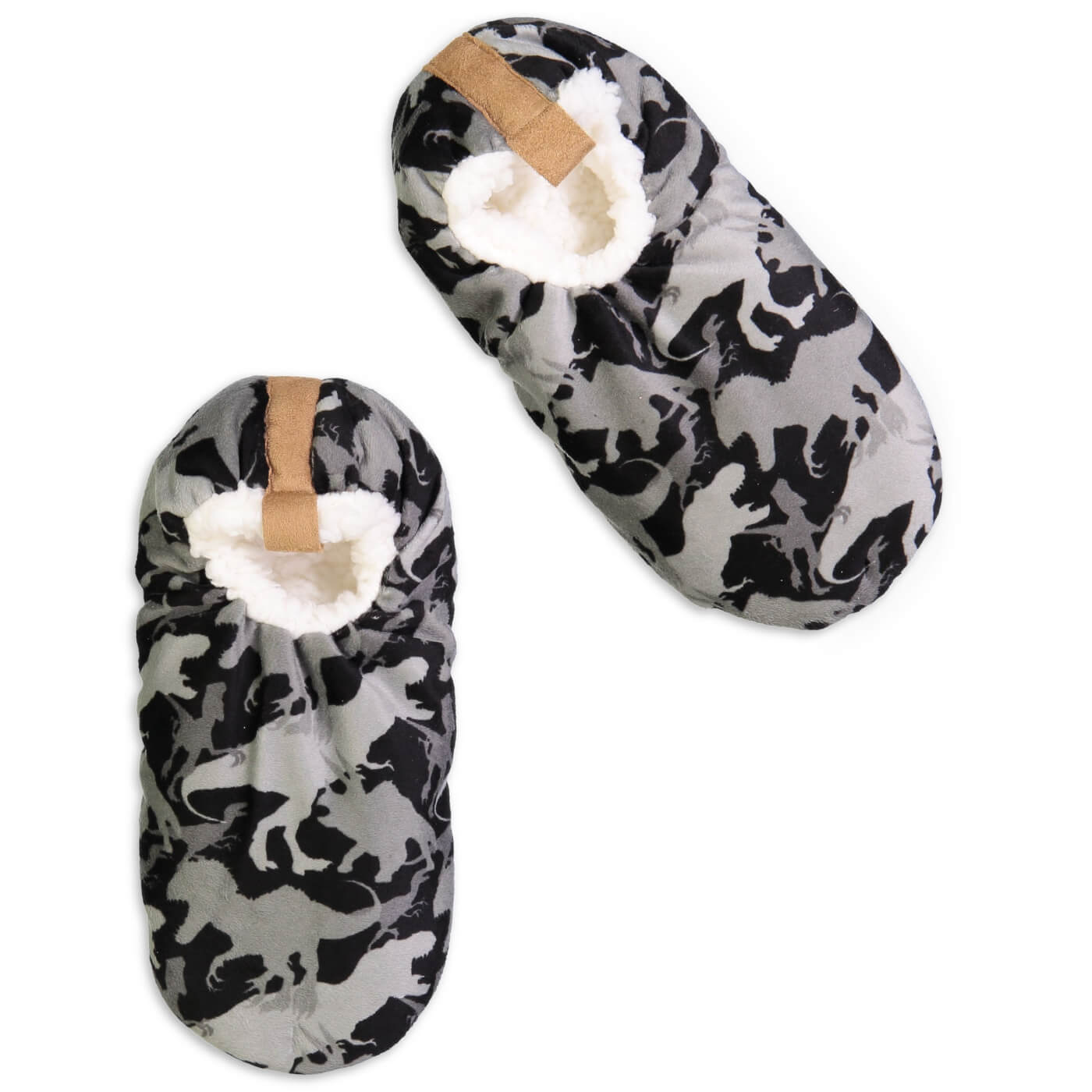 The slipper company, Fuzzy Babba, has released Jurassic World slippers that would be perfect to keep your feet cozy while marathoning the Jurassic movies! Fuzzy Babba used the silhouette of JW dinos to create a grey/black camouflage-like pattern. Now you can sport T.rex, Indominus Rex, Triceratops, and Velociraptors on your feet!

I tried out a M/L size (men’s shoe size 7.5 – 9.5), and found that they fit perfectly for a women’s size 9.5. If you like a little more room in your slippers, I would suggest getting the L/XL. The slippers are super soft, and I loved the dino pattern!

What do you think of the slippers? Do you plan on ordering yourself (or friend) a pair? Let us know in the comments below! 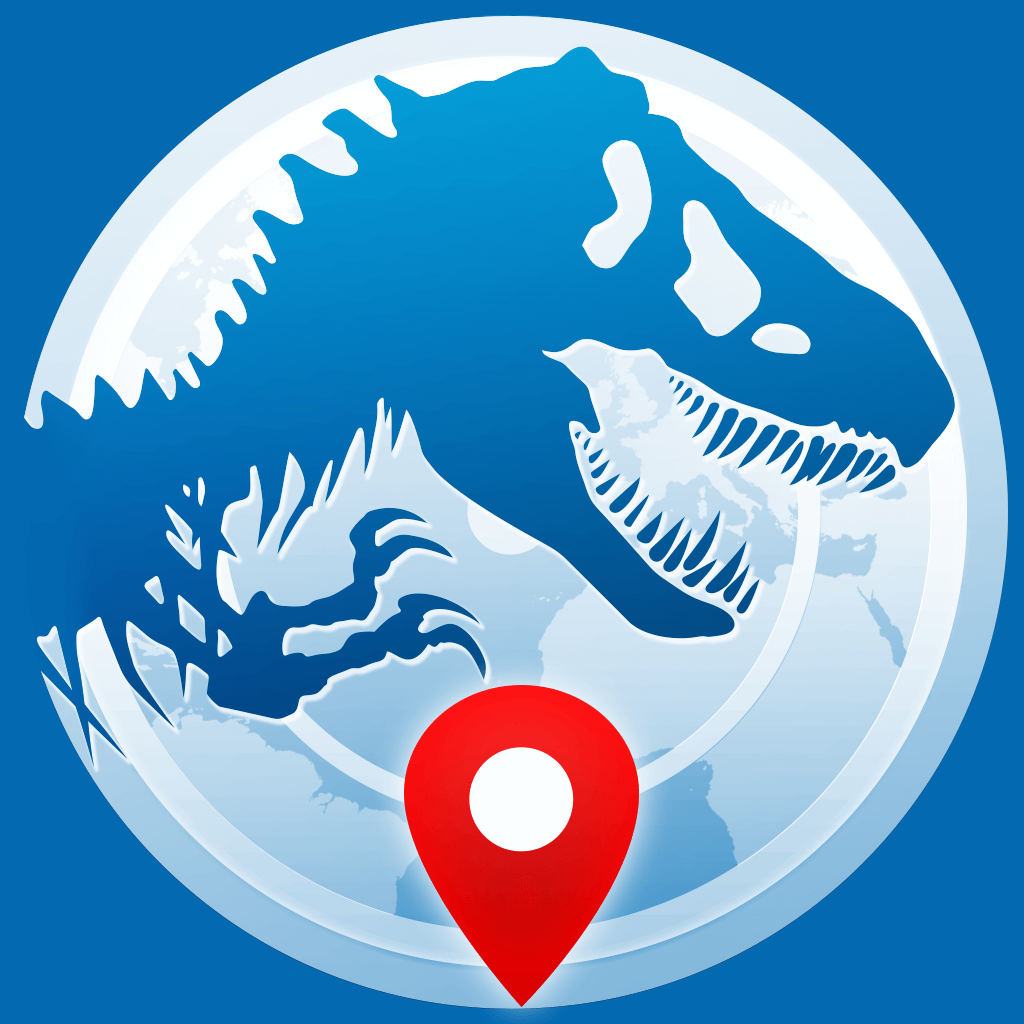 There’s a dinosaur in our backyard…

Jurassic World Alive is a new app that is sure to grab every dino lover’s attention. In the app, you are a member of the Dinosaur Protection Group (DPG), and you are on a mission to save the dinosaurs. Much like Pokemon Go, you explore your surroundings in search of dinosaurs. Once you track down a dinosaur, you pilot a drone and collect DNA samples from them. You can create normal dinosaurs, or pretend you’re Henry Wu and make some hybrids! After assembling a team of dinosaurs, you then head over to the battle area and face off against other players. Prizes for winning include (but aren’t limited to): coins, DNA samples, and darts for DNA collecting.

The app is now available for Android on Google Play, and for iOS in the App Store. Start hunting those dinos!

They’re officially ALIVE in your world! Find, evolve, and battle your favorite dinosaurs in #JurassicWorldAlive. Now available to download on the @AppStore and @GooglePlay! pic.twitter.com/gJRY6AByzk

As mentioned above, this game is similar to Pokemon Go in a lot of ways. The game uses your location for placement of dinosaurs and supply drops, and it has warnings about being safe while playing (thanks, Owen!). The drone/firing the darts can take a little getting used to, but the controls seem very responsive. All the dinosaurs in the game have profiles that detail their battle stats, which you need to pay attention to once you step into the battle area. They start you out in the Fallen Kingdom arena, and there are different battle arenas that unlock as you win more battles! Battles get more exciting as you level up you dinos (by gathering more DNA), and mixing up your team combinations. Unlike Pokemon Go, supply drops are not always at landmarks, and they appear more frequently in suburban/rural areas.

Jurassic World: Alive also has a fun AR feature, allowing you to bring the dinosaurs you’ve captured to life in the real world via your phones camera. This creates a fun photo and video opportunity many fans are already taking advantage of!

Yep, that's a giant T-Rex in the middle of the street ?

Have you played Jurassic World Alive yet? Let us know your thoughts in the comments below! 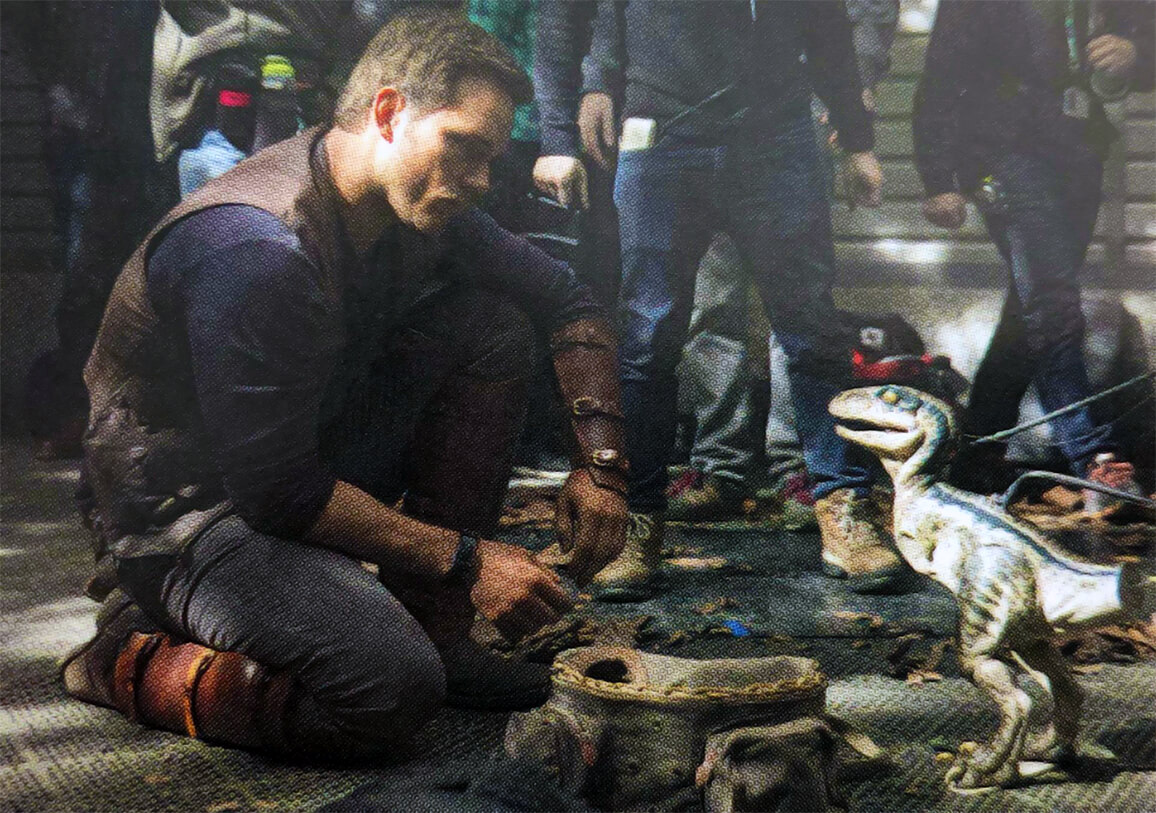 With the first impressions from the world premiere for Jurassic World: Fallen Kingdom now online, some fans may want to turn away from further trailers and tv spots for risk of seeing too much of the movie before release. If you are one of these people, but you still have a craving for something Jurassic, then a bunch of behind the scenes looks at the movie are beginning to pop up across social media!

While these still provide spoilers for some excited audience members, a behind the scenes look at a movie often discusses more of the technical aspects of making a movie, rather than outright story spoilers.

So tread carefully, but if you want to learn about the animatronics that have been designed and featured in the movie, the French magazine L’écran Fantastique have published some photos featuring a number of animatronics, as well as interviews with Colin Trevorrow about the creation of the new trilogy, and Neal Scanlan, who is the lead designer for the animatronics.

You're welcome! It is a special edition of the magazine "L’écran fantastique". I have not read the pages yet but I will not fail to come to you to share the information it contains! pic.twitter.com/x9lAu1S9n5

Blue appears to have a full body animatronic in the scene where she is on the table, and only a head will be used for other scenes. The Indotraptor doesn’t appear to be a full body animatronic, but will have a practical head, foot, and arm. You can get a feel for the size of the Indoraptor in the image of the man holding the arm. No wonder the little girl in the trailer looks so scared!

Details from the interviews were translated from the article (if you would like to avoid all potential spoilers, don’t read the details below). Thanks to Twitter user @clark595 for translating!

Here are some key details from the interviews published in the magazine! pic.twitter.com/EXiUuARxLj

Further, a Spanish publication, Academia Revista digital del Cine Español, recently featured director J.A. Bayona, and the article included storyboards and concept art from the film. A cool thing to note is that it’s referred to as ‘Ancient Futures’ on multiple images, which was the working title before it became ‘Jurassic World: Fallen Kingdom’! The magazine also shows another look at the model for the Indoraptor arm.

Finally, taking a further look at the animatronics IGN released a video on the practical effects used in Fallen Kingdom. Check it out below! 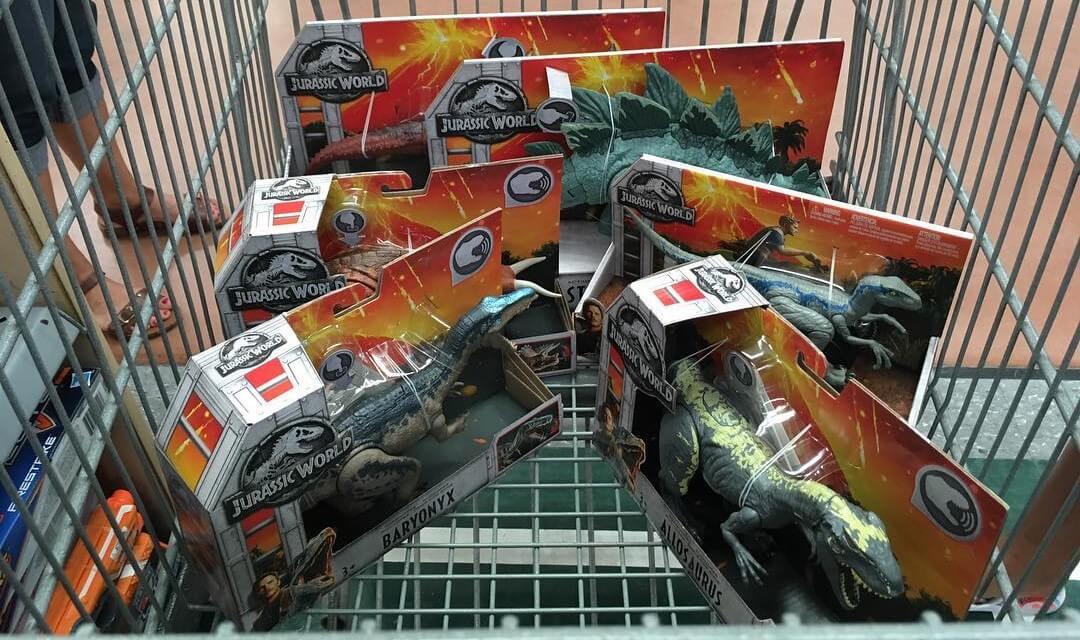 ‘Jurassic World’ toys from Mattel’s new line are beginning to show up in stores! The official release date for the toys is April 16th, but images have been showing up on social media of the toys available for purchase.

Mexico Walmart stores started stocking the toys on their shelves earlier in the week, based on posts from Instagram. The toys are were first spotted at a Walmart in Guadalajara, and many Walmart stores now have ‘Jurassic World Fallen Kingdom’ displays. It’s been reported Walmart in Mexico was given permission to begin sales early ahead of ‘Children’s Day‘ to help ensure availability.

In the US, the toys are now appearing at Toys ‘R’ Us stores. Sadly, Toys ‘R’ Us announced this week that they are going out of business, and the liquidation sales would begin Friday. As such, Toys R Us is officially ignoring street dates. Some stores are still receiving shipments, and some already have the Jurassic World toys in stock! Toy availability will be unpredictable because of the closures, so going on a dino hunting trip to your local Toys ‘R’ Us store would be your best chance at finding them. Employees should be able to tell you whether they have any on the floor, or in the back stockroom.

Toys R Us came through today! Be sure to check your stores for early releases of the Jurassic World toys! pic.twitter.com/9IxUX5iY2t

It’s currently unclear what will happen to ‘Destructsaurs’ SKUs which were meant to be exclusive to Toys R Us. While no pictures have surfaced yet, they’re likely produced and ready to ship if they have not shipped already – perhaps another retailer like Walmart, who already has exclusive ‘Battle Damage’ toys for Jurassic World will pick the items up.

While they have yet to go on sale, check out these new pics of the Target exclusive ‘Jurassic World: Legacy Collection!

If you aren’t lucky enough to find any of the toys in stores near you, we only have a few more weeks to go until the official release! US Walmart and Target stores should have toys available for purchase on April 16th.

Have you found any of the toys where you are? Tell us in the comments below! 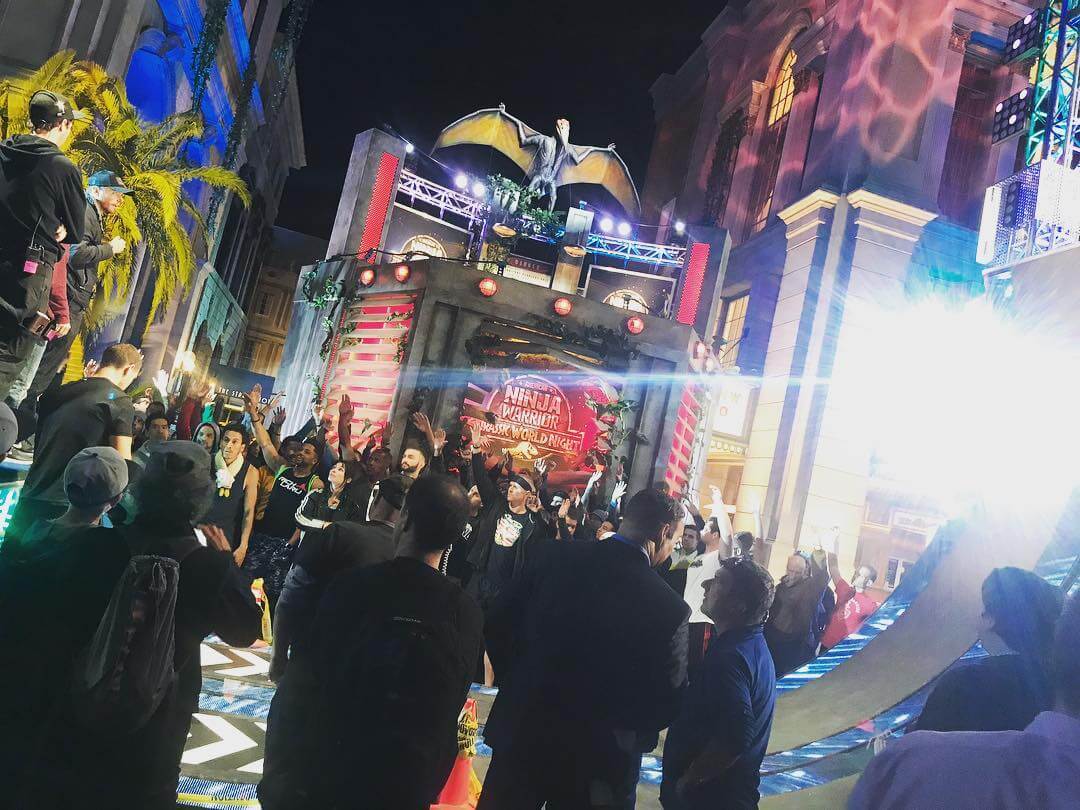 ‘American Ninja Warrior’ is a competition show that has competitors attempting to complete increasingly difficult obstacle courses. The show consists of obstacles that test the competitors’ agility, strength, and speed. The courses must be finished within a time limit for the competitor to advance, and potential win cash prizes. The Salmon Ladder, the Flying Bar, and the Warped Wall are a few of the obstacles that the show features.

The show periodically does special episodes, and it looks like we are lucky enough to be getting one with dinosaurs and Chris Pratt! Filming of this special Jurassic World Night episode was discovered when posts from the Universal Studios Hollywood set appeared on Instagram.

This follows pictures from the Universal Studios Backlot tour, where a Pteranodon prop (above) was spotted on a set under construction – that’s one mystery solved! The air date for the episode isn’t known at this time, but it will be airing as part of Season 10 of ‘American Ninja Warrior’ sometime prior to the release of Fallen Kingdom.

Are you a fan of American Ninja Warrior, and what kind of obstacles are you hoping to see in the episode? Comment below with your thoughts!